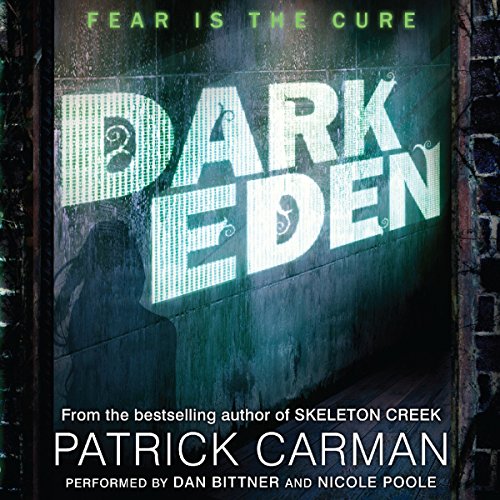 Written by: Patrick Carman
Narrated by: Dan Bittner
Try for $0.00

Fifteen-year-old Will Besting is sent by his doctor to Fort Eden, an institution meant to help patients suffering from crippling phobias. Once there, Will and six other teenagers take turns in mysterious fear chambers and confront their worst nightmare - with the help of the group facilitator, Rainsford, an enigmatic guide. When the patients emerge from the chamber, they feel emboldened by the previous night's experiences. But each person soon discovers strange, unexplained aches and pains....What is really happening to the seven teens trapped in this dark Eden?

What listeners say about Dark Eden

I teach middle school, so I read/listen to lots of books for kids and teens. The first five hours of this book reminded me of plots from some other stuff I had read, so I guessed early on some of the plot "twists." (which is why I gave it 4 stars instead of five) However, I did NOT see the final 40 minutes coming! The ending was great!

I think if I was a kid (who hadn't read as many books as I have), the whole book would have me on the edge of my seat. So, I think this would be a great book for kids. It's clean (only a very few cuss words) and it could be scary.

Dark Eden tells the story of seven fifteen-year-old kids with crippling fears. They are brought to a place (suggested by their therapist, Dr. Stevens) in middle of the woods where there is a fort and another building to be "fixed" by a mysterious man named Rainsford. From the start, Will Besting (our narrator) refuses to go into Ford Eden and, instead, places himself in the other building where there is a bomb shelter in the basement. In this room, he is able to see what is going on by viewing a few screens that show him three places: the main room, where the girls are cured, and where the boys are cured. The whole time, Will knows something is wrong and doesn't trust any of the adults who, by what they've said, only want to help. After viewing the first treatment, he knows that the last thing he wants to do is to fall in line and be cured by this malevolent man.

I won't say that the book was bad and I won't say it was good. I will say that it was an okay story and it did keep my interest for most of the time listening. I do think that if it had been any longer of a book (because this book is VERY short) that I wouldn't have been able to enjoy it as much as I did. The reason I am giving the story a C+ is because I consider to be an average story with added umph. I've given books F's, D's and, on the very rare occasion, somewhere in the A territory. I think this one is a solid YA novel and is very enjoyable; however, you're not going to go to work or school and tell people you've found the new Divergent, Hunger Games, or anything other insanely popular YA novel. I do believe that it was written better than Suzanne Collins wrote The Hunger Games, so it does have that going for it.

The narration was great. Normally, I'd wonder why the heck they have a female narrator doing the dialogue for Dr. Stevens and Mrs. Gorand at the end; however, there was just something so ominous in Dr. Stevens' dialogue that I found Nicole Poole to be absolutely incredible with her quick and disturbing speech. Dan Bittner was a solid narrator as a teenager. I'm sure he's in his twenties, so it's not too far-fetched, but he expressed himself well and never gave the impression of trying too hard to do the female voices.

In closing, I do want to say this. There is a sequel to Dark Eden called Eve of Destruction and I will say that there is a 50/50 shot that I will continue the story. Yes, there is a cliffhanger, but it is nowhere near as necessary of a sequel as other books with followups. I've read standalones that have cliffhangers on purpose that are way more unsatisfying than Dark Eden. (By the way, I love those kinds of books, so I'm not knocking them at all!). I just can't decide if the sequel will ruin what I liked of the story or not. I think I'm going to take a break, read a few other books, and then make a final decision. So, eventually, you may see a review for the sequel; however, for the next few months (possibly a year), this is where I'm going to leave Will Besting and his friends.