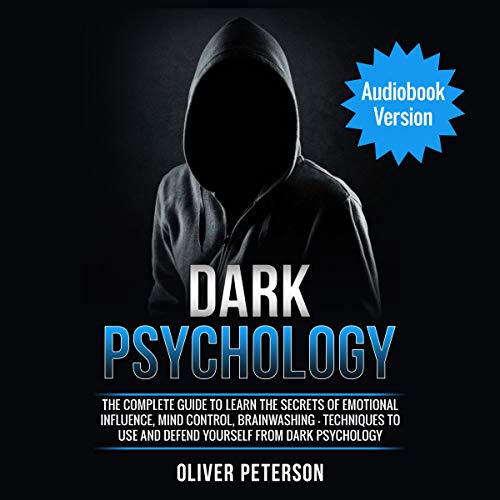 Written by: Oliver Peterson
Narrated by: Gary Ladka
Try for $0.00

Uncover the secrets behind narcissism, psychopathy, machiavellianism, and more.

Dark psychology is a powerful psychological technique used to control and manipulate us. Those in the “Dark Triad” often use these tactics to influence and abuse their victims. But now, you can unlock the secrets behind dark psychology, identify their tactics, and defend yourself against those who seek to do you harm.

With a detailed analysis of the fundamental dark psychology manipulation strategies, as well as a breakdown on the three personality types in the "Dark Triad", now you’ll be able to protect yourself against dark psychology and never fall victim to their tricks!

Here’s what you’ll discover inside:

With reference to the underlying motivations of dark psychology users and what makes those in the "Dark Triad" think, as well as how you can stop emotional abuse and reclaim control of your life, this audiobook is a must-listen for anyone looking to gain a deeper insight into the psychological tactics that influence us.

Buy now to uncover the secrets behind Dark Psychology and learn how to protect yourself today!

What listeners say about Dark Psychology

This is an amazing guide for beginners looking to learn about defend yourself from dark psychology.

This audio book helped me to understand myself

A useful reference for protection from dark influences. It helped me understand my life. The content of this audio book was so much helpful for the beginners.

I really appreciate this audio book

I will suggest my friends to follow this audiobook

I enjoyed listening to this audio book that reinforces what I use in my practice. This audio book is a wonderful gift to yourself and to your friends!

I am exceptionally happy with this audio book

This audio book provides valuable information. This is a great audible to learn the secrets of emotional influence.

This is a very interesting audible for listening

A great audio book about Dark Psychology. Very interesting listen and very easy to apply to your daily life.

Not bad this audio book


The audio book has not helped me a lot to learn about this and I think this topic is not very informative for those interested!

This audiobook I can find lots of things.

This audio book I can find lots of things its help on how to listen other people. This audio book is a great audio book that is well explained and easy to understand. Totally recommend the audio book worth the buy.

This audible is eye-opening

This is an excellent audible. Everyone would love to have an extra source of income. Pretty good audio book and its great advice. Nice easy listen. Recommended.

This book is easily comprehensible by the listener

This audio book will give the listener the top hand so they can be on the lookout for these poor people. I discovered an Amazing aide for me.