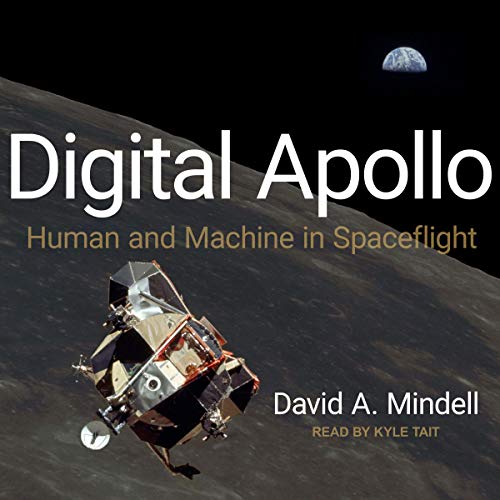 Human and Machine in Spaceflight
Written by: David A. Mindell
Narrated by: Kyle Tait
Length: 13 hrs and 36 mins
Categories: Science & Math, Astronomy
4.5 out of 5 stars 4.5 (2 ratings)

Written by: David A. Mindell
Narrated by: Kyle Tait

As Apollo 11's lunar module descended toward the moon under automatic control, a program alarm in the guidance computer's software nearly caused a mission abort. Neil Armstrong responded by switching off the automatic mode and taking direct control. He stopped monitoring the computer and began flying the spacecraft, relying on skill to land it and earning praise for a triumph of human over machine. In Digital Apollo, engineer-historian David Mindell takes this famous moment as a starting point for an exploration of the relationship between humans and computers in the Apollo program.

Digital Apollo examines the design and execution of each of the six Apollo moon landings, drawing on transcripts and data telemetry from the flights, astronaut interviews, and NASA's extensive archives. Mindell's exploration of how human pilots and automated systems worked together to achieve the ultimate in flight - a lunar landing - traces and reframes the debate over the future of humans and automation in space. The results have implications for any venture in which human roles seem threatened by automated systems, whether it is the work at our desktops or the future of exploration.

This is a wonderful synopsis of a much underrated and forgotten tool. I really got an appreciation for all of the things that the hardware and software folks went through to pull off this magnificent feat. Its definitely worth the time!

This book provides a sort of test pilot’s analysis of what it’s like to land on the moon… The last several chapters encompass the Apollo 11- through 17 landings — and are particularly interesting.

In addition, this is one of the few audiobooks in which the narrator correctly pronounces all of the names of the era – – and all of the acronyms correctly.

I recommend it highly for manned space enthusiasts

Having lived through the Apollo era I had many gaps in my knowledge base filled in.

I find the narrator's style stilted and irritating. Also, in the first chapter, the author is ascribing the 1201/1202 program alarms to crew workload problems due to Aldrin having to manually aim the docking radar. This is surrounded by a lot of emotional puffery about how we're going to explore the relationship between men and machines in this book.

These landing alarms and the computer resetting were due to Aldrin disregarding mission procedures and leaving both the docking radar and the landing radar on at the same time. He was supposed to shut off the docking radar as they began the descent phase of the flight, and he did not. The computer was not intended to be able to handle the volume of data from both radars at the same time, and so it kept overloading, throwing those alarms, and resetting. It was crew error which caused these alarms, not "electronic noise" (whatever *that* is supposed to mean) as the author claims.

If I can't trust the author to get this key technical detail correct in the first few minutes of this account of one of the outstanding moments of human history, how can I trust anything else he says? If this was "Apollo: an Emotional View" or something, I wouldn't care, but I bought this book because I thought it would go into technical aspects of Apollo. Spaceflight is a technical endeavor, and details matter: it's not interpretive dance or something like that.

I am a great admirer of Buzz Aldrin, and I think he was a hero of American Spaceflight, a patriot, and an awesome fellow all the way around. I don't think he was a failure because of this error, and I have heard this alarm event described as understandable from a piloting point of view. It is not my intention to denigrate Mr. Aldrin. But I do feel it is important that anyone considering buying this audiobook understand that the author of this book has taken liberties with the truth.

I was unable to finish this book because the narrator's performance was giving me a headache. Also, as a computer scientist I was disappointed to find more opinion and less science than I expected about human/computer interaction.

Dry, and a terrible reader!

I wanted to know more about the Apollo computer, and while this book does deliver on that, it just isn't very good. First, I really couldn't care less about the humans vs computers thing (the premise of the book), as I'm sure most people who aren't pilots would agree. Second, the book is VERY dry and pretty dull. Lots of acronyms and too much detail in limited areas instead of a broader, but less detailed examination. Third, the reader/narrator is TERRIBLE. His voice sounds exactly like one you'd find on a corporate training video about how to use a file cabinet. Also, he hovers on the last syllable of most words, which is very annoying. I almost put the book down just because of his voice, which is the worst I've heard of the maybe 80 audio books I've listened to.

I am an Apollo fan so found the story and main points interesting, even if some of the highlights are pretty well worn by now.

The narrator frequently ended phrases with a breathy sustain that I found unbelievably annoying. This forced affectation persisted for the entire reading, although it seemed to get better toward the end of the book. It was very hard to acclimate to it.