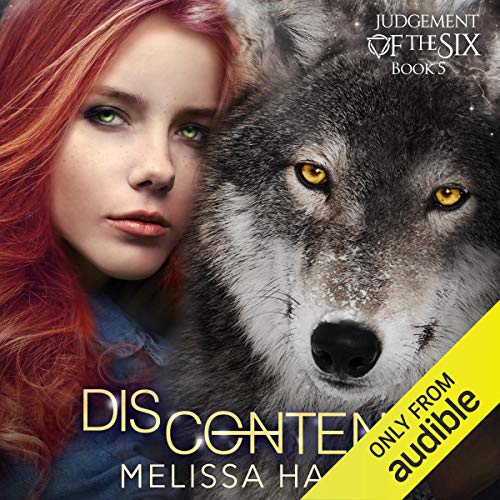 Written by: Melissa Haag
Narrated by: Lisa Cordileone
Try for $0.00

I hate. I thought I hated before the letter, before the werewolves, but now I understand that was nothing more than a chip on my shoulder. The urbat took what was mine. And they will pay.

Isabelle leads a very normal life...for an emotional syphon. If not for Ethan and his bar, she would have lost her sanity long ago. But everything changes with the crash of her fighting cage and a man who transforms into a wolf.

There's something about Carlos - when he's not growling at her - that makes her do things she wouldn't normally do, like sigh and daydream. Attraction aside, she is faced the very real evidence that werewolves and urbat exist, and the urbat are after her. And the only way she can keep Ethan safe is to join with the werewolves and Carlos. It's a race against time to stop a war, fight for love, and find the last Judgement.

What listeners say about (Dis)content

(Dis)content is an apt description.

The book itself is a very good but the narration is barely tolerable. The previous 4 books had excellent narrators so for me this was a huge let down. As a person that commutes 2-3 hours daily I tend to listen to books on audible quite often so for me it is important that all of the books in a series are on audible which in this case the FINAL book is not. Huge let down!! I will finish reading the series because as I stated it is very good but I will not be revisiting it again until the last book is available on audible. This seems to be a growing trend where one book in the series is not on audible or one of the books is at full price while the others are discounted when the book is also purchased it really is frustrating. Bad business if you ask me, so buyer beware.

the book was great, I ended up getting it in ebook format to finish it. for some reason I just couldn't get into it with this reader

Favorite in the series.

I never leave reviews. I love this book. Can't seem to get enough. This is one of my go to books; I listen to it over and over.

I think book three started a good change. I loved how Isabelle's character was portrayed. She was fierce! I just knew the authors were going to kill him (sorry, don't want to mess it up for you by revealing who died). I liked his character, he was loyal and protective. Though he wasn't right for Isabelle, I wish they would have done something different with his character than killing him.. I found Carlos alittle sneaky and impatient, but I loved his character the most. He was rough and tough, but with a soft, caring and protective side.

Although this is a novel about Isabel, Carlos and his quietly romantic personality shines bright. Swoon...his humility, bravery, and gentleness is exactly what all women look for in a man.

The gang of werewolves find Isabel, but she had a human friend who gets involved with the gang by association. Ethan has known Isabel since primary school and is always there when she needs him. His death at the hands of their enemies nearly breaks her, but with Carlos' quiet spirit and his ability to calm his emotions, he wins her affections.

The plan is to reveal that their ate other species in the world and they get on a national news station and make their presence known and that another group of werewolves ate trying to take over the world. The judgements hope this will gain support from the humans to eliminate the Ernst.

The whole series is captivating. Melissa​ Haag writes wonderfully, and I can not wait for more!

Loved the story, not the narrator.

Would you consider the audio edition of (Dis)content  to be better than the print version?

The print version is better. The narrator has a pleasant voice, but she's not so great at narrating.

What was one of the most memorable moments of (Dis)content ?

One of the most memorable moments was the battle in the field. It was well written and intense.

She takes breathes at awkward moments and she doesn't make each character sound different. I had no idea who was talking until the book let me know. Each woman besides the main character sounded the same and each male sounded the same. She tried to make one elder sound older, but seemed to quit half way through the book.

Not as good as the other ones in the series but definitely worth the read.