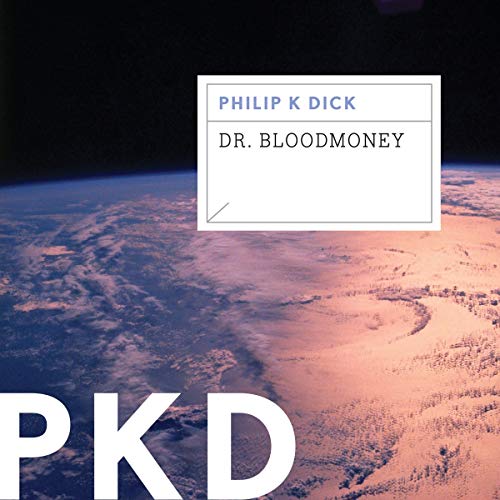 Dr. Bloodmoney is Philip K. Dick's darkly comic riff on Dr. Strangelove, a look at how humanity gets along after the end of the world. This Nebula Award nominee has all the wild characters and twisty science fiction plotting that Dick fans know and love.

What happens after the bombs drop? This is the troubling question Philip K. Dick addresses with Dr. Bloodmoney, or How We Got Along After the Bomb. It is the story of a world reeling from the effects of nuclear annihilation and fallout, a world where mutated humans and animals are the norm, and the scattered survivors take comfort from a disc jockey endlessly circling the globe in a broken-down satellite. And hidden amongst the survivors is Dr. Bloodmoney himself, the man responsible for it all. This bizarre cast of characters cajole, seduce, and backstab in their attempts to get ahead in what is left of the world, consequences and casualties be damned. A sort of companion to Dr. Strangelove, an unofficial and unhinged sequel, Dick's novel is just as full of dark comedy and just as chilling.

What listeners say about Dr. Bloodmoney

Dr. Bloodmoney is Philip K Dick's version of middle class suburbia after the bombs fell. From a paranoid, delusional Dr. Strangelove to a thalidomide victim who is suddenly "handy" after the fallout, a random hodge-podge of characters struggle to survive without hope of a return to a pre-cataclysmic period. The only unifying activity is a solitary astronaut with a 50's DJ attitude in orbit with abundant supplies as a result of a failed mission to Mars.

Dick's sci-fi elements take a backseat to his more prominent social commentary of people struggling to either hold on to some semblance of normality versus those who view the opportunity for cutting loose. There is some degree of space exploration as well as psychic-like powers. Dick also envisions technology coming to the aid of the physically handicapped.

The narration is rather decent with a good range of character distinction of both genders. Pacing is quite natural and being on the shorter side results in a quick listen.

great narration, and with dick you cannot lose

yet another gem. if you like humanized visions into the far out and enchanting, dick is your man. hoody hoody hoo.

enjoyed this book enough to finish it :)

enjoyed the story and the performance. although not as thought provoking as some other books. the broken messed up characters seem unique to Philip and that makes it unique art

Second PKD book and helped me decide I'm just not a fan. The characters are boring, cartoonish, and not believable, the story is boring with no compelling conflict whatsoever. For the second time I'm left with the feeling that it's just a bunch of loosely associated things thrown together in cartoonish fashion. Wish I had my time back

its wonderful to do projects with. I don't like talking about the book, because it gives you an Idea of what to look for. I my self just jumped right in, knowing it was up my ally. its written by Philip K. Dick. I have always enjoyed it.

Wow! To imagine how the world lived—at the edge of the cliff. I do remember as a first grader having drills, getting under our desks. Which looking back was a just a fun waste of time. To think our parents, our leaders were dealing with the life ending scenario. As Mr. Dick has stated, he truly believed WWIII, was eminent…

It is a book that I like when I read or listen to it. But I don’t think of myself as liking it. Now I come to expect to like it even though I never remember why.

I read this book years ago and didn't care for it. At some point I reread it and listened to the recording and liked it. Now, I've listed to it two times since I got it on Audible last week, and I like it better the more I listen to it. I recommend the book.