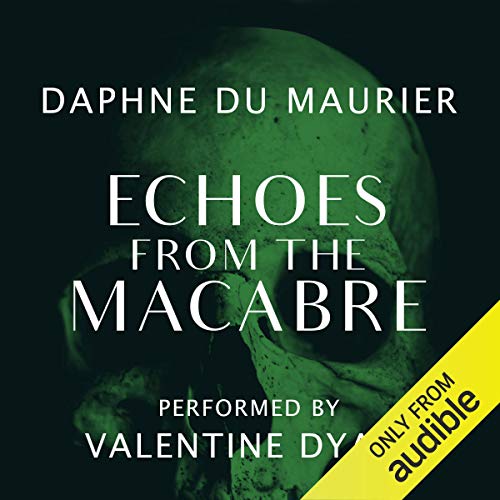 Echoes from the Macabre

Echoes of the Macabre is a selection of some of Daphne du Maurier’s most beloved short stories. This Audible Exclusive is narrated by the famous voice and radio actor, Valentine Dyall.

'Don’t Look Now': a couple who are grieving their child’s death end up encountering two old women who supposedly have second-sight while on a break in Venice. What ensues is a heart-wrenching series of strange events that eventually turn violent.

'Not After Midnight': a schoolteacher becomes obsessed with a wild man he encounters on the island of Crete.

'The Birds': a disabled farmer tries to protect his family from the onslaught of birds that try to invade his home. He learns from the radio and what he has seen himself that the birds will stop at nothing and will attack without mercy.

'Kiss Me Again, Stranger': a young man is smitten with an usherette and decides to sit with her on a late-night bus - only she has a dark secret.

'The Old Man': a man watches the daily life of his neighbour that he has nicknamed, ‘The Old Man’, but then ‘The Old Man’ commits a despicable crime.

Daphne du Maurier (1907-1989) was a British writer whose work is still greatly appreciated to this day. Her novel Rebecca is probably her most famous piece of literature, but she also had substantial success with her short stories. Her popularity and prowess are evident by the fact that Alfred Hitchcock chose to adapt both Rebecca as well as her short story ‘The Birds’ into feature films.

Valentine Dyall is one of the most well-known voice actors of the 40s and 50s. He was a regular narrator of stories on the radio and his success meant that in 1949 he was given his own radio series, The Man in Black.

What listeners say about Echoes from the Macabre

The book is better than the movie

Would you consider the audio edition of Echoes from the Macabre to be better than the print version?

I bought this mainly for one story, The Birds. I had the audio version of this on cassette and it had eventually fallen apart. This was the version I had and this reader is amazing. So this review will be mainly on the one story, although all the stories are good, this is my favorite.

What was one of the most memorable moments of Echoes from the Macabre?

Nat's discovery of the death of his neighbors and employers the Triggs. Very creepy and quite unforgetable.

Have you listened to any of Valentine Dyall’s other performances before? How does this one compare?

IT SCARED THE HELL OUT OF ME!!!! The first time I listened to this, I was driving to Chicago alone, late at night. In the dark. No lights. Again, ALONE!!! Need I say more?

This is a collection of DuMaurier's lesser known stories. It should be heard or read,these should never be forgotten. It won't be by me, that's for sure.