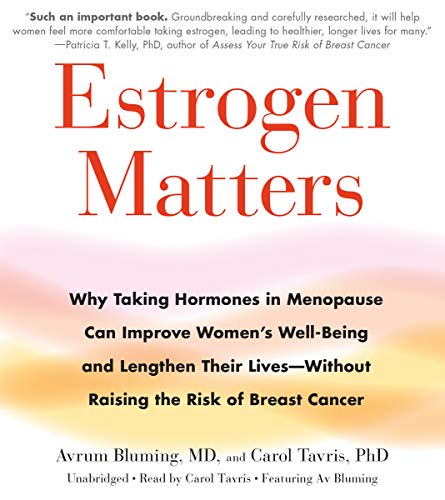 A compelling defense of hormone replacement therapy, exposing the faulty science behind its fall from prominence and empowering women to make informed decisions about their health.

For years, hormone replacement therapy (HRT) was hailed as a miracle. Study after study showed that HRT, if initiated at the onset of menopause, could ease symptoms ranging from hot flashes to memory loss; reduce the risk of heart disease, Alzheimer's, osteoporosis, and some cancers; and even extend a woman's overall life expectancy. But when a large study by the Women's Health Initiative announced results showing an uptick in breast cancer among women taking HRT, the winds shifted abruptly, and HRT, officially deemed a carcinogen, was abandoned.

Now, 16 years after HRT was left for dead, Dr. Bluming, a medical oncologist, and Dr. Tavris, a social psychologist, track its strange history and present a compelling case for its resurrection. They investigate what led the public - and much of the medical establishment - to accept the Women's Health Initiative's often exaggerated claims, while also providing a fuller picture of the science that supports HRT.

A sobering and revelatory listen, Estrogen Matters sets the record straight on this beneficial treatment and provides an empowering path to wellness for women everywhere.

"This book is long overdue. Having spent over two decades advancing women's health, I was appalled by the Women's Health Initiative's efforts to sensationalize and distort their own findings to promote an anti-hormone-therapy agenda. Personally I have been taking HRT for over 25 years and have no intention of stopping. I hope Estrogen Matters draws enough attention to counter the fears and misinformation about HRT that so many women, and their physicians, still hold." (Phyllis Greenberger, MSW, former president and CEO of the Society for Women's Health Research)

"For far too many years women and their doctors have been held in fear of prescribing estrogens - believing that they were dangerous because of a widely quoted study purporting to show that they were too damaging. Now it turns out that this seems to have been an example of 'fake' news. In a thorough, careful, and unbiased assessment of all the scientific evidence, Bluming and Tavris debunk this most widely quoted work and show that estrogens are not only not dangerous but beneficial for the vast majority of women suffering from post-menopausal symptoms, whether or not they have had breast cancer. This extremely valuable message deserves to be widely disseminated." (Lord Turnberg, former president of the Royal College of Physicians)

"This is such an important book, I want to do all I can to encourage every woman to read it. Groundbreaking and carefully researched, Estrogen Matters provides essential information about the many benefits of estrogen at menopause and even after a diagnosis of breast cancer. It reveals the misinterpretation of study results that led women (and their doctors) to have unwarranted concerns about estrogen use. The thoughtful information presented here will help women feel more comfortable taking estrogen, leading to healthier, longer lives for many." (Patricia T. Kelly, PhD, specialist in cancer risk assessment and author of Assessing Your True Risk of Breast Cancer)

What listeners say about Estrogen Matters

This is a fantastic up to date medical review of the literature, written for the woman who needs the truth about estrogen risks and benefits and also for the health professionals that don’t have time to sift through the science themselves. Well written and importantly well read by the authors.

I learned a lot that will positively affect my life. I recommend it for all women near or at menopause.

Compelling book all women in mid-life should read

As an internist and proponent of women's health, I was overjoyed when I started reading this book and realized how well Drs. Bluming and Tavris were able to tell the story of hormone therapy's ups and downs, how confused the medical community became when the Women's Health Initiative study was released, and how we can all re-examine the data and make sense of it. The messages in this book are clear, evidence-based and balanced. I hope this will help all medical professionals and patients realize the benefits of hormone replacement therapy for the vast majority of women.

So helpful to have the research organized and presented -well read by one of the authors- a pleasure to learn all of their findings.

I feel that the causal mysteries of my brain fog, concentration, mood, "osteopenia" and finally, breast cancer diagnosis has finally been illuminated through this book. My last two hormone panels have shown a clear decline (tanking in fact) of my hormones. I am only in my late 40s! I am so grateful for this information that I will absolutely be sharing with my medical team.

As someone with a family history of cancer I’ve been told not to do HRT and have suffered but reading this book I have a whole new perspective on the facts.

A sincere thank you to the authors Dr Avrum Bluming and Carol Tavris for their monumental efforts sorting through the confusing data and getting the facts out to women who need it. They have made a convincing case that it is not necessary for women to suffer through bothersome or debilitating symptoms due to either false or over trumpeted potential health risks of hormone therapy. Many of these fears are the result of the flawed and misleading WHI study which is convincingly critiqued in the book. They also present the many additional studies on hormone therapy that either contradict the “elevated breast cancer risk” conclusion of the WHI or demonstrate the added benefits of estrogen therapy on bones, heart and brain health. These benefits likely outweigh the risks for most women, if hormone therapy is initiated within 10 years of menopause and are in addition to the benefits of alleviating bothersome symptoms. The information in the book is based on scientific facts, not on biases or preconceived beliefs. It is now my view, that it is borderline malpractice for physicians not to at least consider these facts while discussing hormone therapy as a treatment option for their patient’s estrogen deficiency symptoms.
Don’t go down the misinformation trap of the internet or expect the typical health care provider to provide up to date accurate information on this topic. This book will help us all breakthrough all the noise and roadblocks health care system. If you are suffering and wonder where to look for reliable information, I urge you to buy this book to help you to have an educated discussion with your doctor. Estrogen Matters but Truth Matters too! : )

The authors present the facts and disprove the lies around estrogen therapy clearly and concisely. They show that the facts in favor are decisive. They also demonstrate along the way the harm that may result when people abuse science for their own ends, and the importance of following the reliable evidence wherever it leads, regardless of one’s biases. Highly recommended.

As a peri-menopausal woman, I've been on HRT for a year now. Estrogen has been holding its own until very recently. A few months ago my doctor said it had fallen off and recommended estrogen replacement. I hesitated. I wanted to do some research first. We've heard so many scary things. Turned to a group of woman online who recommended this book. It was awesome!! Not only did it provide outstanding considerations and input for me but also provided several sources of reference I then when and researched further. Thank you!!

Thank you for your consistent effort in providing the best HeathCARE to your patients and others .

Absolutely loved learning the true info. The misinformation we have been lead to believe is dead wrong.