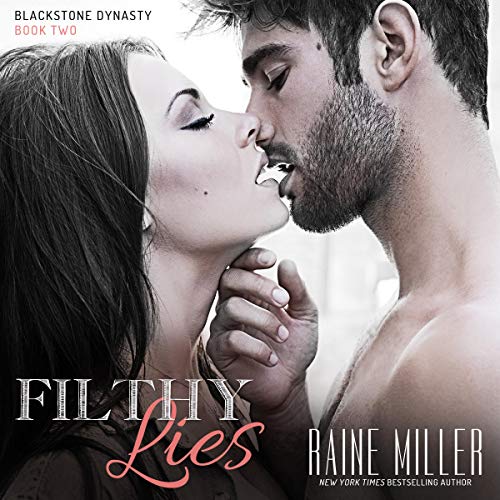 On the day I turned 15 years old, I knew I loved James Blakney. There was a look in his eye that told me he’d finally noticed I existed in a realm beyond best-friend’s-much-younger-off-limits-don’t-even-think-about-it-little-sister.

Call it womanly intuition, despite the fact I was barely qualified for being an actual woman at just 15 - and only in the biological sense - but still, I knew I loved him.

What I never expected from him was a proposal of marriage nearly eight years later. I know it's not supposed to be a real marriage, but James is certainly making it feel that way.

He's also hiding something from me.

But I've hidden the truth from him as well.

So many filthy lies.

What listeners say about Filthy Lies

I hate to give this review but I need to look out for my fellow Audible readers. Buy the kindle version of this book. I haven't read anything from Raine Miller that I didn't like. I don't want to include the female lead in this. She was fine. The male narrator was so confusing to me. He has a soothing voice but has NO inflection. He has the potential to be really good if he reads the story and not just the words on the page. Very robotic!

I loved this author.. THE BLACKSTONE BOOKS ARE AWESOME.I don't know what happened but this book is REALLY horrible..the poor monologue narration destroyed any hope it had to save this book.
the characters were not developed..you have no idea who is speaking..there's no change in the narrator's tone male or female..
my guess is the author needed the money so she put something out there..because this book SUCKS
I wouldn't recommend it if they were giving it AWAY
Good luck..you've been warned!

I’ve read all the Blackstone series, but the voices for this book were just awful! Jamie’s voice was flat and so monotone I could hardly listen to him! The storyline was good and love Winter and she went through to find love, I’ve read all the books, but this audio was not enjoyable, I just wanted it to be over!

Having downloaded most all of Raine Millers books, none was a disappointment like this Audible book. The story is difficult to follow because of the narration. As many have already said, the narrator sounds board, nor intonation, and a real lack of emotion. All the characters sound the same. I was hoping the narration would improve , I stopped listening just under the 2 hour mark and couldn't go on. I hope the author and Audible rerecord this book....it could only get better. Even though Audible allows for 'returning and refunding , I won't because I did read the reviews and still made the decision to make the purchase........a major disappointment. Save your credits and/or $$$. Looking forward to the next Raine Miller audiobook.

I read filthy rich and really loved it so much that i approached the author for a free audible of filthy lies and received it next day I appreciate the gesture very much.
Coming to the story this book is about james and winter who secretly love each other since childhood how there love unravels is to be read.This is a simple love story Beautifully told.Love this series
Can't wait for Lucas and Victoria book hopefully its comes soon

This was a beautiful story of love.
Love is patient, love is kind and it's more beautiful when it is shared with each other.

I am really sad to say that as good of a story as this was, I think it would have been a much better read because sadly the narration was really poor and didn't do the author, the book or the characters the justice they deserve.