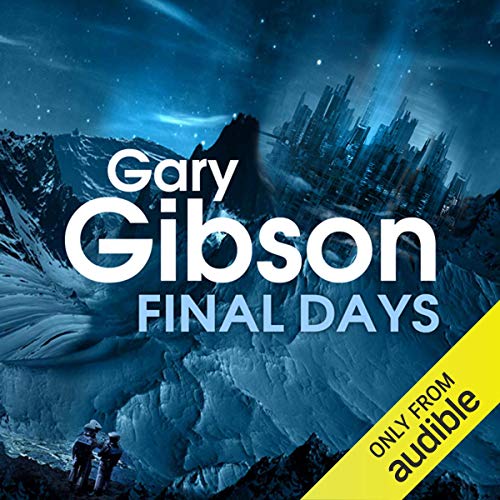 Written by: Gary Gibson
Narrated by: Nigel Carrington
Try for $0.00

It's 2235 and through the advent of wormhole technology more than a dozen interstellar colonies have been linked to Earth; but this new mode of transportation comes at a price and there are risks.

Saul Dumont knows this better than anyone. He's still trying to cope with the loss of the wormhole link to the Galileo system, which has stranded him on Earth far from his wife and child for the past several years. Only weeks away from the link with Galileo finally being re-established, he stumbles across a conspiracy to suppress the discovery of a second, alien network of wormholes which lead billions of years into the future.

A covert expedition is sent to what is named Site 17 to investigate, but when an accident occurs and one of the expedition, Mitchell Stone, disappears, they realize that they are dealing with something far beyond their understanding.

When a second expedition travels via the wormholes to Earth in the near future of 2245 they discover a devastated, lifeless solar system—all except for one man, Mitchell Stone, recovered from an experimental cryogenics facility in the ruins of a lunar city. Stone may be the only surviving witness to the coming destruction of the Earth. But why is he the only survivor—and once he's brought back to the present, is there any way he and Saul can prevent the destruction that’s coming?

What listeners say about Final Days

Great science fiction. Gripping action, the reader is plunged into the mystery from the very first pages and is immediately taken in by the story. The story is apocalyptic and is given from the perspective of a number of key characters. It revolves around ancient artefacts created by an unknown race and the technology of wormholes used by humanity in the present time of the book.

All in all, an average read.

Note: Ignore the description provided with this audiobook, that one is actually for the 2nd installment in this series (not yet released) entitled, Thousand Emperors.

Final Days takes place in the early 23rd century. Wormhole technology has allowed colonization of distant planets. In the current galacto-political structure, Earth continues to dominate by maintaining a hub and spoke structure for the wormhole configuration. In other words, all travel is between Earth (more properly, the moon) and the colonies. Inter-colony travel is not permitted. This imposition has led to separatists movements attempting to rectify the situation and a heavy handed, almost totalitarian response by the Earth oligarchy. Added to this volatile mix is the recent discovery of alien artifacts suggesting advanced technology that results in the realization that Earth is doomed and drastic measures will be needed to secure the ruling hierarchy's survival while maintaining secrecy.

The sci-fi elements are well done and integrated without overwhelming the story. In addition to wormhole technology and aliens, an interesting twist on time travel is presented. Pacing is uneven and begins very slowly as multiple plot lines are created to introduce the characters. Much of this early action is peripheral to the overall plot. In addition, the initial focus on individual characters is unrelated to their involvement for the rest of the story (this may be tolerable if those characters are involved in later installments, however). Unfortunately, the multiple plot twists near the end, make for empathy whiplashs in terms of who and what to be rooting for as the tale climaxes. The finale is a bit of a head scratcher. Hopefully the next installment will reset the story arc.

The narration is well done and the range of voices is more than adequate.

Foreknowledge of the apocalypse

Gary Gibson's "Final Days" was equal parts action/thriller and far-thought SF that forces the reader to consider the purpose and motives of aliens so far removed from our own time that the stars and their galaxies have all burned out to embers, and the dilemma of Free Will in an observed time-loop.

The braided story lines of the main protagonists merge closer and closer together as the novel reaches its climax, and at no point does the momentum or adrenalin ebb for long. Cliché as it sounds, this truly is a 'non-stop' storyline where the characters are all pursued with deadly consequence and the very highest of stakes. There are several moments where one character unravels a portion of the story's mystery already known to one of the other characters, and the reader is rewarded with a goose-bump irony that is the privilege of omniscient narration. However, this kind of scene plays out one or two times too often for my tastes, and instead becomes tedious recapping. Overall, though, the pacing is quite balanced and holds the attention throughout.

At a more thought-provoking level, a scientific speculation about limited forms of time-travel enabled by accelerating one end of a wormhole to relativistic speeds, leads to a very intriguing situation: Can one change the future glimpsed by such means? The author credits scientists Kip Thorne and Ray Kurzweil with the original concepts he exploits for his plot. He ramps the wonder up by introducing a future alien civilization which has extended this technology to its very furthest extents, and then confronted the resulting dilemma of achieving free will when your future has already been observed, and therefore, determined. These same questions play out in smaller scale by the main characters who are trying to either escape or prevent the imminent destruction of the Earth.

"Final Days" will appeal to fans of Peter F. Hamilton and Neal Asher, synthesizing the strengths of each.

Solid three because the narrator clearly agrees with me there. It's mediocre space opera, and that's just because there's lots of characters. The time travel element implies everyone is moving through a separate timeline, making it difficult to understand what Gibson is trying to tell us.

There's a lot of unnecessary action as well, it just doesn't fit the characters. Those people should be thinking their way out of a bind.

I should say I never got past book one of his Shoal sequence or whatever. Sequence. Hmm. It was irritatingly imitative.

Final Days is one of my favorite Gary Gibson novels.

Essentially a hard sci-fi apocalypse novel. That's the shell wrapped around the story.
There's a time travel/paradox plot, an entirely different political plot, characters that weave back and forth between those plots.

The character development, dialogue, and action are intense but well paced.

Gibson is a master at writing believable characters into strange stories and worlds.

It's a good fricken book. READ IT.