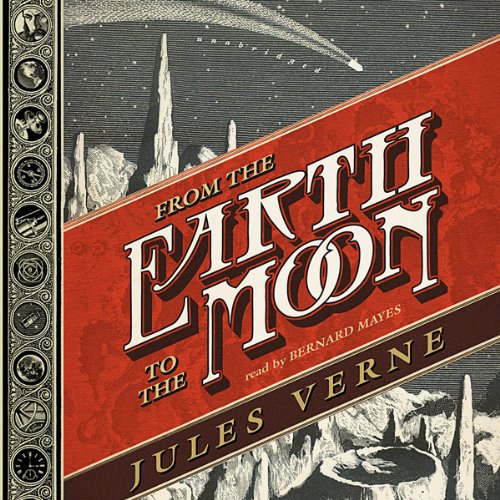 The War of the Rebellion is over, and the members of the American Gun Club, bored with inactivity, look around for a new project. At last they have it: "We will build the greatest projectile the world has ever seen and make the moon our 38th state!"

When From the Earth to the Moon was published in 1865, it was regarded as pure fantasy. Who could imagine a rocket that would carry men and animals through space? Today, like so many of Jules Verne's prophecies, space travel is a reality. Here's a fun adventure story that shows how Verne, with foresight that is at times almost eerily accurate, envisioned a trip to the moon.

How Science Fiction Keeps Us Connected to Our Curiosity

You love Science Fiction and all of the wonderfully imaginative landscapes it conjures in your mind's eye. You can't wait for the big budget remakes of both Frank Herber's Dune and H.G. Wells' The Invisible Man hitting theatres later this year, but in the meantime, why not explore the genre's best with this list of incredible titles. Featuring The Testaments by Margaret Atwood, the titles mentioned above, and several other great listens, our list will remind you about that incredible feeling of curiosity, aspiration, and wonder you get every time you tune in. Find out how science fiction keeps us connected to our curiosity on our blog, Audible Explore.

What listeners say about From the Earth to the Moon

there is a whole missing part before the end of the novel following the discharge of the columbiade there is a scene in the shell that is not included.

The story isn't bad, but definitely not one of Verne's best. Basically the NRA wants to build a gun big enough to shoot the moon and at the last minute a Frenchman wants to hitch a ride on the bullet. I might have appreciated the story more if it weren't for the narrator. He does very few voices to distinguish the characters and they're all high-pitched and nasally. It's distracting and a little obnoxious. 3 stars for the story but only 1 star for the narrator. I would suggest finding a different version of this audiobook.

While the writing is fantastic, the story really leaves the leader disappointed. A lot of build up for a very brief and unfulfilling ending.

For those who wish to research science fiction

I've gave this book a bad rate, but that's only due to the fact I didn't enjoy it that much. That however, does not mean i cannot appreciate it. The book can serve in today's point of view as some sort of a tool to show us what the past saw as fantasy, and also how it developed today's fantasy's standards.
Not a must read, but will compliment the right person.

This book has so many calculations in it it’s hard to follow by just listening to it. It would be good for architects and engineers and people who like math in general. The narrator’s voice is flat and monotonous so I fell asleep three times while listening to this.

Wowie, is this boring. And I like complicated things, science, math, diplomacy, etc. And this was the most boring take of all time.

Longer than needed and boring.

I bought this book after my wife recommended it. After listening to most of the book and never getting to that part "where it gets better" I was very dissapointed. After explaining the plot and story to my wife she then said that she might have listened to a child's abridged version of the book. This book is repetitive, the reader sounds like a tired old grandfather. Do not recommend.

The very insightful Verne’s speculation based on the knowledge available then, which much of it turned inaccurate today, makes me wonder how insightful -yet wrong- our current knowledge body.. A question to scientists today: is it difficult to state that “what we take for granted today” is a mere argument from Ignorance?

Should be called Grumpy Old Men

I’ve heard wonderful musings about Jules Verne books my whole life. I absolutely loved 20,000 Leagues. This book however failed to deliver. The entire book is a constant build up towards the titular event, but amounts to no more than old men arguing with each other.
Aside from the story itself, the narrator is awful. Loud and bombastic, yet somehow still boring. Half of his accents amount to no more than a half hearted knocked off of Apu from the Simpsons.

I’m sure the story is delightful but this reader’s slightly nasal voice is awful. Definitely cannot listen to his voice for the length of the book. I didn’t even make it a full minute. 😢

Turned off by the voice

I stopped playing the book within 30 seconds. The voice annoyed me and I couldn’t stand it.