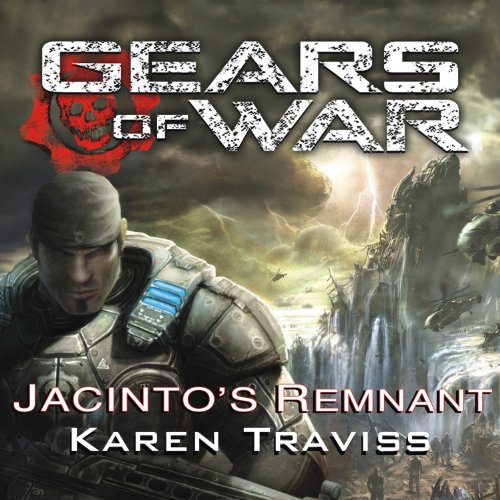 Based on the blockbuster Xbox game, this is the stunning story of the men and women who stood between a planet and total destruction - and now have to face the consequences of their actions.

After a brutal 15-year war for survival, the Coalition of Ordered Governments is forced to destroy mankind's last city in a final bid to stop the Locust Horde. As the survivors flee Jacinto, they must contend with the last of the Locust, bent on vengeance, as they struggle to stay alive in an icy wilderness.

Marcus Fenix, Dom Santiago, and their fellow Gears fight to get Jacinto's refugees to a safe haven, but find themselves in a lawless new world where the enemy is human---and as desperate and dangerous as any grub.

What listeners say about Gears of War: Jacinto's Remnant

Terrific Sequel
Karen Traviss follows up her first book, Gears of War: Aspho Fields, with another great book. Traviss takes you through events that follow after the events of the video game Gears of War 2. Again, taking you into the past of the characters and how those events shaped their present day.

Colacci again does a great job narrating the book, bringing out the depth and emotion of the characters.

If you can get last the dull narration, you're in for a good Gears plot.

it was alright I enjoyed it hearing about the hammer of dawn strikes was awesome to hear about. but nothing really stood out to me like in Aspho but still a decent read

great addition to the games

this book covers the aftermath of GoW 2 and how the surviving population continued to survive!
great backstory once again that expands the GoW universe

takes a second to realize it picks up after a game but after you take that on it's a great listen!

a deeper view into a amazing series

Another great book in the series! The more books I hear from this series the more I enjoy it as a whole. I recommend the series for fans of the game as well as readers who enjoy these gritty apocalyptic worlds

Always pronouncing Jacinto wrong, in multiple books even. Can’t be that hard to do a little research before reading a book.

If you enjoy the gear games or even just good old fashioned action then you'll enjoy this audio book.