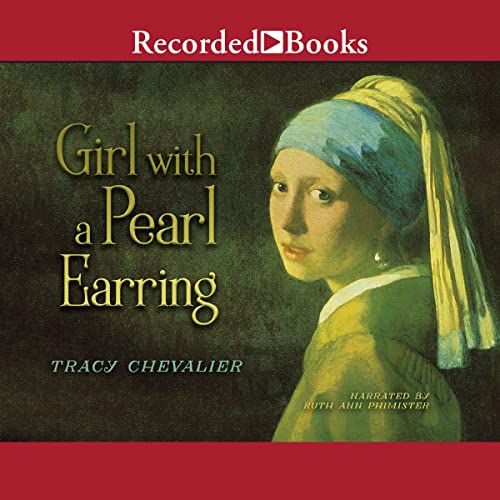 Girl with a Pearl Earring

After earning a graduate degree in creative writing from the University of East Anglia, Tracy Chevalier was immediately recognized for her literary talent. In Girl with a Pearl Earring, she recreates the 17th-century world of Johannes Vermeer. This haunting work of historical fiction received rave reviews in publications as diverse as The New Yorker, The Wall Street Journal, and The Christian Science Monitor.

In 1664, 16-year-old Griet enters the Vermeer household as a servant. Daughter of a Delft tile maker, she has a natural eye for color and design. Daily, she cleans the studio, learning much about how Vermeer sees the people he paints. As his attention focuses on her, she slowly becomes one of his subjects. Tracy Chevalier fills this unusual love story with the shades, sounds, and textures of everyday life in Holland. Narrator Ruth Ann Phimister perfectly voices Griet's growing awareness of the intrigues surrounding her and the need to define the value of her life.

"Outstanding." (USA Today)
"This is a completely absorbing story with enough historical authenticity and artistic intuition to mark Chevalier as a talented newcomer to the literary scene." (Publishers Weekly)
"Chevalier's exploration into the soul of this complex but nave young woman is moving, and her depiction of 17th-century Delft is marvelously evocative." (The New York Times)

What listeners say about Girl with a Pearl Earring

It Could Have Been So Much Better

I struggled to finish this book. I didn't care for the narrator as she sounded so pious.
There could have been so much more added to the story as it already was a fictional account. Oh well.

didn't want it to end

the narrator was perfect. she, along with the author, made you want to keep going, to know more about the girl (and art!)

Loved the "voice" of the book. This is a great read and a great listen. A real pleasure to hear. Highly recommend this one. If you saw the movie, you will get even more out of the book.

This is a beautiful story created for a beautiful painting: wonderfully drawn characters, beautifully detailed descriptions, and a captivating story.

This one is hard to put my finger on why I enjoyed it so much. It drew me in much like the painting. The author's choice of symbolism was quiet and intriguing. The book to me was a coming of age story I liked what one editor said, "when Griet was forced by Vermeer to pierce her ears, there is a symbolic deflowering of the young girl. She is forced to sacrifice her position in the household for art. And Griet is well aware of her sacrifice, ``he used what he wanted for his paintings, without considering the result''. And, ``I should have begged him not to ruin me".
Griet connected with Vermeer at the place where his heart was and her heart was too. Vermeer's wife couldn't get there and neither could the butcher boy Peter. There was more sensual excitement in the painting of the earring than the backstreet encounter with the boyfriend.
I will be thinking of this book for a while and enjoying the "small strokes of light" that will come as I decipher the different angles to look at it

Poorly researched novel is a howl

I listened to this book during the first week of a month long trip to the Netherlands. My interest in this country began with a first visit in 1983 when I visited the Rijksmuseum and saw my first Vermeer painting, and also visited the Anne Frank House, and read her diary. During this second visit, I planned to learn much more about Dutch art, history and culture. In preparation for my trip, I read two very good books on the art of the Dutch golden age and several others including two on the life and art of Rembrandt and one about Van Gogh. I also listened to the marvelous author narrated book by Russell Shorto, "Amsterdam: A History of the World's Most Liberal City." Finally, I read three mystery novels by Janwillem van de Wetering and one absolutely stunning novel, "The Assault", by one of the Netherlands most beloved authors, Harry Mulisch.

I thought that the "Girl with a Pearl Earring" would make for light listening on the flight over and also as a pleasant book to listen to while strolling along the canals of Amsterdam. I was wrong. The idea of telling the tale of the creation of this masterpiece from the point of view of the subject is very intriguing. Since we do not know who the subject is or whether this was an actual portrait done for a paying client or a so-called "tronie", a painting possibly done from a real model but created for sale on the open market, the author has a relatively free hand to let her imagination drive the narrative. However, even in this imaginary space, an author must at least be careful not to write a tale so wildly at odds with what we know about this particular artist and this particular time in Dutch history.

Tracy Chevalier would have us believe that having a portrait painted was some kind of disgrace in the 17th century Netherlands. In fact the opposite is the case. Most families who could afford to have portraits painted, did so and hung them proudly in their homes. And not only families. Dutch guilds and organizations of every kind, from university professors to doctors performing dissections to the city militias engaged in fighting Spain for their independence had their group portraits painted. The Dutch of this time were wild for art and even the most humble homes had paintings on the walls.

The author would also have us believe that a head covering was required of a proper Dutch woman. Again, this is a laughable conceit. Many of Vermeer's other portraits show woman with beautifully coifed heads, often displaying jewels or other decorations in their hair. And not only Vermeer! Rembrandt, Gerard ter Borch, Gerrit Dou, Bartholomeus van der Helst, and on and on. The list is endless. And the "Girl with a Pearl Earring" is wearing a Turkish style Turban, common in many "tronie" paintings of the day since it allowed the artist an opportunity to show off an ability to paint fabric folds and also to use bright shades of color.
Again, the author claims that this elaborate headdress was accidentally arrived at when another head covering came apart. Vermeer, who paid such careful attention to detail that his paintings often took two or more years to create, is unlikely to leave such an important detail to last minute happenstance.

The idea that women in the Netherlands were subservient, timid creatures is also absurd. In this period, after marriage, a woman kept her own name, not taking that of her husband. And servants in wealthier Netherlands households were treated as members of the family, taking meals with each other, and sharing in the household chores since the running of a household was truly labor intensive in that time.

Finally, I found most disturbing and objectionable the implied sadomasochistic relationship between Vermeer and his young subject. Surely, there is nothing in this portrait or in any of Vermeer's work on which to base such a conjecture. It is the mysterious and not completely readable expression on the subject's face which adds drama and fascination to this masterpiece. Longing and wistfulness, perhaps, but pain and suffering no. The idea that artist and subject may be in love is not offensive and may even be a part of capturing a moment in time with such poignancy. Many artist-model liaisons are well known. But the idea that Vermeer demanded that his subject drive a gold wire through her ear lobe as she is about to pose for a portrait as part of her household duties is offensive and lacks even the remotest shred of credibility. While such distasteful fabrications may drive up book sales, ultimately they debase the work and turn the author into a panderer.

Delightful tale based on a great piece of art

Would you listen to Girl with a Pearl Earring again? Why?

This was an excellent read (and listen); the movie was also great. It is a short book, full of color and passion (like a good painting). Even though the broad strokes are based on fact ( the painter's family and the world in which he painted and did business are probably accurate), this is a novel...but while reading it, it is easy to believe that things happened as recounted by the author

This was a very "visual" book; everything is described in vibrant detail; I have more than one favorite scene.

This was a great listen

If you could sum up Girl with a Pearl Earring in three words, what would they be?

What other book might you compare Girl with a Pearl Earring to and why?

The Garden Party and Other Stories by Katherine Mansfield. The feminine pov and great descriptive writing of fine details that are not boring. Writing of simple, everyday activities come to life and draw you in.

Have you listened to any of Ruth Ann Phimister’s other performances before? How does this one compare?

No, but I look forward to listening to her again if it's a book that interests me. She was perfect for this character Griet, 17th century Holland and the story.

I found it to be a relaxing audio book, yet never boring. I listened to it over the course of one day.

The book is a bit different from the film and is a wonderful adaptation. If you enjoyed the film, I'm sure you won't regret investing your time or money on the paperback or this audiobook.

This book is written from the perspective of a 17 year old and yet the narrator sounds like she's 90. Terrible narration, however, the story line itself is decently entertaining.

I liked this book much more than I was expecting. The story was very well developed and all the pieces were brought together in the end. The readers voice was wonderful as the voice of the young woman and I really felt like I got in her head through her thoughts.

Chevalier's writing is simple and uninvolving. Had I quit in the middle of this book, I would never have wondered how it ended.
I kept going to see if the 4-star rating would be justified, but I feel it wasn't. Little details didn't fit the era; the dialogue was boring and moved at a snail's pace; the idea that a well-received (even in his own time) painter would seek the advice of a maid as to color and composition is absurd. It's just silly, and not even a diverting pastime.