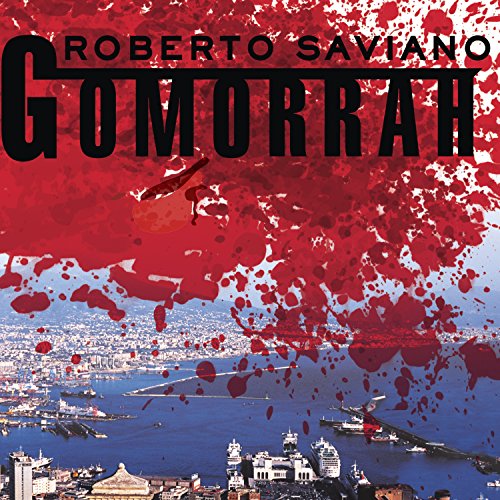 A groundbreaking major best seller in Italy, Gomorrah is Roberto Saviano's gripping nonfiction account of the decline of Naples under the rule of the Camorra, an organized crime network with a large international reach and stakes in construction, high fashion, illicit drugs, and toxic-waste disposal.

Known by insiders as "the System," the Camorra affects cities and villages along the Neapolitan coast and is the deciding factor in why Campania, for instance, has the highest murder rate in all of Europe and why cancer levels there have skyrocketed in recent years.

Saviano tells of huge cargoes of Chinese goods that are shipped to Naples and then quickly distributed unchecked across Europe. He investigates the Camorra's control of thousands of Chinese factories contracted to manufacture fashion goods, legally and illegally, for distribution around the world, and relates the chilling details of how the abusive handling of toxic waste is causing devastating pollution not only for Naples but also China and Somalia.

In pursuit of his subject, Saviano worked as an assistant at a Chinese textile manufacturer, as a waiter at a Camorra wedding, and on a construction site. A native of the region, he recalls seeing his first murder at the age of 14 and how his own father, a doctor, suffered a brutal beating for trying to aid an 18-year-old victim who had been left for dead in the street.

Gomorrah is a bold and important work of investigative writing that holds global significance, one heroic young man's impassioned story of a place under the rule of a murderous organization.

Well, I knew nothing about the Mob in Italy until I lisened to this book. This is a great book translated from Italian. It gives a clear insight into how organized crime is influencing many aspects of life across the world. It is read well and will keep anyone even marginally interested in the topic listening. IT is disturbing, exciting, informative, and raw. The reader had my earlobes in his hands for hours.

Six seasons of The Sopranos, plus three Godfather movies and a bunch of organized crime books have pretty much formed my views of the mafia. Organized crime as entertainment. Gomorrah tells what happens when organized crime infiltrates every aspect of the economy and social life, as it has done in Southern Italy. Saviano, a native son of Naples, provides an insider personal account of the social and human costs of living in a mafia dominated culture. The incredible levels of violence and corruption spawned by mafia control are shocking and eye opening, even more so given this story is playing out in the heart of Western Europe.

Not a hopeful book, not an entertaining book, but a fascinating exposition of a world both unknown and hidden to outsiders. An excellent companion to McMafia, filling in the details to Glenny's broad outlines. This book was apparently a sensation when published in Italy, although the author has had to go into hiding because of death threats. Are there places in the U.S. where organized crime continues exert significant control in aspects of the economy?

Best of Saviano's work. That is all I have to say. Why does this review have to ne 15 words?

This was a horrible audiobook. There is no real story just a list of names that the author recounts. I tortured myself to finish this only because I did not want to waste my money.

i am sure you can read more about the book itself somewhere else. it is chilling and brutal, but very engaging. sort of reminds me of 'the wire' in it's verite style. the narrator does an excellent job of staying out of the way and letting the story tell itself. his voice is clear and easy to listen to.

I know this was a bestselling book and a movie, and the author's life is in danger because he wrote this book. But still, every paragraph seems to consist of one sentence, and then the same sentence rewritten in different ways four or five times. Where is the editor? I couldn't finish this book, it was just too grueling for me. I think I'll try renting the movie to see if I can enjoy the story when it's written a bit more tightly.

Image-rich, from real life, really puts you there

This is the most vivid description I've heard, of the off-the-books global economy, and the lives of people caught up in its more brutal, low-income predicaments (at least, by the standards of the fringes of Europe).

I loved this book, it was easy to read and it not have a hard time following the book at all. i just wish they would have written it more about various Modern Sicilian Families.

Saviano is an astute investigator!

I found this book to be gripping from chapter 1.
Detailed analysis built upon gathered evidence & public documents that bring light to SO MUCH!

I couldn't finish it. The story was interesting, but the narrator sounded like he was struggling to stay awake. I know I was.