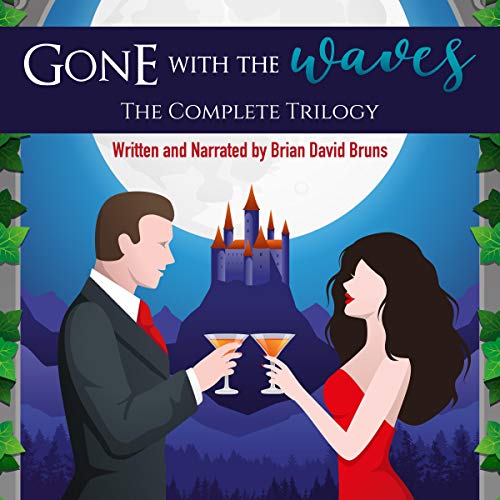 The complete trilogy in one volume!

From Romania with Love

He found his one-and-only on land. But now that they’re at sea, will passion stay full steam ahead?

Brian never thought a single conversation could steal his heart and expand his world. But when he strikes an instant connection with a Romanian beauty, he gets swept up in a hilarious, carefree, romantic escape to her native Transylvania. So, when she must leave to work on a cruise ship, he impulsively dons his sailing cap and follows her aboard.

Though he was unprepared for the grueling onboard training of new hires, his determination to be with her surpasses his awkward American moments. But as the reality of long days and seasick nights sets in, dark secrets surface that threaten to pull their courtship under.

Will Brian need a life jacket to keep his relationship afloat?

From Romania with Love is the first book in the delightful Gone with the Waves romantic comedy series, entirely of true events in the author’s life. If you enjoy travelogue-like settings, witty banter, and reckless hearts, then you’ll adore Brian David Bruns’ continent-spanning adventure. Buy From Romania with Love to weather the storms of desire today!

He chose her over the company. He’s about to find out the real cost of romance…

Brian’s love for Romina may be strong, but he’s sailing into troubled waters. And he’s even prepared to endure torturous months apart working like a dog on another ship, if it means he can get them back together. Though, he’s unprepared for the sadistic challenges his cruel new boss implements to break him body and soul.

Enduring extreme anti-Americanism, food deprivation, and 100-hour-long work weeks, Brian’s only beacon of hope is the messages sent from his soulmate. With her emails to sustain him, he vows to stay the course and outsmart the higher-ups of the cruise-line giant.

Can Brian survive the stormy conflict threatening to drown his hopes of reuniting with Romina?

Wet Orpheus is the second book in the wild Gone with the Waves romantic comedy series, entirely of true events in the author’s life. If you like insider accounts of work below deck, heart-aching emotion, and passionate love stories, then you’ll adore Brian David Bruns’ tale of overcoming impossible odds. Buy Wet Orpheus to hoist the standard for valor today!

He’s emerged as a swanky, tuxedo-wearing, cruise ship rock star. But will it be enough to win his girlfriend’s heart?

Brian would walk the plank if it plucked Romina from her awful bottom-of-the-boat job. But knowing that their only way out of the hellish working conditions is to beat ships at their own game, he bids her adieu to learn the competitive trade of art auctioneering. And though he takes his fair share of hard knocks, he’s finally hitting the big time.

Becoming a master auctioneer, he lives like a cigar-smoking king aboard elite luxury liners with access to anything he wants. But when he returns victorious to whisk his love away to better things, Romina mysteriously refuses. And he worries that in chasing his ambitions, regardless of good intentions, he may have lost her forever.

Can Brian persuade Romina that the world is their oyster, or will she push his grand vision overboard?

What listeners say about Gone with the Waves