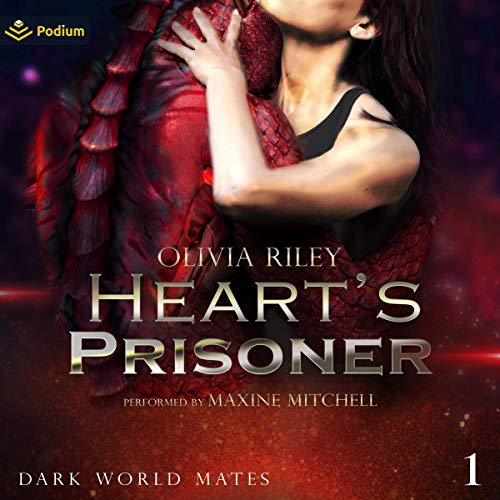 Written by: Olivia Riley
Narrated by: Maxine Mitchell
Try for $0.00

Asset X: Massive, deadly, and a little terrifying to say the least. A devilish warrior, and a killer. Captured on a hellish world after attacking a military campsite and now imprisoned in a state-of-the-art cell inside one of the military’s top bases, Lazris. Lana has been assigned to "study" him; to learn his secrets and gain his trust, if he is ever allowed to set foot out of his cell. As a top behaviorist, it is the biggest hurdle of her career.

Asset X - or Xerus as he is called - won't give up his secrets easily. He is difficult, elusive, and dare she say, unfathomably alluring...despite his seething demeanor and hard, frightening physique. Something subconsciously draws her to him. Something wildly irresistible. Even if his wicked smile and needful gaze could just be a ploy to win her trust and escape his cell. She shouldn't think of him like that. He is an alien after all. And possibly their enemy.

Xerus claims he is on a mission. A mission to destroy. And he cannot afford to fail. If he dares let Lana get close, dares open his cold heart to her, she could compromise everything.

This book contains heated intimate scenes and some violence. It is intended for mature listeners.

What listeners say about Heart's Prisoner

I was overall quite disappointed in this audiobook. The protagonist was shallow and weak (of character and physical strength) while being praised for being at the top of her field and brave. I just can't see it. She whined and had pathetic hysterics right from the get-go and her "scientific method" was laughable. There was zero actual chemistry between her and the alien and their relationship just felt shallow and without substance. Stupid "fairy tale" ending to boot. Seriously, I've read far better in this genre and wouldn't recommend wasting your time with this one. It was dull, annoying, and I was waiting the whole time for it to get interesting (how it has good ratings on Goodreads, I really can't understand). If you want well-written stories with more "out there" aliens, I highly recommend Amanda Milo instead.

This is one of the books that I could not put down because I just absolutely had to find out what was going on. Nothing was straightforward and plenty of hints that there was some mystery. There was more focus on the mystery than the romance, but the romance was very important. There were plenty of bad guys that I loved to hate, especially when they belittled and sexually harassed Lana. I love it when a narrator performs the reading in such a way that I forget that he or she is reading a book. Ms. Mitchell’s talent was superb.

Absolutely great story! Especially if you're a fan of a slow burn! The characters were strong and the voice acting was fantastic.

With a PLOT.
Fairly cliched story if even I can figure out the mysterious enemy almost immediately, but a well-written story nonetheless. I thought the pacing was good, people didn't act like complete idiots (mostly) or do 180's on their own personalities, and folks responded appropriately to situations. So it avoided a lot of the pitfalls of the usual cringe-worthy alien romance genre. The level of hostile sexism the mc encounters is over-the-top and unbelievable, though.
World-building was believable and sufficiently thorough.

Don't expect award-winning genre fiction, But it's pretty great within it's assigned lane.

this book was fantastic. A slow burn romance. the narrator's voice was amazing! A must read!

If you are a teenager you will probably love this.

Unfortunately, this was quite a drudge. Lana Heart is clueless and her assignment seems to change from chapter to chapter just like her area of expertise. She is led around by every man in the book, (I hope feminism makes more progress than this in the future) and this book only passes the Bechdel Test by a hair. There’s one other woman, Nicole, mentioned in the book and she is the resident counselor (it’s very strange that Lana would automatically be assigned a counselor, is every woman in this book a cry baby that needs to be told what to do and someone to listen to her ‘problems’). Nicole is also her friend (as she is the only other woman on the station and apparently men and women can’t be friends, it’s a bit of boy against girls so Nicole and Lana only have each other) and listens to her “revelation” I kid you not, that despite keeping these aliens in cages, calling them ‘assets and having all these safety protocols the military is really only interested in keeping the aliens like animals. I laughed out loud. No kidding? Also, another annoying fact was that Nichole’s uncle runs Lazurus so it’s assumed she got the job only because he is her uncle not because she is qualified.

The rest of the characters were men, including the Alpha alien, telling the lead female character what to do all the time and Lana did what they all said without any agency of her own all the time (and at the same time acting in a very unprofessional and submissive manner). The author was trying to show a strong woman but instead displayed a story of a woman negotiating by compromising herself through an extremely misogynist world and being content with that. Constantly men were telling her what to do and she was doing it (but at the same time making herself out to be the victim). I laughed when she was making the alien dinner (play house much?) I mean there was so much childish behavior between adults in this book. Some of it even gave off puritanical Victorian historical vibes-the MC giving the alien a lock of hair and bracelet, something that would only have significance in Western culture on Earth (an anthropologist, linguist, behaviorist, would know this). Also culture changes, human culture would have also changed with it. Just like we don't give portraits or locks of hair to each other anymore.

The world-building was pretty much a mixture of the Alien movies and Silence of the Lambs and I mean verbatim. There is nothing wrong with stealing but make sure it makes sense for your world (all I can think is that these other reviewers have never seen Alien). Overall, none of it really made sense in the world. Including the point of Lana's job. I am not a dumb person but there was absolutely no point in what she was asked to do or the way in which she conducted her job. Obviously, the author did not know either because the goalposts kept shifting.

The crux of the issue, a real feminist, who values herself, who values her status in society, and who values her career would never fall in love with an alpha male. As an educated woman I had a lot of issues with this book, so much so I could barely listen to it, but I finished it just to see how silly it would become, and trust me, it became very silly. If you’re a teenager and know nothing about the world, occupations, languages, different cultures, etc. you might find this entertaining, (that’s where I think the good reviews are coming from, teenagers). If you’re an educated woman who has ever had a job that required an education, give this one a hard pass.

This is the first book in Dark World Mates series and it is spectacular!! It's like a mix of Resident Evil and Doom all into one nail biting book. There's deceit and suspense as well as some steam. This is also the first book by Olivia Riley that I have listened to and there will definitely be more.

kind of long...but a descent love story.. some twists. the ending was a shocker but nice

I really liked the story and listened nonstop to finish. There were some thing's that confused me in the story, little plot holes. But I really wanted more of the story, I felt it ended too abruptly

I am a Booktuber and I stumbled on the gem. Great narrative, great story plot and a decent length. The sex scenes are not extensive, but I’m ok with that.

the story moved slow at first. ( stay the course) you wont regret it .. strong characters. subplot takes over some time but the world building is important.. LOVED. the story. will enjoy the next and the next hopefully