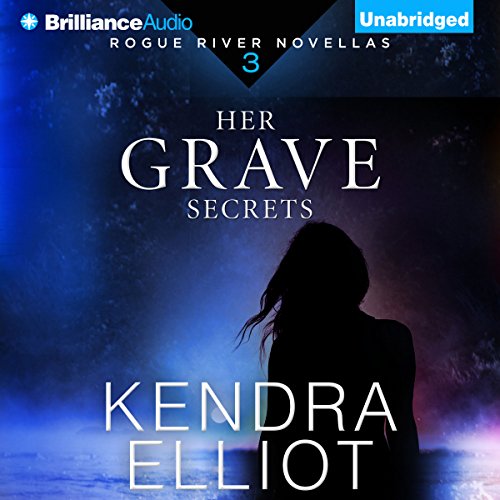 There are no secrets in a small town - until someone has one worth dying for.

Local cop Stevie Taylor and police chief Zane Duncan have startling new proof that a deadly street drug is expanding its poisonous grip on their small town: A skull found on the banks of the Rogue River has two bullet holes in the back. Still caught up in the excitement of their new relationship, Stevie and Zane are determined to track down the drug’s source before more lives in Solitude, Oregon, are lost.

Then one death strikes especially close to home, leading to heartache and confusion for Stevie. As the drug distributers strike hard and the body count in Solitude grows higher, she and Zane must hunt down the deadly killer - but are they the predators, or the prey?

Filled with unexpected twists, Her Grave Secrets is the third exciting Rogue River novella in the romantic suspense series from Kendra Elliot and Melinda Leigh.

What listeners say about Her Grave Secrets

...romantic suspense thriller where the romantic aspect is incidental to the great suspense story. Kendra Elliot and Melinda Leigh, both of whom set their books in eastern Oregon, are masters of this genre.

Catching a killer in Solitude

The missing ex-police Chief is found...dead...and all signs point to something fishy. Can Stevie and Zane get to the bottom of this mystery?

I really enjoy Kendra Elliot's writing. Her stories develop characters that make you feel as if you know them yourself. Very suspenseful, yet down to earth. Makes you think about your home town, in some aspects. The performance by this reader is always excellent.

For someone who usually avoids novellas, I've sure had a good time with this series. No doubt that's because the things that usually bug me about novellas aren't at issue here. The characters are still nicely developed, and the story line is detailed and well-paced with plenty of the things I like: action, suspense, plot twists, and a touch of romance.

Both of these authors are favorites of mine, so the combo is pure delight. Zane and Stevie are a fascinating couple with plenty of issues but tons of heart. This series is a total winner for me.

Well this series is moving very well but the discovery of a skeleton in woods also lead to the findings about the disappearances of the formal chief of police death. Including the secrets he was covering. As Stevie and Zane, the new chief of police continue to hunt down those behind the town's drug problems the bodies start to pile up. Someone is killing off anyone who knows anything and Stevie and Zane find themselves hitting one dead end after another.

Excellent story, great plot, a mix of action and romance. Love the characters and the narrator's voice. I definitely recommend it.

So very thrilling. Love these characters. Great story with wonderful narration. I definitely recommend this book.

This is the third novella and the best entry of this four book series, which are written by authors Kendra Elliot and Melinda Leigh. The story arc is drawn out over four short novellas, but crime fiction fans will be able to suss out the murderers and other villains by the end of this book.

So far, I’ve enjoyed this series’ Kendra Elliot’s entries, which emphasize the murders, drug smuggling, and other associated crimes. I was it enamored with Melinda Leigh’s more romance-oriented storylines, and yes, I’ve finished her book #4.

Here’s a well-deserved shoutout to audiobook narrator, Kate Rudd. Her brilliant voice-acting brought the book to life. I will be listening to this again, which elevated the rating to 5 stars for me. Brava, Kate Rudd!

This series is getting really good and now Stevie and Zane have settled into a sort of relationship and when the results come back showing Stevie's dad had the drug in his system his death is being categorized as suspicious. Also, the skull found with bullet holes is the missing deputy and when they go to his home they find all sorts of expensive "toys" and it was well known he was beyond broke. So many questions and none of them good. Who is behind all of this? Just when they think they are figuring it out, Zane is attacked by the one they least suspect. Will Stevie be on time to save him?

Excellent for a quick listen while you work

Makes my work go faster and more enjoyable. I look forward to listening. The author holds my attention. Rhe narrator is great.