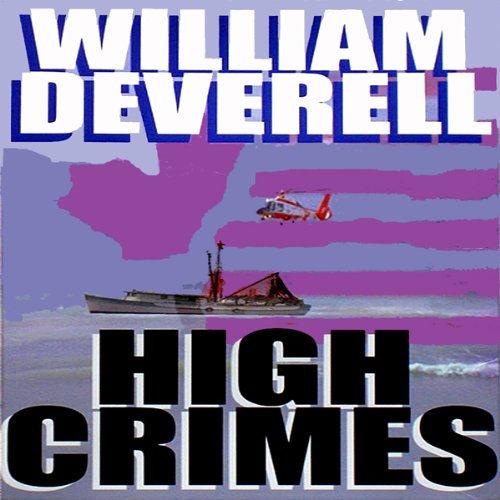 From Colombia to a hidden cove in Newfoundland, modern day Robin Hood Peter Kerrivan and his ship of merry men are tracked by a NASA satellite, set up by the cop who couldn't bring him to ground, RCMP Inspector Harold Mitchell. But has Mitchell gone too far? He's hired unscrupulous ex-CIA Rudy Meyers... who needs big bucks to fund his Cuban reinvasion force. Senator Publio Victor Paez has put all his chips on Kerrivan and Meyers, handing them the single biggest treasure ever to leave the shores of South America: $300,000,000 worth of Colombian sensemilla. Betrayal, murder and chaos stalk 'Captain Jackpot' and Johnny Nighthawk from Montreal to Cartagena, with a stop-off in Miami, but when they slip through the Coast Guard net, officials in high places must scramble to cover up. Even Kerrivan's own Toronto lawyer, James Peddigrew, is willing to sell his client down-river for a price: the release of cocaine-smuggling stewardess Marianne Larochelle.

The high crimes reach right to the top with Canadian cabinet minister Jean Luis Lesard sweating to cover up at any cost: Mitchell's man Meyers, with U.S. State Department immunity, may have dealt the drugs and murdered Kevin Kelly and a Cuban-collaborator while in the employ of Her Majesty, the Queen. Good cops RCMP Sergeant Theo O'Doul and DEA Special Agent Jessica Flaherty are the only two in the mix with a hope of solving this tangle of High Crimes and bringing Kelly's murderer to justice.

"Every detail meshes like clockwork. Deverell is a great storyteller. Needles was a brilliantly original venture... High Crimes is more exciting." ( The Globe and Mail)
"Roars along like a jet. Deverell can hold his own with anyone in the thriller business today." ( Toronto Star)
"Move over Arthur Hailey and Robert Ludlum..." (Regina Leader Post)

What listeners say about High Crimes

Sensemila on the high seas

Where does High Crimes rank among all the audiobooks you’ve listened to so far?

It ranks close to the top of my reading list. This is my first reading on so much drugs, betrayals and cover-up. Very interesting and suspenseful.

What was one of the most memorable moments of High Crimes?

There were several - I especially live Pete Kerrivan who was willing to sacrifice himself for his men.

Have you listened to any of Steve Scherf and Maggie Scherf ’s other performances before? How does this one compare?

No this is my first and it was very good. I loved the narration and the distinction of characters, makes for a better listening

I loved how the crew on the tug all stuck together and supported each other. I also lovved how they rescued Kerrivan on the way to jail.

I loved the narration and the distinction of characters, makes for a better listening Was a little hesitant about reading but very glad that I did. This was a very good reader and also relevant to today’s drug invested society, full of corruption and deceptions. Marianne Laruchelle, what a character!

There are high stakes in this clever and fast-paced ‘crackpot’ crime caper. Three hundred million dollars worth of Colombian sensemilla – very potent marijuana derived from the female part of the plant – is on a boat sailing from Colombia to a little-used cove in Newfoundland, an operation organised by Peter Kerrivan, a self-styled latter-day Robin Hood. Unknown to Kerrivan, the vessel is being tracked by a US government satellite, under the authority of Royal Canadian Mounted Police investigator Harold Mitchell. And, as everyone knows, the Mounties always get their man.

It’s not quite that simple, of course. Mitchell has asked for help from a rabid anti-Communist ex-CIA thug Rudy Meyers who is putting together a Cuban reinvasion force. He has traded drugs himself and is responsible for various deaths, including that of Kevin Kelly – a crime currently under investigation by Royal Canadian Mounted Police Sergeant Theo O’Doul and DEA Special Agent Jessica Flaherty. The Canadian government is not happy that the plot was hatched in the first place. And Kerrivan’s Canadian lawyer, James Peddigrew, is concerned first and foremost with coke-snorting stewardess Marianne Larochelle.

What ensues is a sensational and complex wise-cracking drama, hilarious at times, and superbly brought to life by the very talented Steve Scherf and Maggie Scherf. The repartee is exceptional, the twists and turns bewildering. You will want and need to listen to High Crimes more than once, but this is a tour de force presentation – exactly the kind of production that is winning audiences in all parts of the globe and makes the audiobook one of the most exciting mediums of the present time.

This one will hook you!

As a fan of William Deverell novels, I was looking forward to listening to his best seller on my upcoming road trip. It wasn’t long into the trip before I was hooked by this lively tale of a high-seas drug smuggling operation with its cast of colorful characters and twisting plot lines. But it wasn’t just Deverell’s magic that had me hooked. While I had expected to hear the typical interesting but mainly monotone voice of a narrator, out jumped the voices of what you would swear were real life people: Peter the Newfoundland rogue and captain of the rusting freighter, a double-crossing sleazy Toronto lawyer, Rudy the DEA agent and ex-CIA killer, a cannabis growing Colombian senator, a sexy French Canadian seductress and Johnny Nighthawk - the American native who gives us the inside story of what the smugglers are facing on the freighter. Incredible that all the unique voices in this book come from just Steve and Maggie Scherf. I’m usually good for only an hour or two while behind the wheel, but I couldn’t stop listening to these animated characters and the treacherous murder mystery into which they had fallen.

A great tale of suspence on the High Seas

This is a review of the audio version of High Crimes by William Deverell Narrated by Steve Scherf, Maggie Scherf.

I picked up this audiobook on the strength of Needles (Deverell's first book, also narrated by Steve Scherf), which I listened to a few weeks back. That was an interesting book, good enough for me to go and get the other two available on audio.

High Crimes is a great story, particularly when read by Steve and Maggie Scherf. I listen to a lot of audio books and I didn't realize how bland some of them are, most being read with only light inflections (if any at all) to distinguish between the characters. If you enjoy audio books, then pick this one up, simply as a demonstration of how books should be read. It's easy to distinguish the characters, the accents are incredibly well done, and the reading clear and a pleasure to follow.
High crimes is the story of Pete Kerrivan, an old school Newfoundland smuggler. The story starts with he and his crew being acquitted (on a technicality) of smuggling marijuana into Canada, thereby earning the distinction of being targeted by RCMP Inspector Harold Mitchell, who will stop at nothing to put Kerrivan behind bars. Kerrivan's problem is that, while he was freed, the boatload of marijuana was destroyed, and Kerrivan had bought it on consignment ... so now he owes a Colombian drug lord a boatload of money. So he hatches a scheme to smuggle in the biggest load of marijuana ever brought into Canada. Mitchell believes something is going to happen and plots his revenge, bringing the US Drug Enforcement Agency in to the plan. From Newfoundland to Colombia to Miami to Newfoundland, it's a question of who is leading whom, and on what merry chase.
The ending is completely unexpected and after you get your breath back, you realize how fitting it is.
Great book. Fantastic reading. 5 stars.

I did not like this book, but it may be OK for those who don't know what a French Canadian and First Nations accent sounds like.

What didn’t you like about Steve Scherf and Maggie Scherf ’s performance?

Accents did not sound right. Sounded to much like they were reading.

The plot was weak and the narration poor.