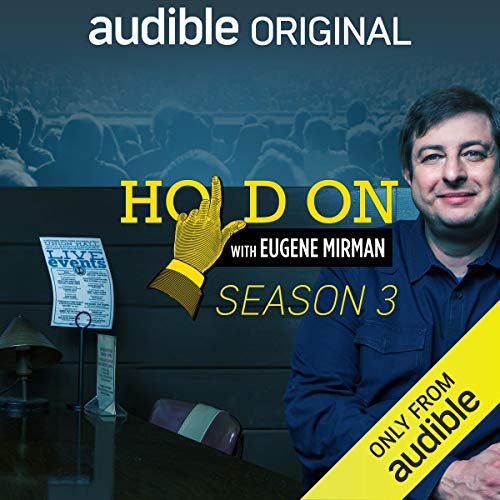 Hold On with Eugene Mirman, Season 3

[Contains explicit content] Storytelling aficionado and inquisitive host Eugene Mirman (Bob’s Burgers) sits down with special guests and hits “pause” to mine for funny details they might have left out of their true, entertaining, and personal stories. Hilarious tangents, amusing sidebars, and deep digressions abound in this peek at the stories behind the stories.

This season is full of great episodes featuring amazing stories by hilarious people. Hear Neil deGrasse Tyson’s story about considering a career in exotic dancing, Karen Kilgariff’s epic Bill Murray tale, Jonah Ray’s story about a record store on 9/11, Nick Thune’s horror story about an ultrasound, Julie Klausner’s story about a handsy Italian stranger, Michael Ian Black’s story about edibles in Amsterdam, Dana Gould’s story about planning a funeral for Vampira, and so many more! What do all of those episodes have in common? Funny people, fantastic stories, and the insightful conversation resulting from Eugene Mirman’s questions.

When you add Hold On with Eugene Mirman, Season 3 to your library you will receive all 22 episodes, each with a runtime of approximately 25 minutes.

What listeners say about Hold On with Eugene Mirman, Season 3

Not comedy, mostly a talk show with some comedy. I guess that’s why it’s free with my plan.

I would surely delete this if I could, but I am unable to do so, even with customer service intervention. Do NOT download this. It is horribly unfunny, and you can't get rid of it...like herpes, delivered in a podcast.

amazon/audible won't delete this from my library. it's torture just having it there. if I could give it negative stars, I happily would.