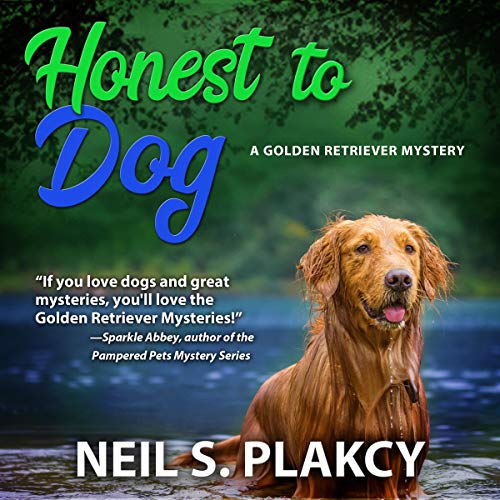 When his college friend Doug moves to Stewart's Crossing after an ugly divorce, reformed computer hacker Steve Levitan sees a way to pay forward the help he received under similar circumstances. But when Doug dies under mysterious circumstances, Steve and his crime-solving golden retriever Rochester have a new goal; find the truth behind Doug's death, even if Steve has to risk the freedom he has fought so hard for to do it. Contains Ponzi schemers, a Quaker funeral and cute jump drives shaped like llamas.

What listeners say about Honest to Dog

Sometimes a poor narrator spoils a good book.
I know narrating a book is a special skill set, but Kelly Libatique made it difficult for me to enjoy the seventh book of a series I've been enjoying through six previous print editions.
Labatique drones. He does not pronounce words correctly: probably the victim's name, Reading Terminal, "coiffed...telenovella...unkempt...interment...patrol...capri" are some of his gaffes. (Search the net and the standard pronunciations are instantly available.)

Rochester reminds me of the Sleuth of Scooby Doo

Would you listen to Honest to Dog again? Why?

Homest to Dog was enjoyable. I'm looking forward to catching up with the rest of the series.

What was one of the most memorable moments of Honest to Dog?

The three dogs in this book -all different breeds- had so much fun together!

Mr Libatique's voice had the correct tone for this mystery with a canine cast. Honest to Dog included characters with various accents.

I was first introduced to Mr Plakcy when I listened to his book with felines as a central character. It was well written.
His canine selection is broader and I gave it a chance. I'm so pleased I did!
With a male main character, a likable dead person, and in depth research (versus gossip), it's clearly not a "cozy mystery" but it's lighter than a regular adult mystery. I was able to listen to it while in my office, without worrying about being embarrassed or anxious if someone would hear something inappropriate. I think I had some guests linger a moment longer outside of my door, just for added entertainment in their day!
The characters-nearly all of them!- grew with the story. Relationships developed and matured, some withered, as IRL, we have to let go.
The introduction to a Quaker traditional funeral was unique. It added a very surprising touch, and I hope to be pleasantly schooled in other traditions as I delve deeper into the series.
I especially liked the underlying motivation and inner struggle of the MC. Most of us have our demons or addictions. It was good to see one that is not the tyical PI/alcohol (This is not one of those mysteries ) but to show how easy it is to succumb to temptations or fall into old habits.
Loved this book and would definitely recommend!

I love these stories especially the way Rochester always finds the important clues for Steve.