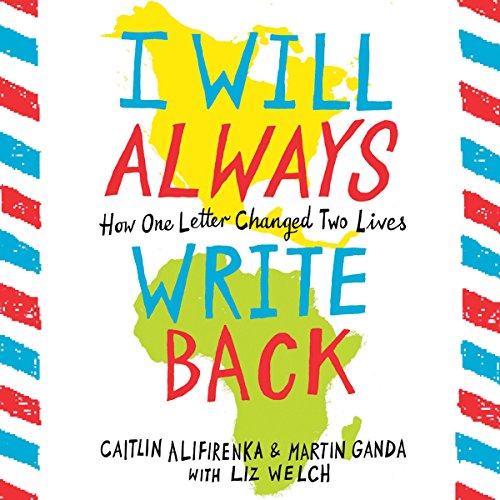 I Will Always Write Back

The true story of an all-American girl and a boy from an impoverished city in Zimbabwe and the letter that changed both of their lives forever.

It started as an assignment. Everyone in Caitlin's class wrote to an unknown student somewhere in a distant place. All the other kids picked countries like France or Germany, but when Caitlin saw Zimbabwe written on the board, it sounded like the most exotic place she had ever heard of - so she chose it.

Martin was lucky even to receive a pen-pal letter. There were only 10 letters and 40 kids in his class. But he was the top student, so he got the first one.

That letter was the beginning of a correspondence that spanned six years and changed two lives.

In this compelling dual memoir, Caitlin and Martin recount how they became best friends - and better people - through letters. Their story will inspire listeners to look beyond their own lives and wonder about the world at large and their place in it.

What listeners say about I Will Always Write Back

Great story! A tad over dramatic at times. But heart warming to know there are people who truly care about others in the world.

Got a pen pal?

I love writing letters and this story is a continuation of the wonderful feelings that happen when pen meets paper.

Caitlin and Martin are joined through the post and share their lives with each other. Caitlin slowly learns that what she has taken for granted is a tremendous excess in Martin's life. Her dollar sent as an example of US currency will buy a soda at the mall, for Martin it fed his family for 2 weeks.

Their bond grows and grows as they teach each other about hard work, compassion and empathy. Each one of us knows we have a great friend when we are inspired to be better in our own lives.

Could NOT put down! amazing story of hope

One of the best stories I have ever heard, a must read.

*** Struggled with the narration of Caitlyn overdone, too childlike, however this is still a 5 star story . Do not miss.

A roller coaster of anticipation

This story is about the best of all of us. Its about the generous, trusting, loving side of ourselves that perseveres, hope upon hope. Its also about learning personal boundaries.

Driving to and from work each day, when I park my car and turn off the book at some of the most suspenseful moments this book makes me eager to get back to the journey this story weaves between the America I know, and the unfamiliar Zimbabwe that is revealed in this book.

The focus on positive thinking is the driving force that leads these people towards the conclusion, it is compelling and inspiring.

I don't want to give away the ending, but I very rarely cry from books or movies. I cried at the end of this book. It's a treasure.

Amazing story! Inspiring, sweet, makes you see the beauty in people.
Caitlin's voice is a bit annoying. She talks like a 12-year-old throughout the book even though she is 17 at the end. In spite of this one flaw, the overall book still deserves at least five stars.

Absolutely fantastic story. A must read.

I loved this book. I got through the first 3 chapters and restarted listening to it with my son. Not only did I love it but my son loved it. Really opened his eyes to all the advantages he has living in America. Great story!!!!

As a South African who is very familiar with the USA I found the story fascinating, heartbreaking and insightful. I wish many more millions of Africans could have their fortunes improved by the generosity of Americans!

The power of love in action. What a wonderful story of human interaction and kindness. Family is not always who you are born to - sometimes others are set in your path to embrace into the fold.

This book is a must-listen for anyone who was a teenager in the 90s and ever had a pen pal. For me, it was an incredibly sweet blast of nostalgia, as I’m the same age as the authors and could identify with pieces of both their lives, having grown up in Eastern Europe and been an international student at an American university. I think most of the pop culture references will be lost on a younger audience, but is well worth a listen for kids, too.

The narrators are both great. The story is adorable and uplifting. Just great book overall, I couldn’t put it down.

This is wonderful and perfect ande everything good. When I bought it I was going to listen to one chapter before bed, and stayed up until 4am to listen, and finished it the next day. I've told pretty much everyone I know about it. It's a true story, it's beautiful, and the narration is perfect.