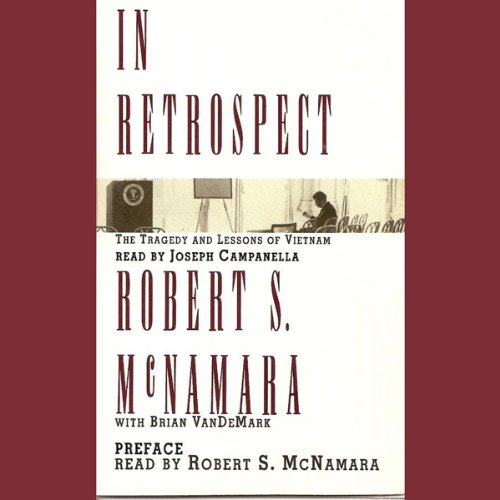 As secretary of defense for Presidents Kennedy and Johnson, Robert S. McNamara was one of the chief architects of American foreign policy, and particularly of the strategy that propelled the U.S. into the Vietnam War. Though he at first firmly believed that fighting communism in East Asia was worth the loss of American lives, McNamara eventually found himself at odds with other members of the Johnson administration when he came to see the ever-escalating was as unwinnable.

In the years since he resigned his office, he has until now refused any public comment on the unpopular war with which he was so thoroughly identified. Drawing on his personal experience and a wealth of documentation, McNamara presents a classic insider account of how Vietnam policy grew, of exactly how we stumbled into the war and exactly why it quickly became almost impossible to pull out.

Both personal and historic, his account reveals the trials of leadership, of how a generation's "best and brightest" led our nation into tragedy, and what we can learn from their mistakes.

What listeners say about In Retrospect

if you read one book on Vietnam...

Robert S. McNamara Secretary of Defense under Kennedy then Johnson is arguably responsible for the American Involvement in Vietnam, these are his reflections

Not the full text from the print version

The preface and the first two minutes are directly from the print version... Then they skip 18 PAGES -- all of McNamara's formative years! I only buy audio books when I'm having a hard time finishing up a book that I've been meaning to get to for years. I like to follow along. But that is IMPOSSIBLE to do with this edited audio version. Waste of money.

What a mess things were...

Overall, a good book, but only the introduction is read by McNamara. I was hoping to hear the story in the author's own voice. A good feel for just how screwed up things were in early Vietnam.

All too often descriptions of the failures of those who waged the Vietnam War achieve patent superficiality and ignore the context of the real threats being balanced before and during the Vietnam War.
McNamara's memoir is an honest, if frustrating assessment of his and his colleagues' handling of the Vietnam War. A tragic tale of ignorance and misjudgment that should have been heeded prior to our most recent foray into Iraq and Afghanistan.

We called it McNamara's war for a reason

Especially interesting for those who lived during the 1960s and protested the 'police action', this apology of a sort by Robert McNamara made me more angry than informed. All over again. What a terrible time it was....and here we are doing it all over again.

I suposed it ought to have been written before the Middle East wars so that something could be learned but I'm sure no one would pay attention to the points that McNamara brings to the table.

I'm glad I listened to the book once-but I'd never give it 2 listens.

I was expecting more

McNamara was probably the #1 guy getting us into Vietnam and running the war besides the deep state folks. I really thought he would provide some insight and real explanations as to what happened. It's been 44 years. You can talk. Historians and others who were there give more insight into Vietnam than what McNamara does in his book. Well over a million Vietnamese died as well as Laotians, Cambodians, 58,000 Americans dead, and billions wasted and McNamara doesn't seem to me to give much information on what went wrong. He does apologize for some things, but I'm not looking for apologies. The level of lying, corruption, waste, and indifference to the population of a nation who is forced to live in misery for a decade warrants good explanations so people in the future can learn from these reasons things went wrong. Or maybe everything went as planned. I can't tell. I thought for sure McNamara would talk about the Pentagon Papers which he had created and were the biggest story in American history at the time. McNamara spoke about two sentences about the Pentagon Papers and that was it. Very disappointing. They are available to the public now. Why not talk about them? I've studied Vietnam and was thinking McNamara's book would help future Americans understand their governments history and learn from it. I was wrong.

Would you consider the audio edition of In Retrospect to be better than the print version?

What other book might you compare In Retrospect to and why?

The Fog Of War as it discusses what led to the bad decision making.

What about Robert S. McNamara (preface) and Joseph Campanella ’s performance did you like?

Both had due enthusiasm.

My reaction is appreciation for "coming clean."

I believed the Vietnam War was a mistake even before I was drafted, and during the 13 months in combat there, and ever since. I am very glad Robert provided such detail in this book to help me understand. His "eleven causes" would be wisely considered in current foreign affairs.

Hard to believe McNamara did not understand what he was doing. Is killing civilians the way to go for the best and the brightest? What a team!

Straight from the source

It's hard to know if McNamara truly believes what he writes, has selective memory, rationalizes for his own emotional survival, or what. An undoubtedly brilliant man and whose name I think was unfairly attributed to Vietnam (McNamara's War) still failed to see the contradiction in his fundamental mode of operation even after so many decades. He swears he didn't believe bombing was the way to end the war yet he lobbied that manipulating bombing and bombing halts was the way to end it. Now whether ending and winning are synonymous is another matter but in the end all he did along with Johnson was leave our people and the Vietnamese people in the meat grinder for many years more than was necessary to reach the ends that he and others knew was inevitable. Regardless of McNamara's failings I think this is an excellent book and a must read for anyone studying Vietnam and 20th century US history.

This book was interesting because of its historical content. McNamara's realization that involvement in Vietnam was a mistake took courage to admit. Unfortunately it comes several decades too late for those brave people that gave their lives and those that carry the scars of battle today.

An interesting hind's sight review of McNamara's memoir/account as Secretary of Defense during Presidents Kennedy's and Johnson's administrations. Some of the details are a bit obscure, so I am not sure why McNamara needed to put so much minutia in the book, but for the most part I think McNamara comes across as genuine. Maybe he wanted to disclose details that had previously been left untold...? I find it amazing that policymakers and military leaders chose strategies but did not follow through with the logistics and tactics to support the operations. I also find it amazing as to how many decisions were made based on fear of hypothetical scenarios rather than known facts.