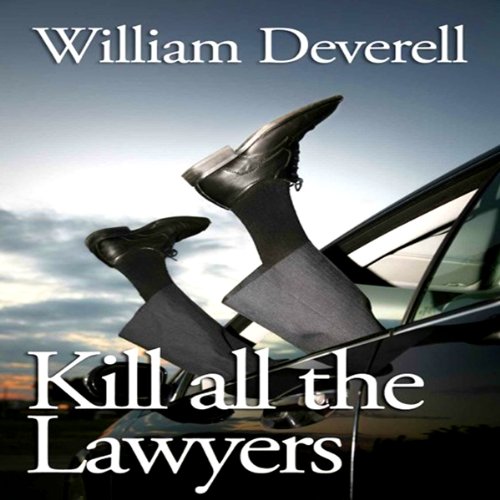 Kill All the Lawyers

Arthur P. Besterman, criminal lawyer and reformed alcoholic, was the first to go. Counsel to Vancouver's assorted shifters and grifters, Besterman almost always lost his cases. But a recent victory defending a low-life client might be a clue as to why he was bludgeoned to death with a baseball bat. Then someone takes a pot shot at philandering lawyer Brian Pomeroy after he successfully defends a group of highly controversial eco-terrorists. And so the pattern begins.

All of a sudden, lawyers whose clients are less than savory start second-guessing the ethics of their profession. Going to court becomes dangerous, no one wants to be the next on the so-called "Executioner's" hit list.

In a cat-and-mouse game involving the better part of Vancouver's legal community, Pomeroy's firm (the famous Pomeroy, Macarthur, Brovak, and Sage from the best-selling Dance of Shiva) pieces together a puzzle that points to some very disturbing truths about lawyers and the law. As one sleazy lawyer after another disappears, the listener can't help but ponder the wisdom of Shakespeare's dictum, "The first thing we do, let's kill all the lawyers."

"A bitingly funny whodunit." ( Maclean's)
"A smart, witty book with great characters and a clever plot." ( The Globe and Mail)
"An indiscreet and entertaining mystery, that will add to the author's reputation as one of Canada's finest mystery writers." ( The Montreal Gazette)

What listeners say about Kill All the Lawyers

A legal thriller - with a great twist

This is a review of the audio version of Kill All The Lawyers by William Deverell Narrated by Steve Scherf and Beverley Elliott.
I picked up this audiobook on the strength of Needles, which I listened to a few weeks back. That was an interesting book, good enough for me to go and get the other two available on audio.
A lawyer is killed after successfully defending a client in Vancouver. Shortly after, there are a few near misses and then a second lawyer is killed. What started as a tragedy quickly escalates into panic among the Vancouver legal community; someone is taking Shakespeare all too seriously: "The first thing we do, let's kill all the lawyers."
The story follows a series of characters through this period, dealing with all their secrets, including one of the main characters escape to the Caribbean to avoid a divorce suit after his wife discovers his extramarital affair. All of this is done in an entertaining, fun way. I think that Deverell really wanted to write a book in the mystery style of, say, an Agatha Christie. The result is a thoroughly Canadian take, complete with wit and humor, and lawyerly sex escapades thrown in for good measure. The ending had some great twists, an excellent homage to the genre of Christie or Rex Stout.
This book could have been difficult to listen to. It jumps from character to character, locale to locale, and while it may have been easy to follow in print form, listening to it while dodging traffic in a car could have been challenging. The reason that it wasn't is entirely due to the tremendous narration of Steve Scherf. He doesn't just read the narrative, he brings the characters to life, each with a distinctive voice. It is a genuine pleasure to hear him narrate the book.
Good book, excellent narration - 5 stars

This is as good as a movie, and should be treated like a movie or good stage show. Or made into a movie or TV series. (Maybe it has, but we don't get much Canadian TV here).

It is fast-paced, a bit raunchy, and a lot of people (well, criminal lawyers) die, the mystery aspect is well done, and it is also very amusing. Even the unsympathetic characters (and there are many) are engaging, and the sympathetic ones even more so.

The first time I listened to it, it was just confusing, I was treating it as background listening. Even though the performers are excellent and make the characters stand out distinctly, there are a lot of them, the scenes change abruptly, and it is just hard to follow what is going on. I took a chance on it again last weekend and listened to it in segments - music comes on so you can tell when the scene shifts - and totally enjoyed the action. Just wish there were more like this.