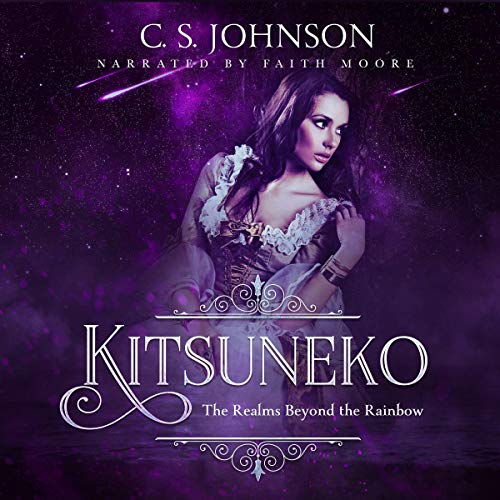 Kitsuneko: A Companion Novella to The Realms Beyond the Rainbow

Trouble is brewing in the realms beyond the rainbow....

Kitsuneko has always done her best to honor her duty. As a young fox-cat changeling, she was conscripted into slavery by King Dario and Queen Arianna of Toulacoeur to serve as the surrogate for Princess Cari, their daughter who was kidnapped 17 years ago.

But when Kiro, Cari's younger brother and the heir to the throne, proclaims his love for her, Kitsuneko is torn between her duty to the kingdom and her desire for the virtuous prince.

And when Kiro's kisses leave her breathless, Kitsuneko finds herself - and the kingdom - in mortal danger.

For the peace that Toulacoeur enjoys, maintained through the blessing of Kleon, the Unicorn Guardian, is at risk, and to maintain their rule, the king and queen have arranged for Kiro to marry Ariella, a Warlord's daughter from a tribe of Gryphon Riders.

Can Kitsuneko and Kiro find a way to be together and keep the kingdom's peace? Or is their love destined to only lead to destruction?

Kitsuneko is a companion novella to The Realms Beyond the Rainbow, a fantasy romance adventure from award-winning, genre-hopping author C. S. Johnson.

What listeners say about Kitsuneko: A Companion Novella to The Realms Beyond the Rainbow

I received this book for free for a honest review.  I loved the characters and storyline.  it flowed very well and held together.  The narrator did an excellent job of bringing the characters to life.  reccomend

interesting start with an open end.

This is listed as a companion book, but it appears to be the first and only book. The adventure ends with promises of more, but how long I will have to wait is anyone's guess.

Kit is a shape shifter who is a dangerous situation. she must impersonate the lost Princess or the king and queen will kill her. But if anyone else discovers she is an imposter, they will execute her for treason. Add to that marriage proposals and court politics.

Kit is a likeable character from the first moment. she is determined and clever and her situation instantly makes you feel for her.

Faith Moore does a great job as Kit, our first person narrator. She really managed to capture the agony one must feel, pretending to be a princess while actually being a slave.

I will certainly read more of this world and these characters, if that companion novel is ever published.

I loved this story!

I absolutely loved this story and can't wait for the next books! I listened to a review copy, but these opinions are honest.

The best story I have heard in a long time.

This might be short, but this is a winner. Get this audiobook, you will not be disappointed at all. I was already a fan of C. S. Johnson, and this was the best story I have heard or read from her so far. The narrator fit the mood and subject matter of the story perfectly. After a few minutes I even forgot this was an audiobook because I was so wrapped up in the story. I really liked the main character and connected with her right away in the first chapter. My emotions changed based on what she was going through in the story. I can not say this enough, buy this audiobook or buy the book!!!

This was a really fast, cute and clean romance. With it only being an hour and a half long it was perfect for the shorter car trip. The narration was great, my only complaint was that the sound was a bit off (sounded a bit like she was in a tunnel) once I got into the story I stopped noticing it.

What a Wonderful Surprise.

Loved this story and it was a first book in this genere for me. I really enjoyed the narrator of it as well. I will be looking to get the next book in the series. Well written and a great story to hold your attention even if you are doing something else while listening.

another great story by C. S. Johnson funny, throughout and full of laughs. hints of humor and romance towards a forbidden Love. anthological written towards the mysteries and wonders of creation. narrators great and easy-to-follow. acceptable for people of all ages

sweet romance with a little bit of adventure

A girl who grows up being forced to pretend she is someone she is not, in love with a boy she can never have. I enjoyed reading this story, even though I had a couple small quibbles with logic used in the story.

Passionate, humorous, intriguing, and sweet, this clean romance will leave you wanting to read more of Kitsuneko's story.

The narrator's voice was very well suited to this book.

Listening made it more exciting!

This was my first time to download an Audible book! I read the book a few weeks back, so it's interesting how listening to it gives a different feel. I'm actually finding it more exciting. This is a cute novella and the introduction to a brand new series featuring a unicorn deity.

Chrissy has done it again!

I absolutely love this "tail" of love and tragedy and hope! What a descriptive and alluring story brought to life by the narrator, who did a phenomenal job of expressing what the writer has brilliantly brought to life. I hope to read/listen to so much more from this bookverse.