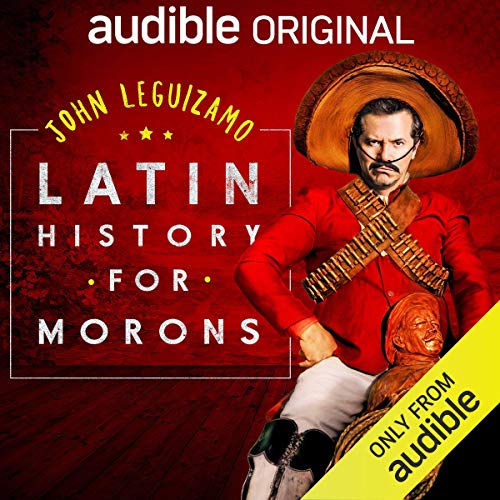 Welcome to John Leguizamo’s hilarious and educational take on 3,000 years of Latin history in 80 minutes.

When his son gets a school assignment on heroes, John seizes the chance to teach him all about the great figures of Latin American history. But once he sets out on his irreverent crash course across three continents and three millennia of history—from conquistadores to cumbia, Montezuma to Menudo, and taking on the characters in all of it—he uncovers provocative truths that shock even him.

Entertainment Weekly called Latin History for Morons “boisterous and joyful” during its Broadway run at Studio 54, directed by Tony Taccone. A play that The New York Times says “poses sharp and timely questions of what culturally defines American identity,” Leguizamo’s newest solo adventure is educational and uproarious and is adapted exclusively for Audible.

What listeners say about Latin History for Morons

John is a fantastic comedian and can tell a good story. If you are a fan, you will be quite entertained. Not much depth on any History, however it is only an hour and eighteen minutes long. Warning, this is not for young kids (PG13) for strong language and sexual themes.

Came here hoping to learn something. Disappointed by poor language and minimal information. Do Better

This was a funny, profane, yet heartbreaking account of Latin history inspired by the author's son being bullied. He discovered that Latin history was not covered in his son's school and sets about learning of it to inspire his son about their heritage. I laughed and cried, since hearing about a little boy being called racist names is heartbreaking. I hope his son and others can be proud of their unique heritage and the gifts they bring to our country. Much of what was related I already knew, having learned of it on my own. Not for kids unfortunately. A great short entertaining performance.

Drops the F bomb liberally. Blames genetics for emotional ineptitude. Rallies against racism on multiple levels. Very... original. And, he somehow manages to mention some history.

Latinos can do better

Disappointed. There was some edifying information, but pretty vulgar and crass. Wouldn't recommend to most people.

Is John Leguizamo really a VICTIM?

I’m not a Latino but I do live in Mexico, and I’ve never met a Mexican that believed the President of the USA made them something less than anyone else. Please stop your crying, grow a pair and listen to your kid. Geez!

Part history, part story of a father trying to get close to his son, and all wonderful. Leguizamo is one of the best modern story-tellers, and I’ve been a fan since seeing his one-man shows on HBO in the 90s. Listen to the sample and then get this. You’ll have some laughs and maybe a few tears, but you’ll definitely enjoy it.

I really wanted to like this. I was hoping to be enlightened to new insights and historical facts. Unfortunately it was a lot of raunchy speech, silly behavior and unnecessary info dump. I think there’s about 20 minutes total of history, but it’s given so quickly it is hard to retain. I wish we could have had a longer history lesson that was more about the facts with a sprinkle of comedy. I feel if you are trying to enlighten people to a subject you should do so otherwise you have failed at your attempt and have lost your audience. However he did recommend some wonderful historical reads on the subject written by professionals that might be the better route to take.

As a puertorican I am so proud of this! us Latinos are never recognized as heros, or contributors. Well done John!