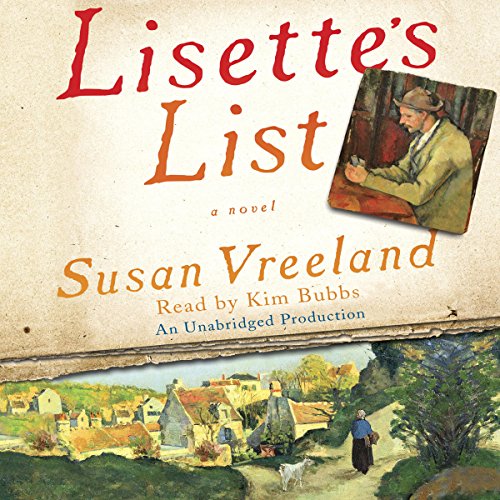 Written by: Susan Vreeland
Narrated by: Kim Bubbs
Try for $0.00

In 1937, young Lisette Roux and her husband, Andre, move from Paris to a village in Provence to care for Andre's grandfather Pascal. Lisette regrets having to give up her dream of becoming a gallery apprentice and longs for the comforts and sophistication of Paris. But as she soon discovers, the hilltop town is rich with unexpected pleasures.

Pascal once worked in the nearby ochre mines and later became a pigment salesman and frame maker; while selling his pigments in Paris, he befriended Pissarro and Cézanne, some of whose paintings he received in trade for his frames. Pascal begins to tutor Lisette in both art and life, allowing her to see his small collection of paintings and the Provençal landscape itself in a new light. Inspired by Pascal’s advice to "Do the important things first," Lisette begins a list of vows to herself (Number 4: Learn what makes a painting great). When war breaks out, Andre goes off to the front, but not before hiding Pascal’s paintings to keep them from the Nazis' reach.

With German forces spreading across Europe, the sudden fall of Paris, and the rise of Vichy France, Lisette sets out to locate the paintings (Number 11: Find the paintings in my lifetime). Her search takes her through the stunning French countryside, where she befriends Marc and Bella Chagall, who are in hiding before their flight to America, and acquaints her with the land, her neighbors, and even herself in ways she never dreamed possible. Through joy and tragedy, occupation and liberation, small acts of kindness and great acts of courage, Lisette learns to forgive the past, to live robustly, and to love again.

Wonderful story with an enchanting reader!

I have enjoyed every novel by Susan Vreeland. She is a fabulous storyteller. This tale, set in Paris and Provence from the years just before WWII through to its end, is no exception. It is filled with sumptuous word-paintings of the setting, the art and the artists of France that enhance the drama without bogging it down. Truly, this is a book to curl up with and relish. The performance of newcomer (new for me at least) Kim Bubbs greatly added to my pleasure. Bubbs is a generous reader whose mostly superbly rendered accents and mastery of cadence and lilt lent an almost musical dimension to the story. It will be hard to listen to other readers after this stellar performance. All in all, Lisette's List is one of the very best listens in my large Audible library. If my own publisher would ever permit my novel to be offered in audio, Kim Bubbs is the reader I'd insist on. Brava et brava!

Cute from start to finish

OK, dear friends, do you want the truth? Friends recommended this book to me, and I don't want to hurt any feelings, but this book did not work for me at all. By the end I absolutely hated it. For me to give it anything other than one star is a total lie.

Why it failed me is extremely simple. It is too damn cute for me.

It is about art, the art of Chagall and Pissarro and Cezanne and about the value/meaning of art. Art is personal and I do not want to be told how to think. The whole discussion of art was, for my taste, oversimplified. There is an Afterword that details how the author modified the known paintings to fit the novel.

This is primarily a book of fiction. Other than the three named artists, the characters were all fictional. The fictional story, what is that about? Romance and mystery. The time setting is WW2 and the mystery element is the disappearance of famed artwork. Were they stolen to be sold to the Germans? Who is a collaborator and who isn't? Maybe I have read too many non-fiction books on WW2 to be satisfied with this fictional presentation.

I did enjoy the author's depiction of both Roussillon, in Provence, and Paris. She captured the magnetism, the beauty and the unique atmosphere of both. I love both Roussillon and Paris; both are very special to me personally. I appreciated that the author acknowledged how one can come to love and feel at home in more than one place on this earth. Nevertheless, I cannot give an additional star because on concluding the book I felt I really disliked it.

I have zero complaints with the audiobook's narration by Kim Bubbs. Delightful French.

I haven't painted in a while. This story made me anxious to return.
I feel inspired by the descriptions of the works, the stories about some wonderful artists, my knowledge of each painting discussed. I could see the works as the narrator read.
I haven't cried in a while, certainly not while reading a book, however hearing Lisette's pain at the loss of her husband made me cry for the widows then and now, and helped me to form a new understanding of their loss.
The sweetness of Lisette is a little annoying but her plight reminded me of my own as I struggled to adapt to a loss of luxury and privilege ,learning to work at chores my mother never knew. I felt pride at my accomplishment just as Lisette did.
For me this was a wonderful book. Perhaps if one is not an artist, an art lover, or a lover of France, one would not be as enamored of it as was I.

What made the experience of listening to Lisette's List the most enjoyable?

wonderful characters, charming story, a bit of a mystery, a love story times two. I really enjoyed it. will read again

Charming Tour de France with delightful characters, insight into WW2 in a fresh way, descriptions of Provençal, Paris and art took me to places I have never been in real life but now feel as though I have been. Enjoyed the reader's careful pronunciations of words appropriate to each regional accent.
Loved it!

Not Your Typical WWII Book

I highly recommend this book if you like art, France, history and a well written story. It is set in WWII but varies from the usual type of war story. While there are issues about the war, it is more about life than death.

I loved this book from the beginning to the end. The story is very well written and engaging. A true Vreeland treasure. The performance was excellent. I would listen to this one again!

I didn't want it to end

The story line was fine - but secondary to my enjoyment of this book. The writing was beautiful. I was transported by Vreeland's descriptions of color, art, and the countryside. The discussion of French art and artists (Pissaro, Picasso, Chagall) was fascinating. One of the most enjoyable reads (listens) I've experienced in a while.

Her French was flawless. Her name certainly doesn't sound French, but I would have bet she was a native speaker.

Lovely writing. I enjoyed the description of Roussillon, France and its environs. I have distant ancestors from there and plan to visit someday. The voice over actor is fantastic!

Where does Lisette's List rank among all the audiobooks you’ve listened to so far?

The performance of Lisette's List was wonderful and made up for the story. Among audiobooks, this one was long winded and overall not a favorite.

The ending was actually excellent. Everything tied together. It as the middle of the book, or the second half that was disappointing, as though it was tacked on to make the book longer.

The ending scene with all the people surrounding her and her ability to do a really good deed ...somehow I could see the group smiling and happy.

I really did not like the middle half...the search for the paintings. The story was interesting except for that.