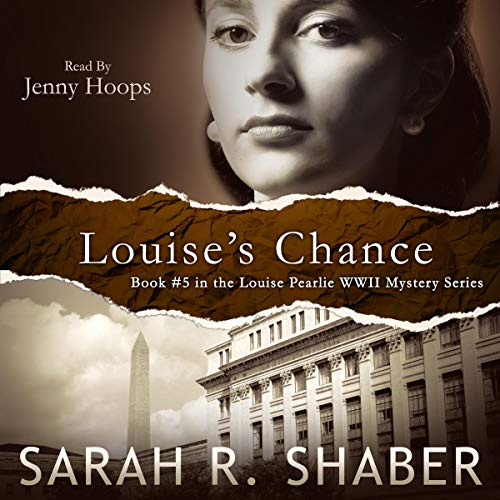 Government girl Louise gets her big chance when she is tasked with recruiting German POWs for a secret mission inside Nazi Germany.

1940s Washington, DC, government girl Louise Pearlie has a new job inside the OSS -the Office of Strategic Services: recruiting German prisoners of war for a secret mission inside Nazi Germany. It’s a big chance for her, and Louise hopes she can finally escape her filing and typing duties.

With the job comes two new colleagues: Alice Osborne, a propaganda expert, and Merle Ellison, a forger from Texas who just happens to speak fluent German. But when the three arrive at Fort Meade camp to interview the first German POWs to arrive there, their mission is beset by complications. Only one of the prisoners speaks English, the army officer in charge of the camp is an alcoholic, and two prisoners disappeared on the ship bringing the Germans to the states. Were their deaths suicide? Officially, yes. But Louise can’t help but have her doubts....

“A fine example of the historical mystery ... The whodunit is well-crafted, with enough red herrings to keep readers guessing.” (Star News Online)

What listeners say about Louise's Chance

This series just gets better for me. I usually start burning out around the third book in a series. Shaber keeps her writing fresh and writes from a real female perspective (or maybe I just relate to Louise Pearlie so much). Louise isn't a beautiful woman who uses her wiles to get her way. She uses her intelligence, logic and deductive reasoning. I learned new things about the WWll era but the facts are interjected into the writing in a way that makes the scenes come alive. The reader feels right there with the protagonist as she experiences new things. This book had Louise Pearlie going out in the field more often than she was in the last couple of books. Or maybe it felt that way because she actually got on a plane to reach the POW camp. She has a new job and a new boss. Louise and her boss begin asking questions about two men that disappeared overboard on the way to the camp. I highly recommend this series to anyone who loves mysteries and/or period pieces.

A new assignment and promotion for Louise, turns out to have many complication. To interview German POW to recruit to distribute flyers of propaganda, and the three women on this assignment, none spoke German. Would they in turn be taken prisoners. A tension filled story and wonder how they will get out. Given audio for my voluntary review and my honest opinion

I received this book for free. I am voluntarily posting this review and all opinions expressed herein are my own. This is book five of the Louise Pearlie series. It is a standalone and you do not have to have read the prior books in the series to enjoy this one. The prior books do provide some great historical background information on Louise and the time period [WWII] of the story. As the series occurs during WWII, the attitudes of the time towards woman, races, and cultures are prevalent. I find this to be a very enjoyable series. I love how the MC Louise is smart, observant, and very clever. She does, however, frequently downplay her intelligence - especially in deference to men - in fear of losing her job for being too outspoken. The tightrope that she walks in trying to achieve success as a woman in her time period and remain independent is very compelling. A great new twist - Louise is moved to a new assignment within the government and her boss is a woman. I love the historical aspects of the story and the mystery involving the deaths of the German POW's. The narrator, Jenny Hoops, is fabulous, as always.

You Will Love These

I have listened to each of these Louise stories that are available on Audible. The stories are fun and believable and Jenny Hoops does a great job as narrator, Her Southern accent is charming and as I am from the South, totally believable. I only wish Audible had the other episodes that are missing.

Louise’s adventure through the war is informative and impactful. She works with prisoners of war in this book and it’s interesting to see how some were not with the nazi. This will be on the favorites shelf.

WW2, spies, prisoners-of-war, amateur-sleuth, historical-novel, historical-research, historical-setting, friendship ***** Louise is a 30ish widow working in the OSS in a clerical capacity when she is tagged for a job within the agency as assistant to a propaganda expert. The pay is better but some parts are a bit scary, like her very first airplane ride and then staying close to a POW camp to take notes while prisoners are interviewed. Lots of things are very real, like the effects of rationing and attitudes towards women. There are a couple of subplots that add interesting aspects as well. Jenny Hoops is the perfect voice performance narrator as she really adds good things to the characters. I was very lucky to win the audio in a giveaway!

Sarah R. Shaber has created a wonderful series based on an office worker in the 1940's. Louise is so much more than she appears. She is intelligent and uses that for her investigations. Louise's Chance is her opportunity with a new job and a new boss. I loved how the author has woven historical details into the story. Jenny Hoops performs this book flawlessly. She adds dimension to the characters. I requested this review copy audiobook and have voluntarily written this review. I will definitely listen to more books by this author and narrator.

This is the 5th book in the Louise Pearlie Mysteries, but it stands alone. I very much enjoyed the story which combines WWII and cozy mysteries which are my favorite genres. Louise works for the US government in the Office of Strategic Services and has finally been promoted.. This time she is in an American POW camp for Germans. She is trying to recruit some POWs to spread pro American propaganda in Germany. Great story. Nicely read by narrator. This book was given to me for free at my request and I provided this voluntary review.