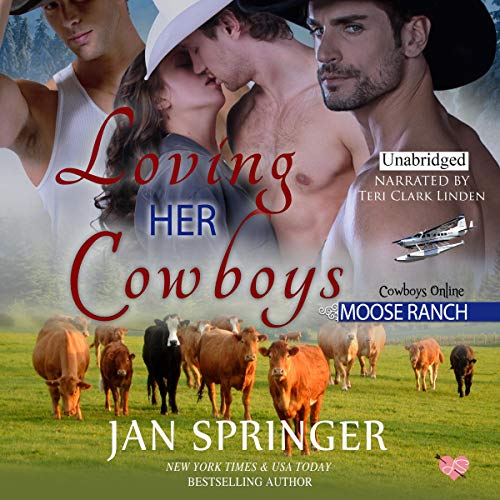 After spending 10 years in a maximum-security prison Jennifer Jane (JJ) Watson got early parole and a job on a remote Canadian cattle ranch playing housekeeper to three of the sexiest cowboys she’s ever met...a single woman shouldn’t be experiencing such scorching menages with three sexy-as-sin men. Her love for her cowboys continues to grow as she gives into the fevered heat and scorching passions she feels for each of them.

Passion burns bright when she’s wrapped in the arms of her cowboys. But JJ’s simmering restlessness explodes and she’s seriously making up for lost time by pursuing her dreams. There’s only one little problem. She hasn’t revealed to her bosses what she’s been up to while they’re away tending to the cattle and doing their ranch chores. She knows when they discover her secret, there will be hell to pay.

Ranchers Rafe, Dan and Brady have found the woman who completes them. She makes their secluded ranch a home-sweet-home. She’s vulnerable, sweet, and willing to share her bed with all three of them. But when JJ’s secret is unwittingly revealed, they’re stunned, angry, and they figure it’s time to dole out some fiery punishment in some mighty naughty ways....

What listeners say about Loving Her Cowboys: Moose Ranch

I enjoyed it! The narration was good and kept me entertained. The author did a good job with the characters and plot. I look forward to reading more books by this author. I was given this free review copy audiobook at my request and have voluntarily left this review.

This story continues the adventures of JJ Watson and her three cowboys. The four are beginning to settle in and find where they all fit in. They seem to always have some kind of major excitement going on. This time is no different. JJ and her men go through more problems and must learn to trust and believe in each other.

I liked that JJ has begun to grow some in this book. She shows some promise, but it seems that the men are overprotective of her and to not let her grow as much as she could and many times they fall back on sex when they are arguing. JJ continues to waffle between wanting to be strong and to just doing what her men tell her. Just when I think she is growing strong she falls back into being the good little housewife with no opinions of her own but to make her men happy. For me this is the best story of the three. It was interesting to see some of the developments of their relationship as it begins to grow. Narrator Teri Clark Linden keeps the flow of the story moving nicely.

Another terrific eddition for JJ & her men. I love how JJ is taking control of her fears and working through them. It is encouraging and and filled with hope. I'm looking forward to hearing if her hopes for the future come to fruition.

In this third book of the series, we find our foursome of three cowboys and paroled convict JJ still ranching in the wilds of Northern Ontario. Without all the background from the first two books, I don't think Loving Her Cowboys would be as enjoyable. For me, the best part of the book was watching JJ finally learn that she is a strong and capable woman. After having suffered many tragedies and ten years of living in a tiny prison cell, JJ has many phobias and suffers frequent panic attacks. Although her men are kind, loving and accepting of JJ, she wants so badly to be a strong member of their family, and she makes that happen in very impressive ways in this story.

Of course, being the overprotective alpha males that we met in books one and two, Dan, Rafe and Brady struggle to believe that JJ's attempts at self growth don't mean that she wants to leave them. Luckily, JJ knows just how to show her men that she wants only to be with them, and the steamy scenes that result are delightfully naughty. As much as I enjoyed the well written sex scenes, it is even more the expanding emotional attachment between the four that made my enjoyment of this story complete. I look forward to seeing what Springer has in store for this small family next.

Teri Clark Linden narrates all the books in the series, and I enjoy that continuity. She has an excellent voice, and her delivery is flawless. Although she doesn't differentiate overly between characters, she does just enough to distinguish between JJ and her cowboys, and I easily followed which character was speaking.

I received a copy of this audiobook at my request in exchange for this honest review.

I felt this book was better then the first 2 books. It had a good story line, and still kinda hot. heat level 3 1/2 flames.

The vocal actor (Teri Clark Linden)was the same as the first 2 books but I think she did much better in this one. Solid 4 stars.

It was good but not as hot as the others. The amount of Condoms is boring. I don’t understand why they use them for oral. It’s annoying. I love this series tho just wish there was less protection.

Although the story was still good and I will be looking regularly for the release of #4. I felt like this book was just a tiny tease. And that’s frustrating. I would have liked to have gotten more, instead it felt like a chapter in the whole story.