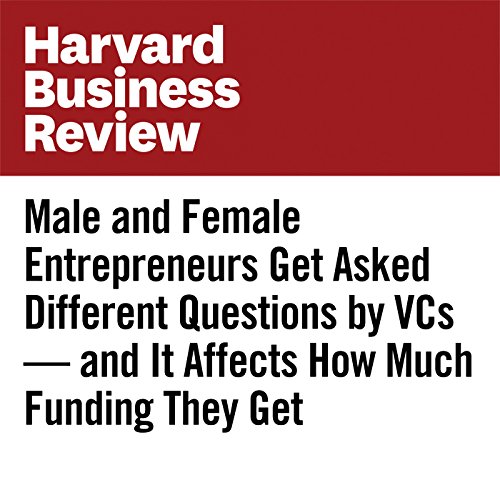 There is an enormous gender gap in venture capital funding in the United States. Female entrepreneurs receive only about 2% of all venture funding, despite owning 38% of the businesses in the country. The prevailing hope among academics, policy makers, and practitioners alike has been that this gap will narrow as more women become venture capitalists. However, homophily does not seem to be the only culprit behind the funding gap. Over the past several years, the U.S. has seen an increase in the number of female venture capitalists (from 3% of all VCs in 2014 to an estimated 7% today), but the funding gap has only widened.

"Male and Female Entrepreneurs Get Asked Different Questions by VCs — and It Affects How Much Funding They Get" is from hbr.org, published on June 27, 2017.

The first time I heard about this work, I had just got rejected from a close to dream job. I was to take over the role of head of strategy for a mid size company. After rounds of interviews, time to meet the CEO. From hello, how do I pronounce the name, I knew I would be in trouble. Next comes, as the article suggest a long tsunami of preventative questions and my struggle to show all the ideas I had presented to other executives about where to go.

When I read this report and later attended one of Laura Huang’s seminar I reloaded how important this work is to help move us more towards a diverse and inclusive business community. Had I known the trick, would it have helped me? I don’t know but sure help me present my best self.