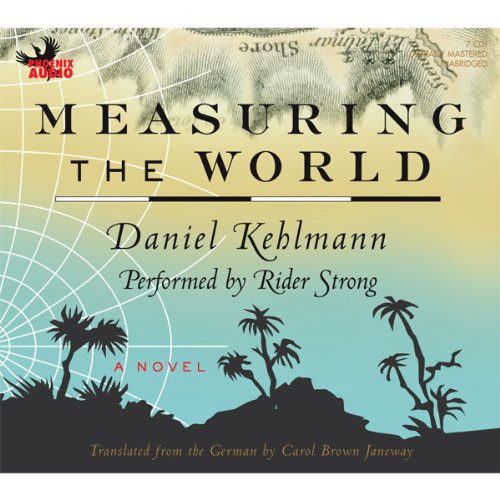 Written by: Daniel Kehlmann
Narrated by: Rider Strong
Try for $0.00

The young Austrian writer Daniel Kehlmann conjures a brilliant and gently comic novel from the lives of two geniuses of the Enlightenment.

Toward the end of the 18th century, two young Germans set out to measure the world. One of them, the Prussian aristocrat Alexander von Humboldt, negotiates savannas and jungle, travels down the Orinoco River, tastes poisons, climbs the highest mountain known to man, counts head lice, and explores every hole in the ground. The other, the barely socialized mathematician and astronomer Carl Friedrich Gauss, does not even need to leave his home in Göttingen to prove that space is curved. He can run prime numbers in his head. He cannot imagine a life without women, yet he jumps out of bed on his wedding night to jot down a mathematical formula.

Von Humboldt is known to history as the Second Columbus. Gauss is recognized as the greatest mathematical brain since Newton. Terrifyingly famous and more than eccentric in their old age, the two meet in Berlin in 1828. Gauss had hardly climbed out of his carriage before both men were embroiled in the political turmoil sweeping through Germany after Napoleon's fall.

Already a huge best seller in Germany, Measuring the World marks the debut of a glorious new talent on the international scene.

"Brilliant." (Kirkus)
"Measuring the World has proved to be nothing less than a literary sensation." (The Guardian)
"Notable for its brisk pacing, lively prose, and wry humor...which keenly complements Kehlmann's intelligent, if not especially deep, treatment of science, mathematics, and reason at the end of the Enlightenment." (Publishers Weekly)

What listeners say about Measuring the World

I find the story gripping and entertaining. Not being Gauss, I didn't count the large number of times I laughed aloud while listening to it. The narrator isn't my favorite narrator, but he does a good job. There are problems with the translation that bug me, but I ignored them and was thoroughly entertained and even somewhat educated by this novel. I rarely write reviews, but upon finding two reviews that trashed it, I thought it my duty to toss in my 2 cents.

I'm about one third in the book and the editing of the audiobook is very very bad: long pauses right in the middle of conversations, or ending and beginning of two different chapters merged together as part of one sentence. You have to guess what happened from the context. It makes listening to the book more academic and less pleasurable.
I personally didn't feel the narrator chose the right tone for the book as well, but I am not sure if it's just bad editing that threw me off.
Overall, I feel like I'm persevering with this book even though I like the content and would probably enjoy had it been performed and/or edited differently.

Give this a berth -- a wide one

I heard the author reading parts of this and it sounded excellent. The narrator, Rider Strong, reads the book as though he is reading it aloud for the first time and clearly has yet to learn what a full stop and a comma mean. I want my credit back.

I was hugely disappointed with this book - as it had been given fantastic reviews (especially in Europe where I live).

There is no clear point to the story, there are no climaxes, it ends very very strangely - and the narrator keeps a monotone voice throughout.

I'm baffled - and I just don't get the point what the author is trying to tell....

Interesting for initiates not sure about everyone else

If you have had more than your fair share of the sciences, this book will feel like an old friend. I thoroughly enjoyed and understood it. Quixotic, Godotesque, and scientific all wrapped up in the humanities. An honest book.

This is a fascinating story but the fact that it's translated I think led to some confusing passages. The narrator also didn't delineate the characters well, which sometimes made it harder to follow who was speaking and what was going on.

Worst reader ever. No respect for a comma.

The story was interesting but I couldn't get past the awful narration of the reader. The reader was so off-putting that I had to slog through. With so many excellent narrators on Audible, it's astounding that a German best-seller novel with good translation was list in poor cadence.

I agree with Henrik.

He said it all. Do not waste your time.