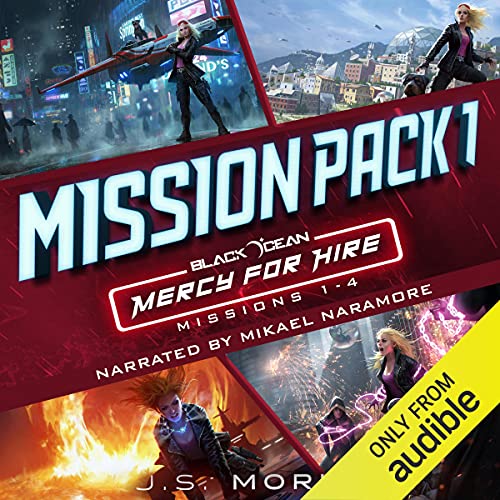 Written by: J.S. Morin
Narrated by: Mikael Naramore
Try for $0.00

The galaxy’s worst bounty hunter just might be its most relentless hero.

Esper is a vigilante Samaritian with more moral fiber than business sense. Any bounty hunter worth the title knows three rules:

But with a heart of gold and her companion Kubu by her side, Esper sets out to make the galaxy a better place, preferably making enough money to pay for the fuel to get from one job to the next. But just because she’s not cut out to be ruthless doesn’t mean the galaxy is going to eat her alive.

After all, Esper is also a wizard.

A runaway teen needs protection, and Esper takes the job. But a simple rescue and recovery turns ugly when Esper finds herself in the middle of a custody battle with a vicious pirate who’s hired a bounty hunter of his own.

On the run from troubles of her own, Esper tries to lie low on a suspiciously Utopian colony planet. Unable to keep out of other people’s troubles, Esper gets a terrifying look into justice on a world where truth is a matter of who you know.

Mission 3: House of the Orion Sun

Esper’s mission to protect the galaxy’s most vulnerable takes a turn for the seedy when she tracks a trafficking victim. How long can she hold out when her morals are tested at every turn?

Esper’s own dark past catches up with her when bounty-hunting wizards corner her. Esper has faced down the galaxy’s worst criminals. Now, she’s going to be forced to stand up to one of the galaxy’s most esteemed institutions - Convocation of Arcane Practitioners.

What listeners say about Mercy for Hire Mission Pack 1: Missions 1-4

a fun listen, but Esper's brand of overpowering morality is ridiculous, bordering on frustrating at times. She is as controlling as her mother was but she never sees it.

Great narration brings it all together

Mikael Naramore has great range to bring to life so many unique and wonderful characters each one easy to differentiate from the last. It’s refreshing in a sea of audio books with voices that blend together almost indistinguishable from each other.

Couple this with a protagonist you just can’t help but root for in let’s face it everyone’s favorite feature of the black ocean.. space wizards. This series is as good if not better the galaxy outlaws although I do love every appearance the old gang makes. I highly recommend any of the mercy for hire audio books and further more anything narrates by Mikael Naramore

too much swearing. The narrator is so good, that every time a character swears, it is punchy and difficult to ignore. The main characters don't swear but most of the secondary characters swear constantly. Some characters seam to swear every other word. F-bombs galore. It is most disconcerting and they make me cringe every time. Now, if this doesn't bother you, then you will enjoy these Black Ocean books. However, if too much swearing is an irritant, then be warned. Also, one of the stories is very dark with horrible slurs against women. I could hardly bear to listen to that section and thought about skipping over it numerous times.

only for esper fans for the rest pass on this.

tough listen if you hate the hypocrisy and moral high ground of esper. good narrator

Nice Return to the Black Ocean

Coming back to the J.S. Morin's Black Ocean and the great Mikael Naramore's narration was like meeting an old friend.

Although I do miss the original characters (and probably enjoyed their cameo's the most) the missions around Esper were a bit more one dimensional and straight forward with less turns and twists. I did enjoy seeing Espers and Kubus growth in this series and hope that continues.

The narration was fantastic. I can't wait for Mission pack 2.

Too,"Holier than thou" Esper is too soft and lame.

I should have took the hint when the title was "Mercy" for hire. They are not kidding. It is overkill on the mercy. The moral high ground B.S. is at a ridiculous level. It's literally like listening to 80's Care Bear story. I guess it would be great for a tween audience. I couldn't take it anymore. I am going to try to get a refund on mission pack 2. I love most Black Ocean stories. This one is just way too "goodie two shoes" for me. It got me to the point where I can't even stand Esper anymore. Too bad, she has so much potential.

Author phoned this one in....

I enjoyed Galaxy Outlaws, but this sequel doesn't come close. I expected more, but I couldn't finish it.

A fun return to the Black Ocean

I found J.S. Morin's Galaxy Outlaws series (Black Ocean Mobius Missions) a delight. Not every story was perfect, but like an excellent television show, they all added up to a beautifully rich and entertaining web of stories that were just plain fun. Here, with his Black Ocean: Mercy for Hire series, he is attempting to continue what he did so successfully in the previous series. Unfortunately, he doesn't quite have the full cast nor the space to really pull it off in this "mission pack" he's put together. As a sequel series, this was as nostalgic as it was fun, reminiscent of the old magic. Esper doesn't quite have the "magic" Carl did as a central character, but she comes close sometimes.

The stories themselves are fun. I, for one, love the idea of an "old" and powerful wizard who seems to be a beautiful young lady...the incongruity of it (especially when paired with Esper's naive attempts at doing good) seems to be fertile ground for fun and bizarre adventures. Sadly, this series isn't quite as creatively crazy with its premises as the previous series. Morin continues his technique of quietly developing some larger character and story arcs in the background while dealing with a specific story at hand. And it works for most of this, but at the end I found myself less than satisfied. Mainly because I feel like Morin has more of Esper's story he wants to tell (or at least that I want him to tell), and I hope he gets around to it.

All in all, a fun collection. I'm not sure if people who haven't read/listened to the other series will find this as fun or as interesting. I would highly recommend listening to the other series first (seriously, why wouldn't you? It's like 85+ hours for one credit and a ton of fun). Then come back here for a little additional action in the Black Ocean universe.

Naramore continues his role as the narrator and does so phenomenally. He makes the story come alive in a way that makes the fact that he's essentially reading it disappear. You forget about him and just enjoy the narration and characters - and that's the way it's supposed to be. I absolutely love his narration here. Phenomenal.

Oh, how the main character makes me want to slap her into action from time to time, "YOU ARE POWERFUL!! STOP BEING SO NAIVE!" lol. Love it.

A sad follow-up to a great series.

I only gave this book two stars because of how great Galaxy Outlaws was. If you're looking for a book about a giant dog who is never giant, and a "powerful" wizard who is terrified of her own powers (and only really uses them one time), then I'm sure you'll be interested in this book. Also, I guess Esper is just a lesbian now? This book had one of the absolute worst story arcs I have read in a long, long time. It was actually so bad that I ended up just skipping it.

This was awesome. I’m waiting for the next installment. Even if you haven’t heard the rest of his books this team (author and narrator) will keep you enthralled if you enjoy sci-f’s with a strong heroine and lots of action.

Once I finished original adventures I felt the adventures should continue, there was more space to explore!
Space odyssey turned into a bad TV novel where same questions of fairness, gender inequality and frustrated morals with feelings of frustration are regurgitated on and on and on.

I have not finished first pack and not even started the second one.
Esper character is flat and does not grow at all.

ended somewhat abruptly but at least mission pack 2 is already out so I'm headed right to that one. loved this collection