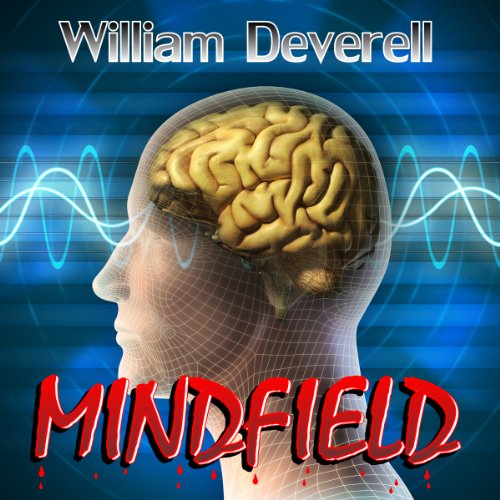 It is 20 below in Montreal, and for the first time in 25 years detective Kellen O’Reilly is going to pieces. Flashbacks frequently take him back to the psychiatric clinic of Coldhaven Manor and the terrifying experiments of Dr. Gregor Satorius.

What listeners say about Mindfield

Fantastic narration for a great story

Set against the backdrop of project MKUltra (a real program (1950-1973) that experimented with the behavioral engineering of humans by the CIA), Mindfield is the latest William Deverell novel brought to life by Steve and Maggie Scherf. Of the Deverell novels I’ve listened to as audiobooks, this has been my favorite. First, the setting is Montreal in the 1970’s, so listening to it was like a trip back to my youth. Second, it is a very well written book, engaging and satisfying. Finally it was very well read, making it easy and enjoyable to listen to.
Mindfield is the story of Kellen O’Reilly, a Montreal Police Detective, and the flashbacks he has to a time when he volunteered for a program that he thought would help him deal with the death of his father, also a Montreal Police Officer (and give him a bit of money on the side). O’Reilly finds himself on a case that has ties back to this program, and his flashbacks increase in frequency. The story covers his journey back to his past where he finds the clues to unlock his current case, and mixes in the backdrop of a Police strike with a newly found love interest. O’Reilly not only has to confront his own demons, but also deals with the death of a close friend and the bureaucracy of an urban Police Department.
The story is very well read by Steve and Maggie Scherf. The way that they bring the characters to life, and make it so easy to keep track of each character (and Mr. Deverall’s novels always have a large cast of characters), make it a joy to listen to.
If you haven’t been exposed to William Deverell’s novels before, this is a great place to start. If you are a fan of audiobooks you can’t do better than listen to this one.
Great book, fantastic narration, 5 stars.

What did you love best about Mindfield?

I enjoyed the book very much. It was an interesting story that kept me engaged til the end.

The idea of mind control by the government was most interesting, and least interesting was probably the setting for me.

What does Steve Scherf and Maggie Scherf bring to the story that you wouldn’t experience if you just read the book?

A lot of audio books have one voice trying to become both male and female voices. Having both voices adds to the ability to understand the different characters.

It was an enjoyable book and easy to follow.

This tension filled thriller should be added to your “Must Listen” list.

We loaded with eager anticipation the latest Deverell-Scherf book as part of our audio stock for a recent five-day road trip. It did not let us down. The plot twists and turns, fast pace and building suspense – as the hunter became the hunted – had us glued to our seats.

Scherf is a performer extraordinaire – not simply a narrator. The unique voice of each character conjures up a vivid image – from the sinister Dr. Sartorius to sleazy thugs to a bureaucratic police chief to our hero - the Montreal cop Kellen O’Reilly. Maggie Scherf adds spice as she brings the sexy and standoffish lawyer Sarah Paradis to life.

Without a doubt, William Deverell is a pro at writing crime thrillers and Steve Scherf does an excellent job of bringing this intriguing story of sordid subterfuge to life. What a treat to listen to Steve Scherf’s clever renditions of the multitudinous characters that play a key role in uncovering one of the CIA’s best kept secrets. With his vivid interpretation of characters such as the tormented protagonist, police officer Kellen O’Reilley, and the ruthless experimenter Dr. Sartorius, Steve Scherf transports us to an unimaginable world of mind control in downtown Montreal in the 1950’s. Meanwhile, Maggie Scherf’s talented rendition of characters such as the tenacious Sarah Paradis keeps this suspenseful thriller moving at a fast pace. C’est une histoire fantastique!

Too awful performance to listen to

The narrators are awful, particularly the woman. She sounds like she is reading a bad script, not acting the part, and she sounds like she's in a tunnel. It's irritating enough that I'm not finishing the book. It didn't have a good start any way.

What would have made Mindfield better?

Different narrators. I gave the book three stars because I could not really give a good or bad review of it because the narration was so bad I could not get enough in to the story line to know if the book was good or bad.

Would you be willing to try another book from William Deverell? Why or why not?

Since I was not able to get in to the story enough to really know anything about whether I liked the story line or not, I would have no reason not to try another book, or even try this one again with different narration.

What didn’t you like about Steve Scherf and Maggie Scherf ’s performance?

I just couldn't do it. I tried multiple times to listen to this book, but I had to stop every time. The man's narration sounded like each sentence/phrase/part of a sentence was recorded on its own. Like he'd say every line, stop, and then say another line. It wasn't read, it wasn't performed, it was just very choppy. Each line on its own may sound fine, I suppose, if you isolate it. But there is no flow whatsoever. You know when you see videos or hear audio where someone has clipped together a whole bunch of soundbites from different monologues/texts/speeches/whatever, and put them together to make a whole new video/audio? It was almost reminiscent of that. The woman was horrid also. Sounded like an SNL skit about a bad actress. She emphasized every word that was a noun or adjective, it was hard to listen to. It made you think more about what her, and how she must look to be talking like that, and then you miss the whole story line. The man did it to a degree also, but not as bad. Just listen to the audio sample, and imagine listening to seven hours of that. I recommend moving on.

Couldn't make it past 30 minutes

Would you try another book from William Deverell and/or Steve Scherf and Maggie Scherf ?

Nope... just could not get interested in this performance at all. Gave up on the project.

The story itself had a certain something, with an interesting premise. The performance failed to deliver.

Would you be willing to try another one of Steve Scherf and Maggie Scherf ’s performances?

No. It was rife with hokey accents, wooden deliveries and mispronunciations. The French accents sounded more like bad Spanish or Mexican, the Canadian accents were just weird. The American accents were OK, but you'd expect that from Americans. Where one character's voice was described as 'bass', as in low-pitched, the reader said 'bass' as in the fish. Stolichnaya vodka became Stolicknaya vodka. On the whole, I'd expect as much from a high school drama club. The only positive thing I can say about it is that at least nobody had to attempt to voice the opposite gender.

Maybe. Then again, Hollywood would probably just make it worse.

What disappointed you about Mindfield?

This was one dumb story and hard to follow. Wasted my money.

What was most disappointing about William Deverell’s story?

Better story line. Audible should not have feature the book.

This is just plain awful.

I am disappointed that Audible would feature this mess as something "recommended". The story is cookie-cutter and the narration is some of the worst I have ever heard. I was forced to stop after I found myself "rewinding" constantly because my mind just couldn't focus on it. Two thumbs down. I feel that the initial 5 star reviews that made me try this are more than a little misleading...