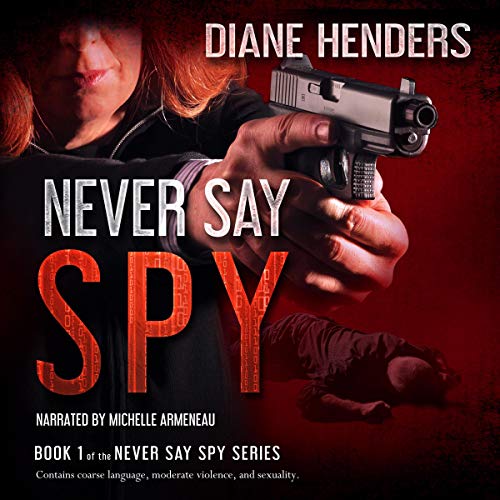 Despite her penchant for weapons and ripe language, Aydan Kelly's resumé reads 'bookkeeper', not 'badass'. She's leaving the city to fulfill her dream of rural tranquility when she gets carjacked by a man who shouldn't exist.

When RCMP officer John Kane kills her would-be abductor, Aydan thinks her troubles are over. But Kane's investigation implicates her in an international espionage plot, and criminal charges become the least of her worries when she's targeted by the very spies Kane suspects her of aiding.

Pity her enemies. Because nobody's tougher than a middle-aged woman who wants her dream back.

Contains coarse language, moderate violence, and sexuality. The story can stand alone but will be more enjoyable if read in order.

The story was great from the beginning. I
It kept you guessing. I really enjoyed it.

What would have made Never Say Spy better?

Better narrator. The plot was OK, but the narrator didn't carry off the male characters well. The hero, Kane, came off sounding annoyed with everyone and everything, while Hellhound sounded like he was from the backwoods of Kentucky. Her inflections were out of place also. The main character's sarcastic or flippant remarks fell flat.I spent a lot of time listening to the main character whine about being hungry and demanding to be fed. She also spent a lot of time doing "yoga breathing." Based on what was happening to her, the freaks out seemed inappropriate, while at other times, the fact that she wasn't seemed odd.

I know that there are people who are totally prepared for every eventuality, but between her ubiquitus backpack and waist pouch, she had everything covered from clothes to food, to tools. If she needed a three-sided, hexagon-shaped buber tuber lancing tool, voila! She had one. It's no wonder Kane didn't believe she was a spy.

It's an interesting plot and the author unfolded it well. I'm not sure if I'm willing to force my way through the narrator to listen to more of this series.

Would you be willing to try another book from Diane Henders? Why or why not?

Yes, but only if someone else reads the book.

She couldn't act. If she'd just read the book without changing her voice for the different characters, it might have been better. In several places, her attempt at being flippant didn't work. I'm not even sure that's what the author intended because it seemed out of place.

The plot was interesting.

GREAT series, but not as great in audiobook

Ebook review (2013) 5 stars
Loved it! I enjoyed the characters and the action, but especially the way the author tells the story by peeling back layers. At 33% I'd already marked 7 words that I hadn't seen used before. Loving that! The characters are unique and likable. The story kept me interested. I will definitely be reading the rest of this series!

Audiobook review (2020) 4 stars
I read this book in 2013 and absolutely loved it! (Diane Henders remains one of my favorite writers. I've even accused her of living my alternate life.) When the Book 2 was released on audio, I bought them both. Obviously the story is still fantastic, but I wasn't a fan of the narrator, Michelle Armeneau. She had the Canadian accent, but her voice sounded 10-15 years older than the character (who is late 40s; 48, I think). Her performance was good, too. Just an age issue that made it hard for me to balance the character that kicks ass like a 30 year old, but sounds like a 60 year old. My advice... read it. Read the ENTIRE series. It's fabulous!!

Narrator was good, author had quite an imagination. I thoroughly enjoyed listening to this book. Funny, serious, and sometimes sexy.

okay at beginning but too contrived plot ending. little too much sexual fantacy to be believable

I liked this audio book! It may not be for some, due to a brief torture scene (which I fast forwarded through). I found the female protagonist to be strong, smart, and sassy. She also made mistakes which I wanted to scream "Don't do that!" Or "don't go there!". Which tells you that I was completely enthralled by this audio book!

I love this book. The main character is a woman who, though she is not Superwoman, does not make me roll my eyes. She doesn't flounce, she doesn't simper , nor avoid making decisions while awaiting rescue.

michelle armenau did an excellent job reading this story!! Great story and very exciting to listen to.