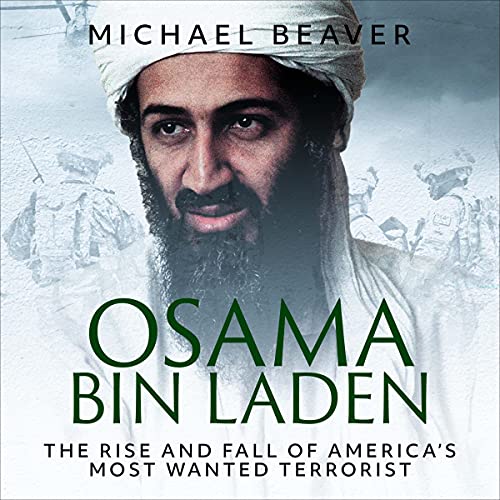 Written by: Michael Beaver
Narrated by: Bilal Celoro
Try for $0.00

Bin Laden, friend or foe to the US?

How did Bin Laden switch from a US ally to the most wanted terrorist?

How was he able to successfully open Al Qaeda cells in the US and strike the most damaging blow to the heart of the US?

How did he spread his organization throughout Europe, the Middle East, and parts of Africa?

How were the authorities able to locate and kill him after 10 years of evading their capture?

Bin Laden was born in Saudi Arabia to a rich father, Mohammed Bin Awad Bin Laden. He received a Western education from secondary school to college. He was a devout Muslim who saw the 1979 invasion of Afghanistan by the Soviets as an affront to civilization and Islam. He, therefore, organized his men to help the mujahideen fight the Soviets and drive them out of Afghanistan during the Cold War. The US, in their bid to assert their world power and supremacy, backed and fortified the mujahideen in their fight against the Soviets.

Since Bin Laden was also on the side of the mujahideen, he was considered an ally of the US. Bin Laden drew up a plan to fight the Soviets, which proved to be successful. After the war, however, the former allies (Bin Laden and the US) became bitter enemies. He planned the most successful and devastating attack to hit the Americans on their own soil. Every detail of how he was able to pull it off with severely limited technology and resources against the well-advanced technologies and military power of the US is contained in this book. Also included is how he managed to evade their pursuit and capture for 10 years.

In this book, you’ll discover:

If you’re interested in the life of Bin Laden, details of his activities, and the controversies surrounding his role in the history of the US, then click the buy now button and grab your copy!