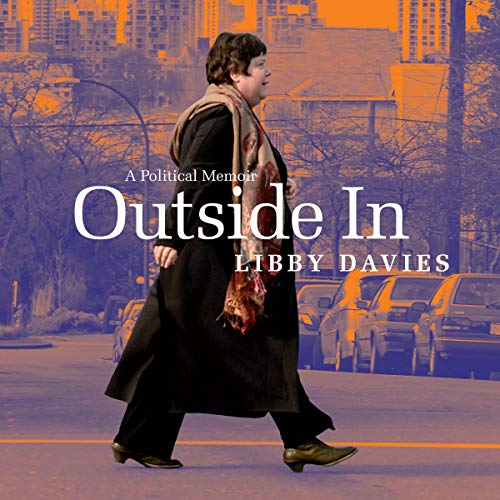 Written by: Libby Davies
Narrated by: Marilla Wex
Try for $0.00

Libby Davies has worked steadfastly for social justice both inside parliament and out on the streets for more than four decades. At 19, Davies became a community organizer in Vancouver’s Downtown Eastside. She went on to serve in municipal and then federal politics, advancing to the role of deputy leader of the New Democratic Party.

Davies looks back on her remarkable life and career with candid humor and heart-rending honesty. She addresses the challenges of her work on homelessness, sex workers’ rights, and ending drug prohibition. She illuminates the human strengths and foibles at the core of each issue, her own as well as those of her colleagues and activist allies. Davies’ astute political analysis offers an insider’s perspective that never loses touch with the people she fights alongside. Outside In is both a political and personal memoir of Davies’ 40 years of work at the intersection of politics and social movements.

“The willingness to think and feel deeply combined with [Davies’] refusal to demonize her foes make this a perceptive and hopeful work that will appeal to those who are tired of a political default to cynicism.” (Matthew Behrens, Quill & Quire)

“What is noteworthy about Libby Davies’ political autobiography Outside In: A Political Memoir is that it offers us a more complex form of reminiscence: the book includes not only the decisions of political elites but also the role of political activists and social movements - those on the outside - in their struggle against larger structural forces. The text inspires engagement and should be read by every member of a progressive social movement or political party.” (Thomas Ponniah, rabble.ca)

What listeners say about Outside In