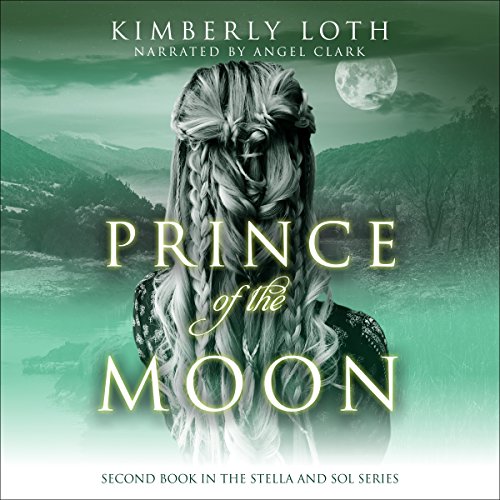 Prince of the Moon

Written by: Kimberly Loth
Narrated by: Angel Clark
Try for $0.00

Zwaantie enters Stella with only one goal: Find Phoenix and run away. Only she discovers that Phoenix has disappeared - without her.

Stella is unlike anything Zwaantie has ever experienced. From the bright lights to the moving pictures, it's all overwhelming. The moment she steps foot in the country she wants only one thing - to go home. Her plans go awry when Leo reveals to her the real reason he needs to marry her - to thwart an awful prophecy and save his sister's baby from the flesh-eating monsters. Not only that, but the Voice has somehow followed her into Stella and wants her dead. She can't go home.

Trapped in a world where her every move is on display, engaged to a man she doesn't love, and with death around every corner, Zwaantie seeks solace in newfound friends and magic she never believed possible. Will Zwaantie rise as the powerful princess she should be and do the right thing, or will she forsake all for her own happiness?

What listeners say about Prince of the Moon

Whoa!!
The world biking of Stella is simply magical and amazing!! I was wishing I lived there till I found out what comes out after midnight.
The plot and twists were great and I didn’t seem them coming. Zwaantie, bless her heart is doing the best she can while in Stella. I may be a bit heartbroken about Phoenix. *sigh*
I really enjoyed listening to the audiobook. Angel Clark portrays everyone so well. Her voice, and the world building elevated the story for me. She kept me enthralled till the very end.
I look forward to seeing what happens next. I feel like it may be a doozy for Zwaantie.

Can't wait to start the next book!

This book was even better than the first! I absolutely cannot wait to start the next book and see where this series goes!

Disclaimer: I received a free copy of this audiobook in exchange for an honest review.

Prince of the Moon (Stella and Sol, Book 2) begins right where audio one left off as Zwaantie enters Stella.. A continous listening audio that keeps you on your toes. With this audio new supporting characters get intoduced along with a new twist. The setting of the story is very intriguing. We enter the dark world of Stella, the kingdom of eternal night, with magic & potions. Stella is a modern city with tall buildings and magical artifacts that are captivating. Stella's Kingdom is a strong contrast of the world of Sol. The voice is a facinating villian and I want to know more about it and its true identity. The plot of this audio is riveting & remarkablly written. A spellbinding journey with compelling character's. Looking forward to listening to book three.

Narator Angel Clark performance was smooth flowing through with good inflection. I absolutely love the voice and the creative way its portrayed.

Absolutely love this audio and series, looking forward to listening to the next audio in this fantasy series.

In this book Zwaantie is in Stella and things are different here. For one the slaves are free including Luna which has an affect on her. She doesn’t want to marry Leo and wants to still run away with Phoenix but she is having a hard time finding him. Leo introduces Zwaantie to her brother Ari and Sage his sister who she really likes. Leo has to go away for work which leaves Ari, Sage and Zwaantie spending a lot of time together. The first night Sage convinces Zwaantie to sleep over in her room but the next morning Zwaantie finds her room full of Vipers. Even in Stella someone wants her dead which is hard to comprehend.

Kimberly Loth has amazing story's. this one is really good so far can't wait to hear the rest

Wow! As I have listened to the second book in the series it has really heated up. Plot thickens and everyone has grown and changed a lot. Just how I like a good story to be told. Angel Clark does a fair job in bringing alive the characters and story.

loved it. keeps me wanting to know more of the story. cant wait to read more.