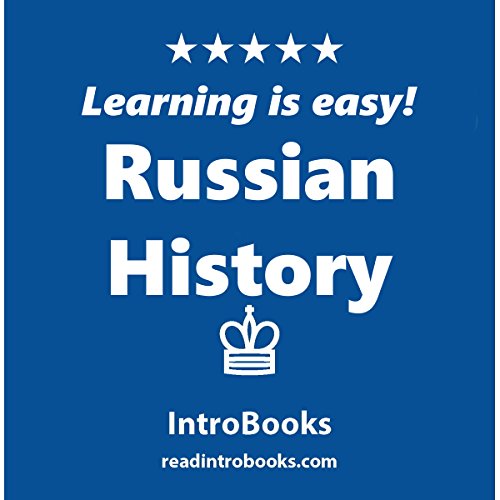 Written by: IntroBooks
Narrated by: Cyrus Nilo
Try for $0.00

The history of Russia is anticipated to be a commonly comprehensible and plainly structured outline of Russia's history since 1283, after the rise of Moscow. Russia was at its best in the 13th century when Moscow became a center for cultural activities. The Russian Tsardom was now a huge empire which spread from the Polish-Lithuanian Commonwealth in the west to the Pacific Ocean. Succeeding governments of the 19th century retorted to such stresses with an amalgamation of unenthusiastic reform and subjugation. Serfdom in Russia was obliterated in 1861 but its abolition was attained on terms which were not favorable to the rustics and aided in increasing radical pressures. The phase between the serfdom and the beginning of World War I in 1914, State Duma, the Stolypin reforms and the constitution of 1906 endeavored to open and slacken the Russian politics and economy but the tsars were reluctant to renounce autocratic rule or part with their supremacy.

A mix of fiscal breakdown, dissatisfaction with the autocratic government and wearies of the war elicited the 1917 Russian Revolution and first brought an association of moderate socialists and liberals to power, however their unsuccessful policies led to the confiscation of their control by the Communist Bolsheviks in October 25. The crucial history of the Soviet Union is between the 1922 and 1991, effectually Russia was a state based on ideology that indelicately had the same history as it did before the Treaty of Brest-Litovsk. Socialism was however build differently over various eras in the Russian history, from the varied society and variegated economy and ethos of 1920s to tyranny and authoritative economy of Stalin to the 1980s era of stagnation. From its initial years in March 1918, the government in the Soviet Union was grounded on the one-party rule of the Communists (this is what Bolsheviks called themselves). By the mid-1980s, with the faintness of its fiscal and administrative edifices getting severe, Mikhail Gorbachev made important alterations, which led to the descent of the Soviet Union. Formally the history of Russian Federation begins in January 1992; they were the lawful successors to the Soviet Union on the global stage.

Russia's superpowers have gone astray after confronting stern encounters in its struggles to form a new post-Soviet fiscal and administrative system. Scrapping the socialist crucial preparation and national possession of property of the Soviet era, Russia endeavored to form an economy centered on market entrepreneurship, frequently with difficult consequences. In this century, Vladimir Putin has been its governing leader. Even now Russia shares much continuity of political principles and communal construction with its Soviet and tsarist past.

What listeners say about Russian History