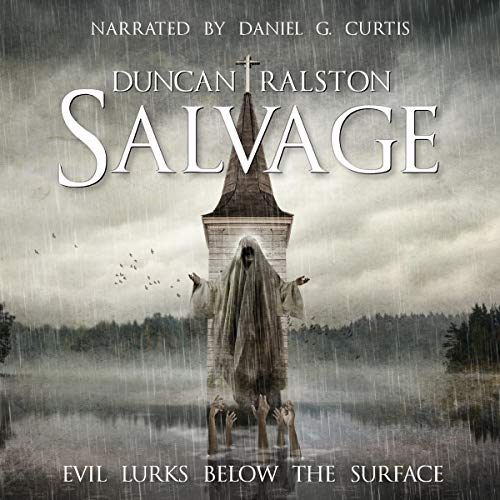 Something is lurking under the lake...

Struggling to come to terms with the sudden death of his sister, Owen Saddler becomes obsessed with the lake that claimed her life. The remains of a forgotten town rest at the bottom of that dark body of water - along with a host of buried secrets.

Thirty years earlier, the town of Peace Falls had been flooded to build a hydroelectric dam, and its ruins remain below the surface of Chapel Lake. The strange disappearance of the town pastor, along with many of the parishioners, still haunts the citizens of Chapel Lake. But does the church haunt the lake itself? Is Owen really seeing ghosts...or has he descended into the depths of madness?

Salvage is the debut horror novel of author Duncan Ralston. A disturbing story of depression, religious fanaticism, and the afterlife, Salvage seeks to illuminate the darkness within us all.

What listeners say about Salvage

Even Better on Audio!

Excellent modern ghost story! Ralston HAS been compared to Stephen King, but don't let that concern you.

The narrator was excellent!

Not a typical ghost story

Owen is in mourning after the death of his younger sister. He decides to visit the house she was renting and try to piece together her last days. She was renting a house on the shores of Chapel Lake which is a popular diving destination due to the submerged town under the lake. His sister drown while diving and Owen does not think it was an accident. This is a combination ghost, cult, and who done it. It was well written with some honest characters that you will feel bad for.
Duncan Ralston is amazing with the different types of books he can write. I have read four of his books and no two are similar.

A truly excellent ghost story. I really liked the writing, for moments with a dreamlike quality that instead of alleviating the suspense, it made it stronger.

This is a ghost story, but it is also a murder's mystery and the story of Owen Saddler's search for his father; and about the unravelling of his past. It's about mental illness, and about redemption.

Oh! And I liked very much that the protagonist is a man in his 40s, good choice! It gives another level to the story, because this is a man whose whole concept of the world is being challenged. His first reaction is not: OMG, a ghost! No, his first reaction is OMG! I'm schizophrenic! He has lived all his life with depression, so of course, he doubts his sanity. And that self-doubt creates even more layers to the story.

So, yes, I really, really liked it.

This is, no doubt, an author that I need to keep in mind.

And Daniel G. Curtis does a very good job with the narration.

Thoroughly enjoyed the story, but the narration bordered on monotone. A captivating ghost story! It could have been even better with a more emotional narration.

A supernatural tale that will keep you guessing

I had read this book a good while back but honestly it is so well written that it is just one of those stories that you enjoy revisiting from time to time. Although this time I added the audible narration which allowed me to enjoy it more while still getting chores done.
What really makes this such a good story is not just having well written characters but the subtle way that religion was interwoven with the supernatural making you constantly question everything as you attempt to unravel the mystery to figure out the whole story. The fact that you can end up coming to several different conclusions with good reasons behind each but still be wrong just goes to show how well written the plot line is. Truly a great story.

I recently discovered Duncan Ralston after I read Woom (a Matt Shaw production), so when I ran across the opportunity to get a review copy of the audio for this one, I jumped all over it.

Salvage is less extreme than Woom, but for a straight up ghost story it has some truly creepy and disturbing scenes in it. The back story and “mystery” plots are very well done and the narrator does an admirable job of keeping the pacing of the story moving as the towns skeletons are slowly revealed.

Very well done. I will be looking forward to more work from Mr. Ralston. 4.5 Audible Stars!

I did not like anything about this book.... Besides the character Howie. I honestly don't know if it was the monotone voice of the narrator, the storyline or both together. Maybe if there was another narrator I would have liked it but I'm really not sure. I would literally zone out and start thinking of other things while listening to the narrator when I was driving. It caused me to have to go back a whole chapter because I had no idea what was going on when I refocused on listening.
The main character was possibly depressed and the narrators monotone voice made that even more evident throughout the whole book. As a matter of fact everyone sounded deeply depressed in this book... even the ghost.
I got to the last 15 minutes of the book and I couldn't take it anymore. I had to listen to something else and force myself to go back and listen to the last 15 minutes. The ending was so bland and anticlimactic for a ghost story that I wasn't sure if it was actually the finality of the book or a "to be continued" type ending.
I regret wasting my Audible credit on this book. I'm not sure if I will try this author again. I'm surely going to avoid books with this narrator.

Daniel G Curtis does a great narration of this book.Owen is obsessed with the drowning death of his sister.He decides to follow her footsteps and realizes that he'd been there before.People do not want to help him and say that his sister stirred up trouble.Everything stems back to the flooding of the town that now sits at the bottom of the lake.“I was voluntarily provided this free review copy audiobook by the author, narrator, or publisher