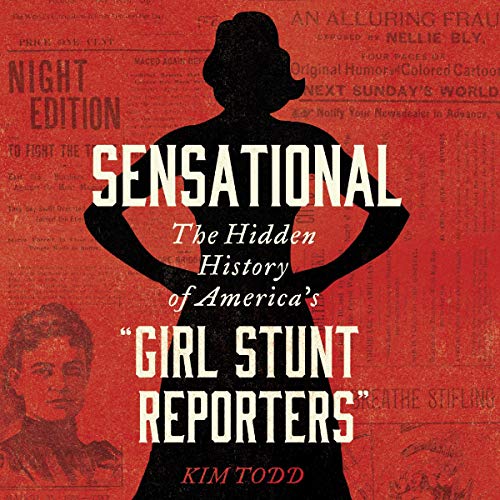 Written by: Kim Todd
Narrated by: Maggi-Meg Reed
Try for $0.00

"A gripping, flawlessly researched, and overdue portrait of America’s trailblazing female journalists. Kim Todd has restored these long-forgotten mavericks to their rightful place in American history." (Abbott Kahler, author - as Karen Abbott - of The Ghosts of Eden Park and Liar, Temptress, Soldier, Spy)

A vivid social history that brings to light the “girl stunt reporters” of the Gilded Age who went undercover to expose corruption and abuse in America, and redefined what it meant to be a woman and a journalist - pioneers whose influence continues to be felt today.

In the waning years of the 19th century, women journalists across the United States risked reputation and their own safety to expose the hazardous conditions under which many Americans lived and worked. In various disguises, they stole into sewing factories to report on child labor, fainted in the streets to test public hospital treatment, posed as lobbyists to reveal corrupt politicians. Inventive writers whose in-depth narratives made headlines for weeks at a stretch, these “girl stunt reporters” changed laws, helped launch a labor movement, championed women’s rights, and redefined journalism for the modern age.

The 1880s and 1890s witnessed a revolution in journalism as publisher titans like Hearst and Pulitzer used weapons of innovation and scandal to battle it out for market share. As they sought new ways to draw readers in, they found their answer in young women flooding into cities to seek their fortunes. When Nellie Bly went undercover into Blackwell’s Insane Asylum for Women and emerged with a scathing indictment of what she found there, the resulting sensation created opportunity for a whole new wave of writers. In a time of few jobs and few rights for women, here was a path to lives of excitement and meaning.

After only a decade of headlines and fame, though, these trailblazers faced a vicious public backlash. Accused of practicing “yellow journalism", their popularity waned until “stunt reporter” became a badge of shame. But their influence on the field of journalism would arc across a century, from the Progressive Era “muckraking” of the 1900s to the personal “New Journalism” of the 1960s and ’70s, to the “immersion journalism” and “creative nonfiction” of today. Bold and unconventional, these writers changed how people would tell stories forever.

What listeners say about Sensational

Thoroughly engaging, a timeless illumination of the role of women in American journalism, needed more now than ever.