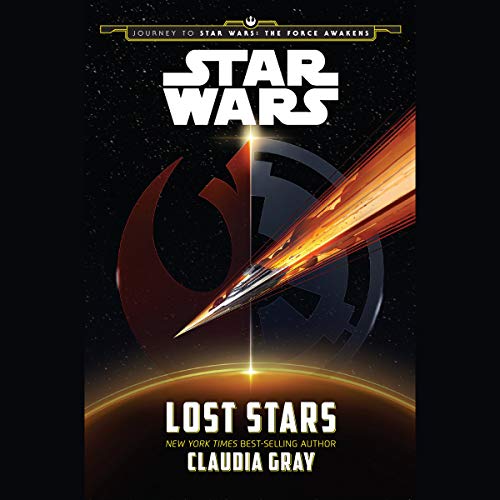 Written by: Claudia Gray
Narrated by: Pierce Cravens
Try for $0.00

This thrilling young adult novel gives listeners a macro view of some of the most important events in the Star Wars universe, from the rise of the Rebellion to the fall of the Empire. Listeners will experience these major moments through the eyes of two childhood friends - Ciena Ree and Thane Kyrell - who have grown up to become an Imperial officer and a Rebel pilot. Now on opposite sides of the war, will these two star-crossed lovers reunite, or will duty tear them - and the galaxy - apart?

Star Wars: Lost Stars also includes all-new post-Star Wars: Return of the Jedi content as well as hints and clues about the upcoming film Star Wars: The Force Awakens, making this a must-listen for all Star Wars fans.

The stories unraveled in this collection of Star Wars audiobooks are as vast and varied as the galaxy far, far away in which they’re set. Overlapping timelines, canon shifts, film companion novels, and an endless cast of characters make it entirely possible for you to listen to nothing but Star Wars material for a long, long time. Such a wealth of content by passionate creators with limitless imaginations meant that we had a well of selections to draw from for our roundup, with recommendations for both die-hard fans and newly initiated acolytes. Get ready to soar with the Skywalkers as you dig into the 20 best Star Wars audiobooks available.

The story was amazing from the start. The concept of unfulfilled love was done very well here. Yet, the ending left you wanting a different result after everything the characters went through.

I thoroughly enjoyed it. A perfect love story if ever there was one, in my opinion

Such a great listen!

This is my first ever audiobook, and I loved the vast majority of the experience, and how it follows the events of the original Star Wars trilogy and beyond into the most interesting planetary aftermath shown in The Force Awakens. Always in my thoughts. Thank you Claudia :)

A more probable look at the Empire

Claudia does it again, didn't think I'd really enjoy an original story with no known characters but this worked so well. The lovers are a great pair, the timeline of the first to 2nd death star worked so well, the pain in the characters was real.

Why was this plot better than the sequels? Because the characters had depth and conflict. Nothing more to say, wish we could go on with these characters in the future.

In the youtini 5 foundation books for a reason made me want to read more.

I liked the book and story. However, the end left much to be desired. Definitely recommend though

Great side story to the saga!

A great look into the imperial sympathizer perspective of the saga. You care about the main players as well as their supporting cast through great character development. The story and characters had me invested right to the last page. One of my favourite side stories to the new canon.

Can’t Decide Between Meh and Bleah...

I barely hung on. I found the characters frustrating. The overall plot is a bland retelling of the original trilogy from the perspective of two unbelievably stubborn pig-heads. Their ideals were too thin to be compelling. If you’re an audiobook fan be forwarned this production has unrelenting recycled sound effects and music score from the movies.

Cure for the Aftermath Blues

I can't say how much better Lost Stars was than Aftermath. A single storyline, tieing into the Saga but only as background.

True Imperial devotee and absolute synic journeying through military life, the reign and fall of the Empire. This is what Star Wars books are at their best. They tell a story anyone could relate to, if they only lived in a galaxy far, far away.

Thank you Ms. Gray for restoring my faith in the new Star Wars canon. Please come back and write more for us fans!

What made the experience of listening to Star Wars: Lost Stars the most enjoyable?

The characters are well written and very believable. It also shows a side rarely explored. 2 normal people who served the Empire, caught up in the wonders of a galaxy never seen, to belatedly find out they boarded a sinking ship! They slowly learn the Empire they thought, that brought hope and order, only brought death, and misery and had to figure out, what to do with themselves. The relationship between the 2 main characters both changing and being tested over time, was also masterfully written. Must read...listen! Ahem!

What other book might you compare Star Wars: Lost Stars to and why?

The Fate of the Jedi series from EU. The relationship of Ben Skywalker and Vestara, is one of the few times a friendship turned love, was also handled so well. The whole, "from the other side of the fence...", but I still want you aspect. It was handled well.

Anything with both mains in it.

If you remotely like Star Wars and want a SW book that can handle love/lust and unbreakable bonds, get it! It's not just some rehash of the movies, but slightly retold. The description does it no justice. It has some of the historical moments of the movies yes, but cleverly worked in and not shoe horned. Wish the last 7 minutes were about the main characters, but that was my only complaint.

One of the best new Star Wars books

This is one of the best books of the new Star Wars canon. It shows what true devotion, both to a cause and to another person is. Lost Stars also does a great job of fitting around the Star Wars movies, showing the events from a different perspective. It also makes me feel sad for those who were lost when the Death Star was blown up, it does a good job of humanizing the people of the empire.

So that's how the Star Destroyer got on Jakku!

Star Wars: Lost Stars was a better book, more informative, and more enlightening than "Aftermath". A great step closer to The Force Awakens!

Classified as Young Adult but strong writing and deeeeeep story make this a must read!

If you love the Star Wars universe you will love everything that makes this book an emotional journey through nostalgia and a new hope for the future.

Good and different look at the Star Wars Universe

I really enjoyed Lost Stars,Claudia Gray did a fantastic job of intermingling the plot of her book with the original three movies. I liked the way Gray didn't try to write Star Wars it came naturally without the movie cliches.
The things I didn't like was the beginning, it took a while before I was really hooked into the story. Also I didn't like that it had a few moments that really felt like a Twilight story, but being a love story it wasn't too much.

I enjoyed this Star Wars
Novel. The 4 journey to the force awakens novels have been good reads and much more enjoyable then aftermath which was just a mess. This novel runs through the original trilogy and into the force awakens it's Romeo and Juliet meets starship troopers
Meets Star Wars

A pleasant surprise and much better than Aftermath

Thane Kyrell. Realized he made a mistake joining the Imperial Forces, and went with his sense of justice. Faithful to the end. Just a well written and rounded character.

He sounds too young and that made the sex scenes creepy.

I was an avid reader of the Expanded Universe, now designated "Legends." I am sorry to see it go, but I'm willing to give the new stuff a try because I'm really looking forward to the new movie. I am working my way through all of the "new canon" books, including these that are part of the official "Journey to The Force Awakens." I admit I was pleasantly surprised by this book. I was not expecting to like it because of the star-crossed lovers angle, but I really did enjoy it in spite of that. I enjoyed seeing the events of the original trilogy (and events that would have happened off-screen) through the eyes of new characters, several of whom were imperials. And as opposed to other books in the "Journey" line, there is an obvious tie-in to the new movie, and the possibility that characters from this novel will be involved. A couple of points - At first I thought the narrator was calling their home planet of Jelucan as "Jello-can." I kept seeing a large can of Jello in my mind, even after checking the spelling on Wookiepedia.

Age is all wrong. Ciena Ree was born the same year as Luke and Leia. That would make her 24 at the time of the battle of Jakku. Commanding a Star Destroyer at the age of 24, only a few years after graduation from the Academy - doesn't work. Even though they tried to explain it by the loss of senior officers in the destruction of the 2 death stars, I just don't see it happening, especially with a person who has been out of action for nearly a year recovering from severe wounds. Reminds me of how the new Captain Kirk went from cadet to Captain in one fell swoop in the new Star Trek movies. Perhaps JJ Abrams is influencing the Star Wars books as well, not just directing.

There are several sex scenes that I didn't really need in a Star Wars book. Though not explicit, they do directly refer to sex and evoke images of naked bodies, etc. The fact that the narrator sounds like he's about 14 made these scenes feel kinda creepy. (He's 29, I checked, but doesn't sound like it) I understand that they support the whole star crossed lovers theme, but I would have enjoyed the story just as much (maybe more) if they were just platonic friends, perhaps two childhood friends that had grown up together and then apart - Such as if Luke and Biggs had ended up on different sides of the conflict.

So again - overall, I enjoyed it, much more than I expected to. But they should have had Marc Thompson or Jonathan Davis narrate.

An excellent addition to the new cannon. A great love story and summary of the Star Wars saga leading into the new trilogy.