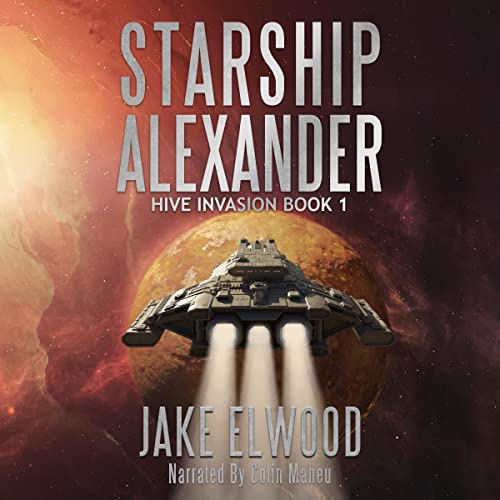 Written by: Jake Elwood
Narrated by: Colin Maheu
Try for $0.00

A washed-up captain. A worn-out ship. A crew of green cadets. And they're Earth's only hope.

The Alexander is the last true warship, a relic from the days of interstellar war. She's destined for the scrapyard, and her captain, Richard Hammett, is about to retire. Their last mission is a training run with a ship full of cadets.

It's supposed to be a routine hop through a wormhole gate. But gates have been going offline, one after another, and Hammett knows in his bones it means trouble. The kind of trouble only a real warship can handle.

Defying orders, he takes the Alexander through another gate, and puts the ship smack dab in the path of an alien invasion. Now a captain at the end of his career will have to take dozens of terrified cadets and forge them into a crew of warriors, because the Alexander is all that stands between the Earth and the swarming ships of the Hive.

What listeners say about Starship Alexander

Please not that old saw again!!

I had passed over Starship Alexander several times in my quest to find a book to listen to during the usual Monday gristmill because the summary outlined a cookie cutter plot: Old ship going out on its last mission with a full load of cadets as observers and captained by a short timer whose career covers a tendency to bend rules and reg's and interpret his orders to suit him. Of course this time the ship ends up in a running battle with Aliens who are better armed. Sound familiar? Don't let it fool you! This book made me resent the clock and any interruptions. Jake Elwood made Starship Alexander an engrossing tale full of adventure and action with a large compliment of well developed characters that interacted well with clear distinction of good guys, bad guys and utterly evil aliens. Colin Maheu, the narrator was flawless and from the opening line, kept me entranced. All I can say is that Assume did its thing and I was the one with the big ears......

Not Unique, But Quirky Characters Rise It Above

Its a unique character story fit into an overused but yet exhilarating model of a hero captain that is being unused forced to take control of humanity's last chance against an alien threat, while the government and naval admirality is reducing all ability to fight during a peace time apathy. The viewpoint of crewmen from multiple viewpoints rises it from the average to unique making it a very enjoyable read and start to a new series.

Incredible series from a new author !

I have been enjoying this new author , unfortunately his books are out yet not in audible just yet . I’m going to keep checking , in the hopes that they show up shortly . I enjoy Military space ship battles if well written . Jake Elwood and his editing and production folks are really earning there Pay .