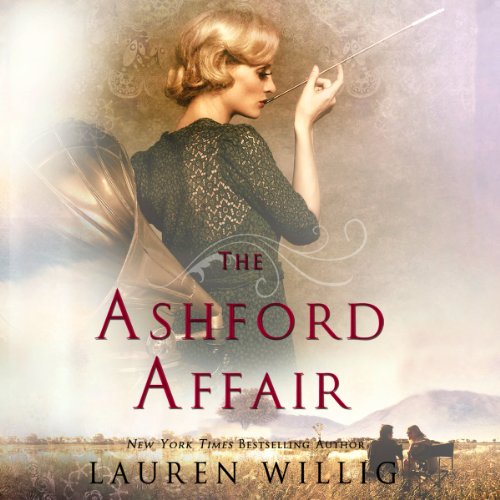 Written by: Lauren Willig
Narrated by: Nicola Barber
Try for $0.00

From New York Times best-selling author Lauren Willig comes The Ashford Affair, a story about two women in different eras, and on different continents, who are connected by one deeply buried secret.

As a lawyer in a large Manhattan firm, just shy of making partner, Clementine Evans has finally achieved almost everything she’s been working towards - but now she’s not sure it’s enough. Her long hours have led to a broken engagement and, suddenly single at 34, she feels her messy life crumbling around her. But when the family gathers for her grandmother Addie’s 99th birthday, a relative lets slip hints about a long-buried family secret, leading Clemmie on a journey into the past that could change everything.

Growing up at Ashford Park in the early 20th century, Addie has never quite belonged. When her parents passed away, she was taken into the grand English house by her aristocratic aunt and uncle, and raised side-by-side with her beautiful and outgoing cousin, Bea. Though they are as different as night and day, Addie and Bea are closer than sisters, through relationships and challenges, and a war that changes the face of Europe irrevocably. But what happens when something finally comes along that can’t be shared? When the love of sisterhood is tested by a bond that’s even stronger?

From the inner circles of British society to the skyscrapers of Manhattan and the red-dirt hills of Kenya, the never-told secrets of a woman and a family unfurl.

What listeners say about The Ashford Affair

Solid book overall. Interesting story. However, the characters lose depth on account of the narrator. The narrator's normal voice is fine, but her dialogue voice makes the women, who are supposed to be in their 20s and the 30s, sound like 16 year old girls. The men all sound one dimensional as well.

Still overall enjoyable, especially if you like the era.

Would you listen to The Ashford Affair again? Why?

Yes. I really enjoyed this book. It was fun, romantic, sweet, and just plain lovely.

The narrator, who did have a great accent, and did lovely voices, kept whispering and I couldn't hear a lot of the book--having to rewind while I was in the car was annoying, and changing the volume up and down was really irritating. I couldn't decide if it was an editing problem or if it was the reading style. The volume of these books needs to stay at the same level throughout because we can't be distracted while we are driving! I ended up having to use my headphones, which is not ideal when in the car because I can't hear what else is going on (plus, on a two hour commute, having those things in my ears for that long is uncomfortable!)--and even then it didn't always work.

After Lauren Willig's previous, VERY disappointing book "Two L," I was SO HAPPY when "The Ashford Affair" proved to me, once again, that she's not just a flash in the pan.

Reader whispers everything that's narrated. It's a published book, there are no secrets. Very annoying to listen to and I had to keep volume at maximum.

I started out by giving this book a 5 star rating. I loved reading it. It was interesting, gripping, and the characters were intriguing - for the most part. I couldn't put the book down.

That being said, I deducted a star (it would have been half a star if that was available) because I found the ending lacking something. Nothing major, just a little disappointment that the strength of the story seemed to fade.

The premise was wonderful; the writing was superb. Nicola Barber did another great job with the narration except that she sometimes gave Clemmie too much of a baby voice. That may have been part of my disappointment in the ending of the book because it seems Clemmie's voice got worse then.

I liked this book a lot

This book was a HUGE disappointment!!

I downloaded it on impulse after skimming over some promising reviews. I saw hopeful things like: “Downton Abbey” “Sweeping Saga” “Kate Morton” … what could go wrong?

GROAN. So. Not. Good. I was expecting Kate Morton and instead got Danielle Steel.

None of the characters are interesting, in fact they are maddening flat and cliché. Take our heroine for example, Clemmy. Ugh, that NAME! Clemmy, I hate it! It sounds like clammy. She is a modern super woman, but not too perfect since she has a crappy love life. Awww, good, now we mortals can relate to her and her silk hot pink lacy underwear. (When packing for a business trip to London, on a whim she decides to forgo the white cotton and be more risqué - was the point of that??? So dumb.)

Through Clappy, ...sorry – Clemmy, we discover the story of her beloved Granny Addie (ugh – too cutesy) in a series of flashbacks mixed in with modern day revelations. This style of storytelling can be really good IF THE MYSTERY IS INTERESTING.

I suppose you can say there are two “big events” in the story but I don’t want to give too much away. The first regards someone’s true identity and when Clippy, ...sorry – Clemmy, discovers the hidden secret she’s supposed to be angry and outraged and incensed, but instead she comes across more petulant than anything else which makes the whole story ten times more ridiculous. The second involves a disappearance and never really got juicy.

I won’t even bother getting into criticizing the romances (Climpy’s, sorry – Clemmy’s, and Addie’s) because in all fairness I find romances boring anyway.… suffice it to say it was not very original and kinda predictable.

I was ready to give up half way through and ask for my money back, but changed my mind and decided to hate-read it instead since I was not in the mood for anything else.

This book would make good material for a drinking game: every time Cloppy, ...sorry – Clemmy, thinks “there was something about the way ______” take a sip!! Equally easy for every time she gets a “prickly feeling on her skin” … it happened so often I began to wonder if the poor woman had a skin disease!!

Clearly, this book did nothing for me aside from providing me with perverse entertainment.

but got mediocre. I really felt story line was good but it never got meaty enough for me. just seemed skimpy on filling out details. and then it just sort of stopped. narrator better with men voices than women. everyone sounded like a little girl.

Would you consider the audio edition of The Ashford Affair to be better than the print version?

I switched between the audio and print versions (thanks to Whispersync ! ) and the story holds up either way. However, I loved the narration. Nicola Barber did an excellent reading.

I referred to this as a guilty pleasure. It's really just a romantic story, chick lit, even predictable, but the author was able to sustain the momentum of the narrative and keep the characters interesting. The excellent narration helped, too. Not great literature, but very entertaining.

Decent story, rather tedious to listen to

Narration is painful to listen. Narrator makes the voice of the female protagonist, a strong and a accomplished Manhattan attorney, sound like an insecure 12-yr-old.

I liked the concept and the narrator was very good. However, Clementine's chatacter was very immature and the narrator made her sound like a little girl. The dialogue between all of the other characters was interesting, but Clementine (at least via audiobook) sounded childlike and ridiculous.

Really not my style of book, somewhat droll, and predictable, despite the characters being well developed.