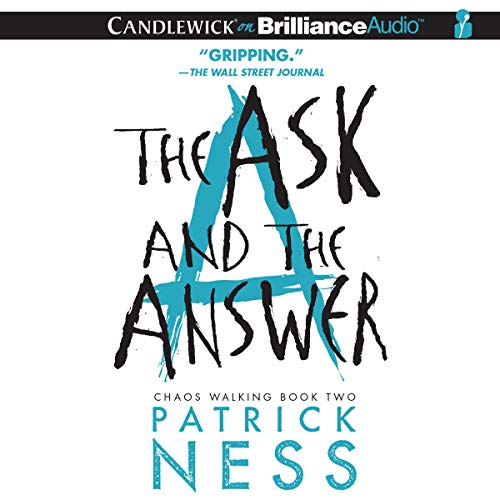 The Ask and the Answer

“Grim and beautifully written.... Superb.... This is among the best YA science fiction novels of the year.” (Publishers Weekly, starred review)

Reaching the end of their flight in The Knife of Never Letting Go, Todd and Viola did not find healing and hope in Haven. They found instead their worst enemy, Mayor Prentiss, waiting to welcome them to New Prentisstown. There they are forced into separate lives: Todd to prison, and Viola to a house of healing where her wounds are treated. Soon Viola is swept into the ruthless activities of the Answer, while Todd faces impossible choices when forced to join the mayor’s oppressive new regime. In alternating narratives the two struggle to reconcile their own dubious actions with their deepest beliefs. Torn by confusion and compromise, suspicion and betrayal, can their trust in each other possibly survive?

"Science fiction lovers will be looking for the next installment in this fast-paced and imaginative series." ( School Library Journal)

What listeners say about The Ask and the Answer

brilliantly done with two narrators!! I haven't read too many audio-books yet. but having two narrators is amazing. Beautiful performance from male and female voice is very pleasing to ears.

Wasn’t sure about two narrators ...

Part one only had one narrator so I wondered why we needed a female voice for this one, but it was skillfully done. I’m glad that choice was made!

Disappointmnet from the first book

This book could have been great, especially with the way it started. It picks up where the first book left off. It was going well until the second narrator came in, and she almost ruins the book. She mumbles about half her words, and pauses entirely to long in between words. The parts she reads are excruciating, and then when the narration goes back to the main character it gets good again. It just proves what a tremendous impact the narrator makes.

“We are the choices we make.”

Unfortunately not the fast paced thrill ride of a read that THE KNIFE OF NEVER LETTING GO was. No, THE ASK AND THE ANSWER (Chaos Walking #2) is a much slower story that is all about mind tricks, as Viola and Todd struggle under the thumb of their old enemy Mayor Prentiss.

Now newly self appointed President Prentiss flexes his control over the pair of teens as well as the rest of New World’s remaining population. Haven has been claimed and renamed New Prentiss Town and quickly becomes that of a police state of horrors under its new ruler and his army. All the men and women are once again separated including Todd and Viola. Despicable acts of evil and violence become part of daily life. With the threat of mutiny and war again rising on New World, Todd and Viola find themselves confused, beaten and trapped on different sides.

There is no question that Patrick Ness is an awesome writer with a completely original story to tell. The Chaos Walking Trilogy is one with a strong concept that is entirely unique and intriguing. And although I didn’t love this second much slower installment as I did the firs; I’m still hooked by the idea of a world trying to function under the duress of “noise”. The Chaos Walking series is definitely worth a look, especially under the skillful narration of the ever so talented Nick Podehl and this time’s added narrator Angela Dawe, as the voice of Viola.

Todd's Narration is Great; Viola's Not So Much

Would you consider the audio edition of The Ask and the Answer to be better than the print version?

I would consider reading the print version for this book. I love listening to Nick Podehl - he is really entertaining. But the narrator for Viola was just so dull. Everything she says is quiet and reserved, and maybe that's part of Viola's circumstance and personality, but man was it hard to listen to. I had a hard time staying interested during her chapters. Several times I had to turn off the book and turn on music when I was driving during her chapters because I felt myself becoming distracted or tired.

What was one of the most memorable moments of The Ask and the Answer?

Only 1/3 of the way through at this point.

I loved the first book - The Knife of Never Letting Go. Although I find this second book very interesting, it hasn't yet grabbed me in the same way. I think maybe it's because Manchee isn't around anymore, and also because many of the secrets have already been uncovered.

But it's still an entertaining book and much more original than some of the other YA fiction I've read.

While it had some weaknesses, the first book in this series, The Knife of Never Letting Go, won me over by telling an original story with some interesting themes, and keeping the level of tension high. In it, Ness imagined a planet colony of religious settlers that had come to start over with a low-tech life. But, oh, by the way, there was a war with the native aliens, all the women are dead, and everyone can hear everyone else’s thoughts, all the time. The main character, Todd Hewitt, begins to realize that he wasn’t told the whole truth, and ends up fleeing the dark designs of his town's leaders, several enemies hot on his trail.

This book picks up right where the cliffhanger ending of that one left off, and adds Viola's perspective to the story, alternating between it and Todd's (I don't think it's much of a spoiler to reveal that women weren't totally gone, since we learned this fairly early in the first book). However, where the Mayor was simply a sinister bad guy before, he becomes a more complex character -- still ruthless, but with a paternal, reasonable side that keeps us guessing. Meanwhile, an uprising against the Mayor/President begins, with the opposing leader showing a few ruthless streaks of her own. And Todd and Viola end up on opposite sides, split first by circumstance, then by an unforgivable atrocity that both factions blame on the other.

What I appreciated about this book was Ness’s front-and-center focus on the issue of how decent people get sucked into monstrous things. Todd doesn't trust the Mayor, yet finds himself being maneuvered into positions of greater responsibility, until he becomes too culpable in events to be able to simply walk away. Of course, the Mayor is manipulating him, letting Todd’s desire to feel like he has some level of control over things work into the Mayor’s own plans. Meanwhile, something similar happens to Viola over in the opposing camp, as she gets pulled into a campaign of bombing attacks against civilian targets. Both feel believably conflicted, yearning to be reunited, but also uncertain and angry over the other’s perceived choices.

I also liked the way the “noise” creates a different power dynamic between men and women, one gender having a hard time hiding its thoughts and emotions, while the the other remains unreadable. Hard to imagine that some men wouldn’t take to this loss of privacy and control with great anger, while the constant bombardment of male thoughts might drive women closer together. Not that Ness digs into this issue too deeply, but it’s an interesting backdrop.

On the down side, I thought the drama could be heavy-handed and I eventually had issues with the believability of the central villains, who are a little too cartoonish in some moments, a little too smart in others. The final battle featured some elements that seemed lifted from the Star Wars movies, but with more speechifying. Another complaint is Ness’s tendency to contrive sudden events that conveniently interrupt something else that’s happening.

Still, there are some effective moments in the story, such as scenes involving Todd and a labor detail of Spackle, the native aliens, and the character development of Davy, who starts off as an overbearing bully, but becomes more human and sympathetic later. And the harrowing ending sets up a lot of possibilities for the last book.

On the audiobook experience, I liked (as before) the personality Podehl gives to Todd’s voice, though moments when he yells “nooooooo!!” remind me, unfortunately, of Adam Sandler’s “they’re all gonna laugh at you!” skit. Angela Dawe does a decent but unremarkable job as Viola.

I ended up skipping entire chapters at the end. Patrick Ness must have had an editor who insisted upon a certain word count. The number of times characters call out each other’s names back and forth is just one indicator of this quota. Skip the whole book and move on to book 3.

Terrible predictability and uses every cliche.

The title of the review says everything you need to know about the story. You always know what's going to happen. The bad guy keeps coming back when you "think" he's dead. The main character keeps making the same lame type of decisions. When they need to run they sit and argue instead. Etc, etc, etc...

Definitely not as good as the first book. Starts out really slow and very hard to finish. The repetitive use of the same lines over and over again. Todd is a very unlikeable character and clueless in so many ways.

Performance was good on both parts.

Slow until the end!

This one was tough to finish. The end made up for it a little bit, but this book is pretty slow. The female voice is also not very exciting. Maybe that's how she read the character but it makes everything feel slower. The male voice is strong though. Will read the rest just to see what happens I guess.

Some parts were redubbed and it was distracting.

The story was quite immersive but there were points in the story where Todd would call the horse's name and it would be a totally different sound from the rest of the narration. It was quite distracting.

I so enjoyed the first book. I'm disappointed in the second mostly because there is too much trauma to likeable characters. I don't need hollywood stories and this is definitely not one; however, I don't want to be depressed reading/listening to a fictional story either.
I will listen to the third ( well, I bought it already and don't want to waste it) I hope for better in the third. Most trilogies I enjoy very much!