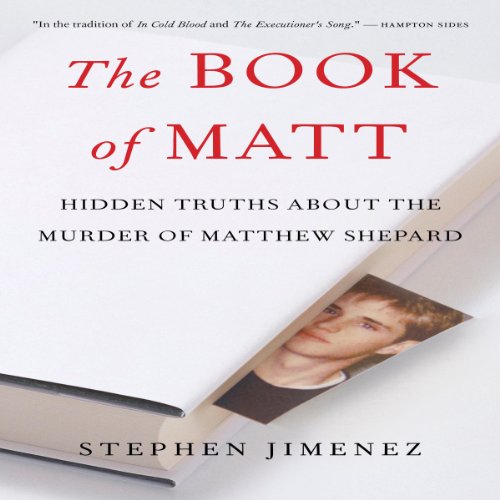 The Book of Matt

The Book of Matt

Late on the night of October 6, 1998, Matthew Shepard, a twenty-one-year-old gay college student, left a bar in Laramie, Wyoming with two alleged "strangers" Aaron McKinney and Russell Henderson. Eighteen hours later, Matthew was found tied to a log fence on the outskirts of town, unconscious and barely alive. He had been pistol-whipped so severely that the mountain biker who discovered his battered frame mistook him for a Halloween scarecrow. Overnight, a politically expedient myth took the place of important facts. By the time Matthew died a few days later, his name was synonymous with anti-gay hate.

Stephen Jimenez went to Laramie to research the story of Matthew Shepard's murder in 2000, after the two men convicted of killing him had gone to prison, and after the national media had moved on. His aim was to write a screenplay on what he, and the rest of the nation, believed to be an open-and-shut case of bigoted violence. As a gay man, he felt an added moral imperative to tell Matthew's story. But what Jimenez eventually found in Wyoming was a tangled web of secrets. His exhaustive investigation also plunged him deep into the deadly underworld of drug trafficking. Over the course of a thirteen-year investigation, Jimenez traveled to twenty states and Washington DC, and interviewed more than a hundred sources.

Who was the real Matthew Shepard and what were the true circumstances of his brutal murder? And now that he was larger than life, did anyone care? The Book of Matt is sure to stir passions and inspire dialogue as it re-frames this misconstrued crime and its cast of characters, proving irrefutably that Matthew Shepard was not killed for being gay but for reasons far more complicated - and daunting.

"Mr. Jimenez's book is most useful in illuminating the power of the media to shape the popular conception of an event. It shows how a desire for Manichaean morality tales can lead us to oversimplify the human experience. . . . Mr. Jimenez's findings cast doubt on what he calls the Shepard story's function as latter-day 'passion play and folktale.'" ( The Wall Street Journal)
“Now comes Stephen Jimenez with The Book of Matt, and this most detailed effort to rescue the protagonists from caricature is, with a few exceptions, being coolly ignored or pilloried for 'blaming the victim.' . . . Jimenez does not polemicize or tread deeply into the psyches of the main figures. Rather, he explores the drug-fueled world they inhabited, and evokes its thick air of violence. . . . Jimenez spent thirteen years to tell his story. . . In this story, Shepard and McKinney were neither lamb nor wolf; they were human commodities, working for rival drug circles to support their habits, and occasionally forced to pay their debts in sex... What impelled McKinney to loathe his desires, and Shepard relentlessly, dangerously to test himself, and Henderson to follow orders? Violence lacerated these young men long before the murder, and it will not be diminished or resisted by myths and vengeful laws." ( JoAnn Wypijewski in The Nation)
"Jimenez is careful to point out that his goal is to understand Shepard as a complex human being and make the fullest possible sense of his murder, not to suggest in any way that he deserved his horrific fate. . . . Jimenez’s problem is that he has trodden on hallowed ground. America, as John Ford cannily observed in his western The Man Who Shot Liberty Valance, is a country that likes to build up its heroes and villains and rarely appreciates having the record corrected to restore them to the stature of ordinary, fallible human beings. By now, Shepard’s story has been elevated close to legend, and Shepard himself to a near-messianic figure who suffered for the ultimate benefit of the rest of us. . . . Many of Jimenez’s central contentions are shared by the prosecutor in the case, Cal Rerucha, and by police officers who investigated the murder." ( The Guardian)

Powerful. After all the media lies, now the truth.

Wasn't sure what to expect from this book as so many "officially queer" orgs damned it. What a powerful indictment of the gay and media industry that lies and builds myths to fit the narrative. Brilliantly written and well researched, Jimenez brings the people and town of Laramie to life. And what a searing indictment of the meth and drug fueled life that is behind so many tragedies in America. What shocked me the most about the book was how little I knew of what was really going on. You really wonder who you can believe any more in the media industry. Gay rights? Please.

WHAT MADE THE EXPERIENCE OF LISTENING TO THE BOOK OF MATT THE MOST ENJOYABLE?
Paul Fleschner has an amazing voice. Before I purchase any book on audible I listen to the sample and decide if I can listen to the narrator for the number of hours listed! Time passes quickly and is entertaining when I listen to this narrator. I will buy more books narrated by Paul Fleschner.


WHAT OTHER BOOKS MIGHT YOU COMPARE THE BOOK OF MATT TO AND WHY?
"All the President's Men" by Bob Woodward and Carl Bernstein also gives a view of investigative journalism and how decisions are made to print as news, televise, or be published as a book. The authors of both books are scrutinized and feel pressured politically and socially. Though the truth they ultimately uncover may be painful and unwanted, they remain true to their calling.


WHICH CHARACTER – AS PERFORMED BY PAUL FLESCHNER – WAS YOUR FAVORITE?
In this book Paul Fleschner was the author, Stephen Jimenez, though he spoke at different times in the 'voice' of other intermittent characters. He was able to move smoothly from one to another. He has a special quality to his voice that commands attention, but is not overbearing; displays emotion, but doesn't over-do. I was captivated by the story, the mystery unfolding, because of the great narration.


WHAT’S THE MOST INTERESTING TIDBIT YOU’VE PICKED UP FROM THIS BOOK?
I learned about the Matt Shepard Foundation and the amazing things they have accomplished over the past 15 years since his death, including passage of the "Matt Shepard Act ". The discovery of additional information about him and the circumstances surrounding his violent murder doesn't diminish the good his family has done for Human Rights. Matt Shepard's flaws and poor decision-making only make him more real. I hope the website will expand its reach to include links for information and help for addictions if the investigative work of Jimenez is accepted. Meth, in particular, is creating a scourge on our society--it should not be ignored. As a high school teacher I have seen the affects of meth on our community ...devastation beyond comprehension.

ANY ADDITIONAL COMMENTS?
Jimenez innocently began preparation for a screenplay about the murder of a gay man that headlines reported as a 'hate crime'. His investigative integrity and curiosity led him on a journey of revelation he never imagined. He could have stopped investigating and let the manipulation and reality distortion of the press remain intact. The jury had put two men away for two life terms in prison for the horrific murder. But truth was something he was trained to seek and each crumb he discovered had to be pursued. Some were fruitful, some not, and much patience was required over the 13 years of research.

The truth honors Matt, The myth uses him.

If you could sum up The Book of Matt in three words, what would they be?

The fact that the writer is gay; and that a gay publication endorses it.

Which character – as performed by Paul Fleschner – was your favorite?

The moment it is revealed just how deep into the drug trade Mathew really was at the time of his death.

You can't take a tragedy, and twist the truth to further you own agenda. Very slimy.

Thank you for writing this book in such a compassionate and thoughtful way.

I lived in Wyoming for many years and had accepted the widely disseminated version of events surrounding Matthew Shepard’s horrific murder. And yet, somewhere in the back of my mind, the narrative that this was a hate crime stood juxtaposed with what I knew about my fellow Wyoming citizens. Fiercely independent and self-reliant, people in Wyoming tend to accept others in a “live and let live fashion.”

The author illuminated the shadows of this complex situation. Although learning of the different aspects of the truth doesn’t make this any less sad or disturbing, it helps to know that we as a nation have an epidemic drug problem and we are leaving generations of our children to find their own way. We need to solve these problems to save our kids from lives of recovery and incarceration.

This book was an exercise in exasperation.

What could Stephen Jimenez have done to make this a more enjoyable book for you?

Disappointment because he jumped all over the place saying the same thing 20 different ways.

I didn't even finish the book because I just could not listen to it anymore.

How to Maker Hero of Lowlife Meth Dealer

The book is valuable in showing how the death of a lowlife meth dealer/addict homosexual hustler was turned into a cause celebre by the gay/liberal establishment. Shepard was no hero, he was a deeply messed up semi-pro gay hustler and drug dealer, who got what criminals in that line of work often get - a nasty, sordid death. The author is to be commended for telling the truth. However, the book could have been cut by at least half and made the point. It repeats the same sordid scenes over and over (Matt and some of his buddies and an older drug dealer thug pervert getting "frisky" (author's word, not mine) in the back of a stretch limo, making runs to Denver to pick up and deliver crystal meth. Poor little Matt was not targeted by redneck cowboys who hated gays; he was beaten and killed by cowboy redneck fellow homosexuals for not paying up for the drugs he got on credit from them.
There is too much author intrusion for my taste. The author should stay in the background.

Great story! Almost like a murder mystery. Loves the narration and the bravery of the author.