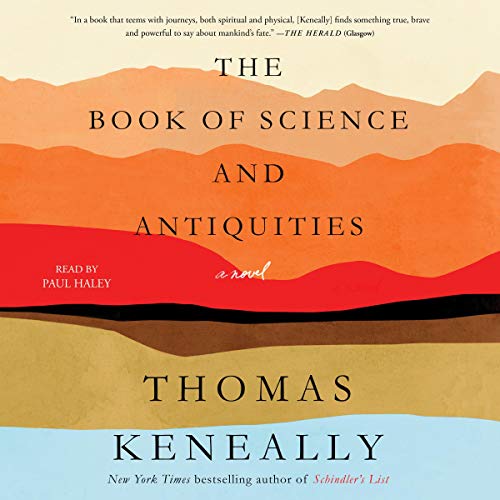 The Book of Science and Antiquities

The Book of Science and Antiquities

Thomas Keneally, the best-selling author of The Daughters of Mars and Schindler’s List, returns with an exquisite exploration of community and country, love and morality, taking place in both prehistoric and modern Australia.

An award-winning documentary filmmaker, Shelby Apple is obsessed with reimagining the full story of the Learned Man - a prehistoric man whose remains are believed to be the link between Africa and ancient Australia. From Vietnam to Northern Africa and the Australian outback, Shelby searches for understanding of this enigmatic man from the ancient past, unaware the two men share a great deal in common.

Some 40,000 years in the past, the Learned Man has made his home alongside other members of his tribe. Complex and deeply introspective, he reveres tradition, loyalty, and respect for his ancestors. Willing to sacrifice himself for the greater good, the Learned Man cannot conceive that a man millennia later could relate to him in heart and feeling.

In this “meditation on last things, but still electric with life, passion and appetite” (The Australian), Thomas Keneally weaves an extraordinary dual narrative that effortlessly transports you around the world and across time, offering “a hymn to idealism and to human development” (Sydney Morning Herald).

A novel nonsequential book that is 50% pretty good

Many modern fiction books use a framing device in which the story arc alternates between the "now" and some point in the past. Often they gradually working toward the revelation of some critical events that are created by actions in the past and motivate conditions in the now. It is so common as to be trite. Here the difference between the now and the past is 42,000 years, providing a novel twist on the trope. Is modern man really all that different from the early homo sapiens? Perhaps not. I loved the descriptions of prehistoric Australia and life in that time. It is refreshing to see both male and female characters in that period treated in a manner that is not condescending. How they lived, how they related to each other, and in some cases, how they died. The modern day narrative however, left the reader in the company of a self-important, deeply flawed person with whom I would not choose to spend 15 seconds, let alone four and a half hours. Toward the end of the book I just starting skipping through all of the modern day exposition on how wonderful he is, how insightful he is, how much better he is than ordinary humans (except for women who he treats like crap), to get back to 40,000 BCE. Maybe you will feel differently, but I was happy to get to the end of the book.