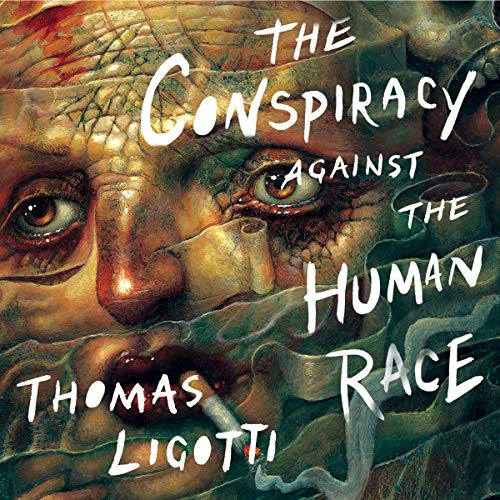 The Conspiracy Against the Human Race

Written by: Thomas Ligotti
Narrated by: Eric Martin
Try for $0.00

"There is a signature motif discernible in both works of philosophical pessimism and supernatural horror. It may be stated thus: Behind the scenes of life lurks something pernicious that makes a nightmare of our world."

His fiction is known to be some of the most terrifying in the genre of supernatural horror, but Thomas Ligotti's first nonfiction book may be even scarier. Drawing on philosophy, literature, neuroscience, and other fields of study, Ligotti takes the penetrating lens of his imagination and turns it on his audience, causing them to grapple with the brutal reality that they are living a meaningless nightmare, and anyone who feels otherwise is simply acting out an optimistic fallacy.

At once a guidebook to pessimistic thought and a relentless critique of humanity's employment of self-deception to cope with the pervasive suffering of their existence, The Conspiracy Against the Human Race may just convince listeners that there is more than a measure of truth in the despairing yet unexpectedly liberating negativity that is widely considered a hallmark of Ligotti's work.

What listeners say about The Conspiracy Against the Human Race

I found this both fascinating and oddly inspiring. Would recommend to anyone who doesn't mind taking the red pill.

Pretty scary to listen to on the way to your job. Is this the first non-fiction horror philosophy book?

A deeply brooding yet fascinating essay on the woes of human consciousness.

The horror of reality

For years, I’ve heard Thomas Ligotti’s name mentioned in regards to the horror fiction genre. He is, by all accounts, a master; however, this is his first non-fiction work. And it, too, is in the realm of horror.

Some people lose a loved one or experience some other tragedy and conclude that either God is evil, impotent, or disinterested. Others learn about the mechanisms of biological life and conclude that divinity has no hand in it.

However one gets there, once one arrives it can be freeing or depressing (and sometimes both). Ligotti explores various thinkers and philosophies relating to pessimism, nihilism, cosmicism, and even New Age thought. From Epicurus and Nietzsche to HP Lovecraft and UG Krishnamurti, you get a crash course in the futility and absurdity of not just the human condition — but life itself, in all its blind, chemical processes.

This was a unique experience. I don’t think I have ever read anything so bleak. I can’t point to any fact or premise that I can disagree with. You either live with the weight that we all carry or you don’t. It’s truly an reason to be kind to one another. We are all Fucked by every sense of the word. Even our noblest of intentions mean nothing. To give birth is a guarantee of doing harm. Who are we to put ripples in the floating dust? Our plight is like chasing windmills but not even windmills or knights matter.

I recommend this for very psychologically sound people who read Poe for an uplifting evening.

I need a drink and a smoke after this.

Not for the faint of heart.

This is a beautiful book in which your whole positive outlook on life is turned upside down and questioned from a pessimistic point of view.

We are only Human Beings. Ask anybody.

“Behind the scenes of life lies something pernicious that makes a nightmare of our World.” What, you might ask, could this horrible force be? Surprise answer: Consciousness, the villain of the piece. The fact that we are born knowing the we will die makes the whole enterprise meaningless.

Ligotti is a renowned author of supernatural horror stories, the places where we go to both confront and escape the reality of Death. So, in this first non-fiction work he has produced, he devotes three hundred pages to asking Why don’t we just disappear and return the Planet to its Natural State.

He bases his existential pessimism largely on the work of the Norwegian Philosopher, Peter Wessel Zapffe, Horror writer H.P. Lovecraft, Schopenhauer and others, to conclude that awareness of Death’s inevitability makes all other positions pointless. It’s not a happy read and it is amazing that it kept my interest for its complete length. But he makes a powerful case while admitting in the final chapter that Zapffe could shout his Philosophy from the rooftops and no one would listen because “We’re only Human Beings. Ask anybody.”

Don’t read this book on your Birthday!

I’ve always found myself to be a pessimist at heart and even hated myself for being so. This book put into words many thoughts and feelings that I have often had. It is not an uplifting book, but somehow I feel better coming face to face with the terms of my existence and accepting it for what it is. Suddenly the weight of decisions are lighter, because in the end they don’t matter and the futility of it all has pushed me to a more care free mood. I feel better about being a pessimist. (realist) I love this book.

This book is the uncompromising exploration of pessimism and nihilism I have ever read. It is penetrating and insightful. It stimulated a lot of thought as I listened to it. I would say that it is probably one of the most intellectually honest documents I have read.

An Honest Dive Into Pessimism

Citing influences within the horror genre and beyond, Thomas Ligotti explores the nature of the horror of being in this eloquent and cutting analysis of pessimistic existentialism. A must-read for weird-fiction buffs and existential enthusiasts alike.

I can smell the psychosphere. This is the ultimate guide to philosophical pessimism, and furthers my personal world view. Human consciousness was a mistake.

An interesting discussion on the pointlessness of existence and on horror as a literary genre. Recommend highly if you enjoy philosophy and nihilism, but do not recommend if you are in a bad place in life.

Every day, in every way, we are getting better.

5/5 makes me want to kill myself which is the point. incredibly dark and unrestrained look at the absurdity of consciousness.