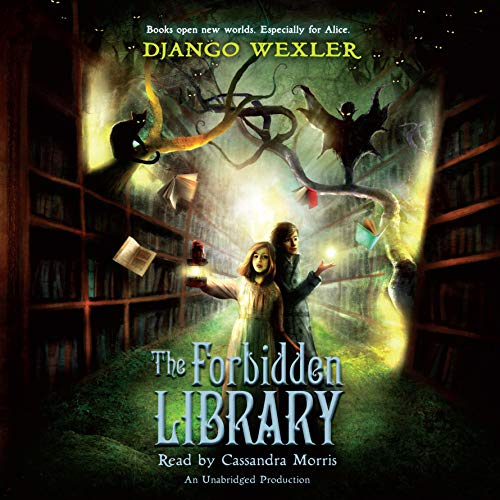 The Forbidden Library kicks off a brand new classic fantasy series perfect for fans of Coraline, Ink heart, and The Books of Elsewhere.

Alice always thought fairy tales had happy endings. That - along with everything else - changed the day she met her first fairy.

When Alice's father goes down in a shipwreck, she is sent to live with her uncle Geryon - an uncle she's never heard of and knows nothing about. He lives in an enormous manor with a massive library that is off-limits to Alice. But then she meets a talking cat. And even for a rule-follower, when a talking cat sneaks you into a forbidden library and introduces you to an arrogant boy who dares you to open a book, it's hard to resist. Especially if you're a reader to begin with. Soon Alice finds herself INSIDE the book, and the only way out is to defeat the creature imprisoned within.

It seems her uncle is more than he says he is. But then so is Alice.

"Vaguely reminiscent of Harry Potter, Alice in Wonderland, and Inkheart all rolled into one, it’s good fun.... Working in the grand tradition of children’s fantasy, Wexler’s off to a promising start." (Kirkus Reviews)

"Fans of Harry Potter and Cornelia Funke's Inkheart (2003) will relish that the library houses magical books.... It's a joy to watch the dutiful Alice develop her innate curiosity and become a proactive, resourceful heroine, matching wits with snarky cats, dangerous beasts, and a certain smug boy. This is a charming, adventuresome fantasy from a promising new author." (Booklist)

My Kids Loved It

They immediately asked why it had to end and were thrilled when I told them there is a second book.

loved the book and illustrations. can't wait for next one. definitely worth reading. great book

good story. It took me awhile to get thru it listening at night.
The narrator fid a nice job. I will get the next book.

Interesting creatures and "library books". Wish there was someone to trust for the main character...maybe there is and she just doesn't know it yet. Sure there should be a sequel.

it was ok but nothing very exciting happened. Some parts were good but most of it was crap.