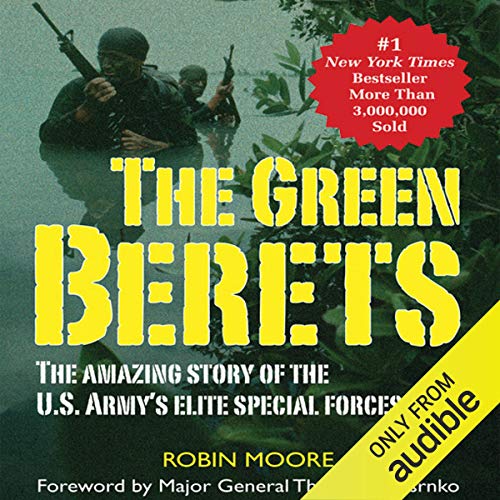 Written by: Robin Moore
Narrated by: Jim Frangione
Try for $0.00

Robin Moore became one of the first true embedded journalists by training with and fighting alongside the Green Berets in Vietnam. Though fictionalized, his work is an eye-opening exposé of the horrors of the Vietnam War and the basis for the hit John Wayne movie of the same title. Taut, fast-paced, and interspersed with unforgettable accounts of combat, Moore’s novel features an American major who goes "native" with Montagnard tribesmen, a courageous Vietnamese girl who poses as a rabid anti-American Communist to capture a murderous Viet Cong officer, and the unforgettable acts of courage of soldiers in the field.

What listeners say about The Green Berets

Green Berets Nam and beyond

Being a Green Beret Commo Man I identified with so very much coming out of Oki in 69 as a 05B/C as I did, Commo Men were hard to come by, and we shuffled thru POR near Kin Village and on to where ever we were needed, CCK, Thailand, Nam, Laos, Cambodia and this book although Fiction, was tight with a lot of truth...Much credit was given to both sides of SF, and about how ferocious in fact the VC were...Definitely not afraid to die for their Country...
I truly enjoyed this Audiobook and very well done and Moore was awesome...
Recommend anyone who is interested in SF and some Green Beret history needs to either read or listen up, it’s definitely five by...
1st & the 7th SFG(A)...

Stands the tests of ages

This is one of the classics as far as war fiction goes. Except, as the author notes, it isn't really fiction. The stories told in this tome may be altered to preserve confidences, but the events they describe are real. Within this novel you will find heroism and tragedy, and even love. The audible narration is particularly noteworthy for its professionalism; a true story time narration.

Too Bad, This novel missed it.

Well, it starts off with an hour of disclaimers, NDA -Non-Disclosure Agreements.
This is not a story with an arc of a story. No this is more of an events documentary. Of course, since it's all NDA the names and events are not the same but Maybe close to the actual activity, Ya, De, Da! So as you can tell I started off on a bad note, So I may be judging this book wrong. That being said I finished the book, and just said SMH, I want my 8 hours back.

Worst Naration I ever heard

I am a big history guy, with an extreme interest in the Viet Nam war. That being said, the reader in the book lost his place! Meaning, he sounded like the 1970's Saturday morning Godzilla cast. A story told by an American journalist with the grit and respect of the Group guys to be allowed out into the bush with them. Heck you couldn't tell who was who with this reader!
I just happen to be dumb enough and stubborn enough., if I start it I will finish it. Believe you me this book took all I had to do that.

The best Veitnam war book I have ever read.

I've read alot of book on the history of war and the us special forces (green berets and navy seals). This book is the best one about the veitnam war and the green berets. Tolded from a place of honesty and bluntness I can appreciate.

To much using Lords name in vain

There is no need to keep saying the Lords name in vain. I can understand the use of swear words in combat however the author seems to like using this phrase for any reason.

I never finished the book.

I first read this book 50 years ago

Not long after this book was published and the Vietnam war was in full swing, I read this book when in middle school.
In high school in East Oakland, CA as a young white teenager I found myself in Jr Army ROTC in charge of a company of 40 black youths off the streets, learned leadership from sergeant instructors just back from Vietnam.
A cousin who served in the Marine Corps with two years in Vietnam came to live with my family to readjust to peacetime life said this book told the real story of the war.
The truth about corruption in the command structure happening back then as my cousin related it first hand, and literally today hearing in a podcast Navy Seal Eddie Gallagher tell how he was hung out to dry by lies told and accepted by his command . . . Confirmed my decision to NOT join the military back then when my many Jr ROTC achievements made me a prime target for them.

Every American would be a better more well informed patriot to the purpose, role and stance these United States should take as a leader in the betterment of the quality of life of every living soul on this earth and the generations to come, by absorbing the stories of the individuals depicted in this book and the underlying message(s) herein. Through this work, I am reminded to remain truly thankful for the efforts and sacrifices of the men and women that train and work diligently and honorably in the protection and subsequent preservation of this republic in spite of the negative pressures put upon them from within and from without the DC establishments and all enemies foreign and domestic.

Moore says it how it is, or was. He tells us what really happened in Vietnam pre-Tonkin. He also tells us, correctly, how US leadership lost the war in Vietnam. The Special Forces had the right idea. Had they been allowed to keep going and been given free rein, the United States would have won in Vietnam.