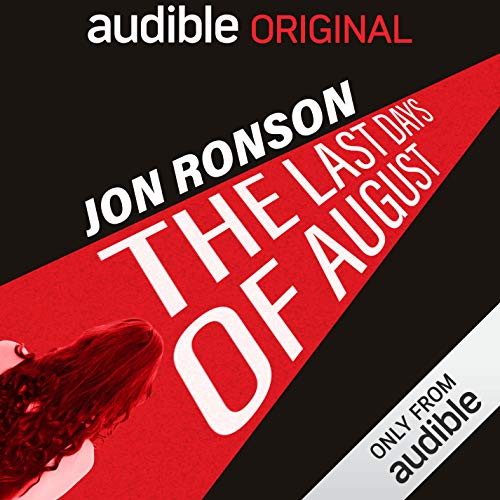 The Last Days of August

Listen to Clips from The Last Days of August

The issue with reporting discomfort.
-0.00

Behind the Scenes with Jon Ronson

''We started to hear rumours of a very different story. For instance, one of the people who piled in on August that day said to me, 'Somebody needs to look at August's relationship with her husband.'''
0:00

Jon Ronson is a critically acclaimed journalist, author, and screenwriter who has contributed to publications and broadcasts including This American Life, The New York Times Magazine, GQ, The Guardian, and more. His full-length nonfiction novels — So You’ve Been Publicly Shamed, The Psychopath Test, Them: Adventures With Extremists, Lost at Sea, and The Men Who Stare at Goats — have been translated into over 30 languages; many of them have been international best sellers. In 2017, Ronson created and recorded the Audible Original series The Butterfly Effect, a highly rated production that spent weeks on the top of the audiobook charts and was honoured as a finalist for the 2018 Non-Fiction Audie Award.

Jon Ronson, the creator of Audible Original The Butterfly Effect, delves into the pornography industry again as he unravels the never-before-told story of what caused a beloved 23-year-old actress’s untimely death.

A month later, August’s husband and pornography producer Kevin Moore connected with journalist Jon Ronson to tell the story of how cyberbullying via Twitter killed his wife. Neither of them could predict the rumours and secrets that Ronson would soon hear, revelations that hinted at a very different story — something mysterious and unexpected and terrible.

This is an Audible Original Podcast. Free for members. You can download all 7 episodes to your Library now.

Please note: This audio features sexual content, adult language, and references to suicide and violence that may be upsetting to some listeners. Discretion is advised.

If you or someone you know is struggling with thoughts of suicide, please call the Canada Suicide Prevention Service (CSPS) toll-free anytime at 1-833-456-4566.

What a great piece of journalism this story was! M. Ronson did an incredible job of finding everyone connected to August Ames (Mercedes) and getting them to offer their insights/ details to what type of person she was. Great audiobook as the original interviews with all the parties are included. This story plays out like an episode of Forensic Files. Tragic story with many tragic characters involved. My favourite audiobook on Audible thus far !

The story is tragic, but it is beautifully told.
it's a "chapter turner" podcast, i had to finish it in one day

The podcast started out good, there were hints at possible mystery or secrets. While there were things revealed, in the end it never made an impact on the conclusion.

This podcast didn’t really bring much new evidence or change perception. It just went into more detail about a bad situation. In the end, it kinda felt pointless

A great title for a great podcast

Excellent story, with a twist!

This is definitely worth checking out!

interesting and kind of sad

I struggle to find podcasts that I like but this was well told and held my attention throughout.

This was a very compelling and sad story

Jon's interview skills are intense. I can't imagine asking all those hard questions. My condolances to her loved ones. Hopefully some things in the industry can change so that these stories are a thing of the past.