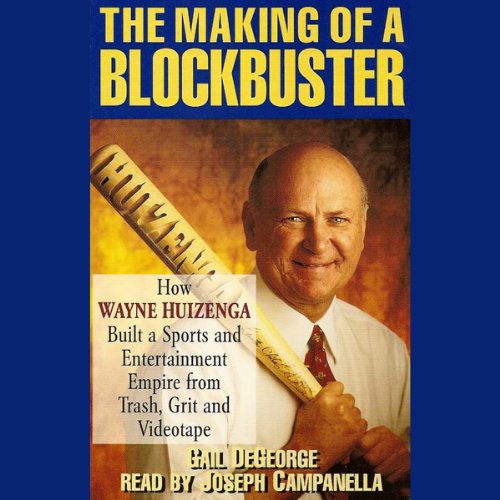 The Making of a Blockbuster

Written by: Gail DeGeorge
Narrated by: Joseph Campanella
Try for $0.00

How Wayne Huizenga Built a Sports and Entertainment Empire from Trash, Grit, and Videotape

Thirty-five years ago, Wayne Huizenga rose before the sun to run his garbage-collection route. Today, the sun never sets on the international Blockbuster Video empire he created, and he has emerged from the spoils of the Paramount/Viacom merger one of the most powerful and wealthy figures in the entertainment and sports businesses.

The Making of a Blockbuster explores Huizenga's strategy, management style, and deal-making acumen as it traces the evolution of his business empire through a quirky string of profitable ventures. Under Huizenga's guidance, Blockbuster grew from 19 stores to a chain of more than 3,700. And annual revenues leapt from $7 million to $2.6 billion. Huizenga is also the innovative owner of the Miami Dolphins, Florida Marlins, the Florida Panthers, and of Miami's Joe Robbie Stadium. And he has proposed a 2,500-acre sports and entertainment complex in Florida called Blockbuster Park - and aptly nicknamed Wayne's World. Where he'll turn next is anyone's guess, but it is sure to make headlines.

"DeGeorge, Business Week's Miami bureau manager, has covered Blockbuster and Huizenga for nearly 10 years, and recounts all this with prodigious detail. Her book will certainly appeal to those who are fascinated by entrepreneurial success stories." ( Booklist)

What listeners say about The Making of a Blockbuster

Thought it was good not great but lots of I iformation and deal making.

Good interesting bio- but unrelateable to someone interested in entrepreneurship. You learn about deal making and m&a but there is little takeaways for starting and growing business organically. Interesting story but a lot of stock wheeling and dealing

Great Audiobook but Story is too Biased

Yes. The book is too biased in favor of Wayne Huizenga. The book lacks credibility as a result. The performance of Joseph Campanella is great and makes the book very enjoyable.

Would you recommend The Making of a Blockbuster to your friends? Why or why not?

Yes. Despite the obvious bias this book is a great read for every entrepreneur.

What did you take away from The Making of a Blockbuster that you can apply to your work?

Have a game plan and just execute!