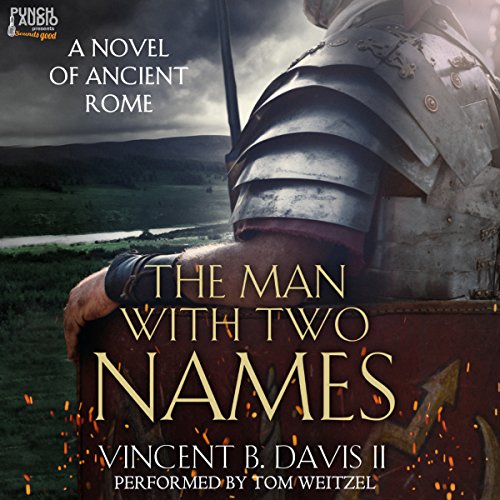 The Man with Two Names: A Novel of Ancient Rome

Quintus Sertorius has spent the first 20 years of his life training horses on his family farm, but this must end when his father dies and his village's political connections to Rome are severed. For the sake of his family, Quintus must leave his village for the Eternal City.

He begins his political career under the most influential men in Rome, but soon discovers that those in the Senate are less inclined to help him than he had hoped. His journey takes him from the corrupt and treacherous Forum to the deadly forests of Gaul, making powerful friends and enemies along the way.

What listeners say about The Man with Two Names: A Novel of Ancient Rome

forced myself to listen to two chapters. Terrible story that is terribly narrated. How it got published is a mystery

Your first person view of the Roman Republic

What did you love best about The Man with Two Names: A Novel of Ancient Rome?

An an amateur Roman History fan -- I loved how you are really experiencing, first-hand, in first person, how the Marian reforms affects every day roman life.

Gaius Marius in the flesh. Great dialogue and characterization of such a brash and interesting historical figure.

It wasn't long enough :). I want more. I really hope to see this materialize into a multi-book series with scrolls spanning everything from the Gracchi to the the rise of Augustus and beyond. Keep it up, very good stuff.

Yeesh this book is ROUGH.

Skip this one. The prose is dry, dull and tedious. The author especially needs to reconsider how they write dialogue.

could not stop. best read/ listen

loved it and was not looking forward to end. highly recommend +++ don't miss it!

I really love Roman military audiobooks. I have listened to so many of them. Many use modern military idioms to fill in for what we don't know about life in the Roman army. For my tastes this audiobook goes too far with that styling. Gaius Marius is transformed into a stereotypical Vietnam general and I often forgot that we were talking about Roman military matters rather than modern. This is heightened for me by the strong American accent utilized by the performer for some of the characters. I found that it really ruined the book for me. Some how the American twang is more difficult for me to suspend my disbelief around than the oft used British accents of the Simon Scarrow eagles series or I Claudius. I suggest a more neutral performance could improve this book immensely.

I loved the protagonist that was chosen and look forward to hearing more about the life of Sertorius in future instalments.

This book could have been much more enjoyable if the narrator's voice wasn't monotonous and if it did not sound as if he was a San Fernando Valley native. It was a distraction to the story such that I would pass upon any other book he has narrated. As for the story, it was only moderately interesting with little character development beyond the main two characters. Without giving away the ending, I was surprised when it arrived and felt like the author simply became tired and stopped writing.

Lesson learned-always check who is narrating

I had listened to the other books in this series which were narrated by Joshua Saxon prior to listening to this book. I find the stories interesting so I didn’t want to miss this first book. Most importantly, Joshua Saxon has an amazing voice for audible books, and it really comes through in this series.

I should have checked to see who narrated the story. I assumed that it was narrated by Joshua Saxon. It wasn’t. Shame on me. The narration is distractingly bad. So so bad. The narrator has an accent that I can’t quite place and very little variety in his voice when it comes to expressing various characters. The narrator does have very good annunciation and diction, but that is the extent of his skills for this book. This book needs to be redone by Joshua Saxon.

I didn’t find the story as strong as the subsequent books and the characters came off a little flat at times. I think the author improved over the series. If you’re questioning whether to listen to the next book, I would recommend it. Better story with better narration.

I felt like it was hard to follow. and the narrator had weird pauses in between some sentences, and then almost no pauses between others. I can't quite put my finger on what it was this book was missing but there was definitely something.

The narrator is as slow and plodding as the writing.
the writer wants the reader to FEEL the emotion and struggle in EVERY WORD.
Give it a pass.
The narrator and the boring dry writing, will be really useful for falling asleep.
Give her t a complete miss!;

I was absorbed by this book. the narrator was ok. I can't wait for the next book.